We will find out in the near future whether John McCain has a spine.

Not as a person, or an American, or as a soldier. He has plenty of backbone there, at least as a (ex-) soldier, but that doesn't really matter now.

We may have thought it wouldn't get worse when Presidential Press Secretary Sean Spicer on Thursday called the raid in Yemen- which resulted in the death of at least 15 civilians and a Navy Seal and loss of a tilt-rotor mV-22- "a successful operation by all standards."

Having not hit rock bottom, Spicer yesterday said the raid was

absolutely a success. And I think anyone who would suggest it’s not a success does disservice to the life of Chief Ryan Owens. He fought knowing what was at stake in that mission. And anybody who would suggest otherwise, doesn’t fully appreciate how successful that mission was, what the information that they were able to retrieve was and how that will help prevent future terrorist attacks.

Asked specifically about criticism from Senator McCain, Spicer continued his descent, responding  “I think anybody who undermines the success of that raid, owes an apology and disservice to the life of Chief Owens.”

Don't blame Spicer, however. He says what he's expected to say, as Homeland Security director John Kelly has learned, and was demonstrated when

“Sen. McCain should not be talking about the success or failure of a mission to the media. Only emboldens the enemy! He's been losing so long he doesn't know how to win anymore,” Trump wrote in a series of tweets Thursday morning. “Just look at the mess our country is in - bogged down in conflict all over the place. Our hero Ryan died on a winning mission ( according to General Mattis), not a 'failure.' Time for the U.S. to get smart and start winning again!”

It should have crossed Trump's mind that the enemy- the media, workers, consumers, minorities, whomever Trump perceives it as today- already had heard about the raid.  But one of the guiding aims of this Administration is to keep information away from the American people, so never mind.

Nonetheless, this should remind Senator McCain of the contempt that Donald Trump, he of the five Vietnam-era deferments, has for military personnel at all sorts.   He bragged in 1997 “It’s amazing, I can’t even believe it. I’ve been so lucky in terms of that whole world, it is a dangerous world out there. It’s like Vietnam, sort of. It is my personal Vietnam. I feel like a great and very brave solider." He boasted during the campaign "I know more about ISIS than the generals do, believe me." Earlier during the campaign, he had stated “He’s not a war hero. He was a war hero because he was captured. I like people who weren’t captured.”

He's a loser, Trump infers in his all-purpose insult to those individuals who aren't as strong as, say, Vladimir Putin (and the other dictators he admires).

Trump now has slammed McCain again, something the Arizona senator should remember and be guided by.  Though McCain votes for every Trump cabinet nominee (and will vote for Judge Gorsuch), as a staunch hawk he has been critical of the Trump/Putin nexus. Following an early January hearing in which the Armed Services Committee heard testimony about Russian cyber-espionage, McCain commented  "Every American should be alarmed by Russia’s attacks on our nation. There is no national security interest more vital to the United States of America than the ability to hold free and fair elections without foreign interference."

Following the hearing, the Los Angeles Times' David Horsey (his cartoon, below) recognized

Luckily, there is McCain — plus other old-school conservatives like South Carolina Sen. Lindsey Graham who have expressed their guarded concern. What about when they are unguarded? When they are talking privately, what are they saying? How great is their alarm? What will they do to defend their country from a man for whom “intelligence” is a dirty word? What will honor demand of John McCain?

Four weeks later, those questions remain. McCain reacted to Spicer with "my record speaks for itself." However, Donald Trump, now the leader of the still-Free World, continues to demean the Arizona senator, who served his country bravely nearly a half-century ago.

President Trump is now daring him to step up again but believes he is able to intimidate everyone into submission. The senator has the unique opportunity, motive, and the duty to country to challenge the would-be autocrat while it's still possible for someone to do so. We will see if he has the spine. 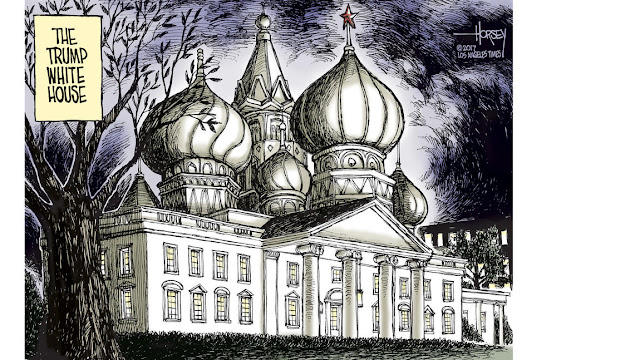