A couple of weeks ago, David Frum painted a dystopian portrait of the future in which "it's 2020, and President Donald Trump will shortly be sworn in for his second term."  The nightmare includes a landscape in which

The media have grown noticeably more friendly to Trump as well. The proposed merger of AT&T and Time Warner was delayed for more than a year, during which Time Warner’s CNN unit worked ever harder to meet Trump’s definition of fairness. Under the agreement that settled the Department of Justice’s antitrust complaint against Amazon, the company’s founder, Jeff Bezos, has divested himself of The Washington Post. The paper’s new owner—an investor group based in Slovakia—has closed the printed edition and refocused the paper on municipal politics and lifestyle coverage.

If Saturday's Washington Post is any indication, it is halfway there.

At Thursday's news conference, President Trump repeatedly referred to "fake news,"  an all-purpose rationalization. Trump particularly hates one network, perhaps because it reminds him of himself: "I mean, I watch CNN, it's so much anger and hatred and just the hatred."

More so, the press is generally being scapegoated. The President maintained "Russia is fake news. Russia -- this is fake news put out by the media."  Moreover, "it was all a, you know, fake news, fabricated deal, to try and make up for the loss of the Democrats and the press plays right into it."

"Fake" evidently can be rolled out as an adjective to discredit anything, given that Trump claimed "I said to somebody that was in the room, I said 'you take a look at Reince, he's working so hard just putting out fires that are fake fires.' I men, they're fake. They're not true."

Or it can be a ready made excuse for failure, as in Vladimir Putin is "sitting behind his desk and he's saying 'you know, I see what's going on in the United States, I follow it closely. It's going to be impossible for President Trump to ever get along with Russia because of all the presure he's got with this fake story.'"

But whenever you think Donald Trump has hit rock bottom, it turns out to have been a false bottom. On Friday, he tweeted (capitalization his) "The FAKE NEWS media (failing @nytimes, @NBC News, @ABC, @CBS, @CNN) is not my enemy. It is the enemy of the American People!" (For NBC, it's only its news division because Trump is still getting paid from its entertainment division. The man may be ignorant, even slightly deranged, but he's not stupid.)

As Trump himself would say were it not about him- "some say" that has fascist overtones. The media may hear "nice little news operation you have there- it would be a shame if one of those Americans thought I was serious about that 'enemy' thing."

It could happen. Ryan Lizzaa tweets "Not the front-page photo I was expecting the day after Trump calls the media the enemy": 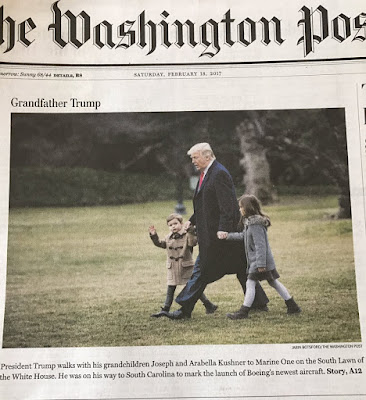 In a story which has a happy ending, Jim Rutenberg notes

This is how the muzzling starts: not with a boot on your neck, but with the fear of one that runs so deep that you muzzle yourself.

Maybe it’s the story you decide against doing because it’s liable to provoke a press-bullying president to put the power of his office behind his attempt to destroy your reputation by falsely calling your journalism “fake.”

Maybe it’s the line you hold back from your script or your article because it could trigger a federal leak investigation into you and your sources (so, yeah, jail).

Or, maybe it’s the commentary you spike because you’re a publicly supported news channel and you worry it will cost your station its federal financing.

Although the front page photo in The Washington Post probably was accompanied by the paper's usual objective, stellar reporting, the adage remains "a picture tells a thousand words." Notwithstanding the photograph showing an elderly man apparently pained to be holding the hands of two young children, the image will linger as a grandfatherly one while serving no useful journalistic purpose.  We can only hope this is but a blip because the fourth estate is one of the few institutions standing between the American people and the plans of  Donald Trump, Steve Bannon, and others for a country hitherto unimaginable.