A Tale Of Two Pauls, With A Rick Thrown In


Many essays have been written commenting on Paul Ryan's recent remarks about inner-city culture. Perhaps the best is that of Paul Krugman in The New York Times. With my perspective following, here is Krugman's full column:

There are many negative things you can say about Paul Ryan, chairman of the House Budget Committee and the G.O.P.’s de facto intellectual leader. But you have to admit that he’s a very articulate guy, an expert at sounding as if he knows what he’s talking about.

So it’s comical, in a way, to see Mr. Ryan trying to explain away some recent remarks in which he attributed persistent poverty to a “culture, in our inner cities in particular, of men not working and just generations of men not even thinking about working.” He was, he says, simply being “inarticulate.” How could anyone suggest that it was a racial dog-whistle? Why, he even cited the work of serious scholars — people like Charles Murray, most famous for arguing that blacks are genetically inferior to whites. Oh, wait.

Just to be clear, there’s no evidence that Mr. Ryan is personally a racist, and his dog-whistle may not even have been deliberate. But it doesn’t matter. He said what he said because that’s the kind of thing conservatives say to each other all the time. And why do they say such things? Because American conservatism is still, after all these years, largely driven by claims that liberals are taking away your hard-earned money and giving it to Those People.

Indeed, race is the Rosetta Stone that makes sense of many otherwise incomprehensible aspects of U.S. politics.

We are told, for example, that conservatives are against big government and high spending. Yet even as Republican governors and state legislatures block the expansion of Medicaid, the G.O.P. angrily denounces modest cost-saving measures for Medicare. How can this contradiction be explained? Well, what do many Medicaid recipients look like — and I’m talking about the color of their skin, not the content of their character — and how does that compare with the typical Medicare beneficiary? Mystery solved.

Or we’re told that conservatives, the Tea Party in particular, oppose handouts because they believe in personal responsibility, in a society in which people must bear the consequences of their actions. Yet it’s hard to find angry Tea Party denunciations of huge Wall Street bailouts, of huge bonuses paid to executives who were saved from disaster by government backing and guarantees. Instead, all the movement’s passion, starting with Rick Santelli’s famous rant on CNBC, has been directed against any hint of financial relief for low-income borrowers. And what is it about these borrowers that makes them such targets of ire? You know the answer.

One odd consequence of our still-racialized politics is that conservatives are still, in effect, mobilizing against the bums on welfare even though both the bums and the welfare are long gone or never existed. Mr. Santelli’s fury was directed against mortgage relief that never actually happened. Right-wingers rage against tales of food stamp abuse that almost always turn out to be false or at least greatly exaggerated. And Mr. Ryan’s black-men-don’t-want-to-work theory of poverty is decades out of date.

In the 1970s it was still possible to claim in good faith that there was plenty of opportunity in America, and that poverty persisted only because of cultural breakdown among African-Americans. Back then, after all, blue-collar jobs still paid well, and unemployment was low. The reality was that opportunity was much more limited than affluent Americans imagined; as the sociologist William Julius Wilson has documented, the flight of industry from urban centers meant that minority workers literally couldn’t get to those good jobs, and the supposed cultural causes of poverty were actually effects of that lack of opportunity. Still, you could understand why many observers failed to see this.

But over the past 40 years good jobs for ordinary workers have disappeared, not just from inner cities but everywhere: adjusted for inflation, wages have fallen for 60 percent of working American men. And as economic opportunity has shriveled for half the population, many behaviors that used to be held up as demonstrations of black cultural breakdown — the breakdown of marriage, drug abuse, and so on — have spread among working-class whites too.

These awkward facts have not, however, penetrated the world of conservative ideology. Earlier this month the House Budget Committee, under Mr. Ryan’s direction, released a 205-page report on the alleged failure of the War on Poverty. What does the report have to say about the impact of falling real wages? It never mentions the subject at all.

And since conservatives can’t bring themselves to acknowledge the reality of what’s happening to opportunity in America, they’re left with nothing but that old-time dog whistle. Mr. Ryan wasn’t being inarticulate — he said what he said because it’s all that he’s got.

Krugman is correct:  articulate Paul Ryan has the knowledge class convinced he knows what he's talking about; Ryan's citation of Charles Murray, known best for contending that black I.Q. is inheritable, belies any claim he wasn't thinking about race; tea party "populists' have taken a pass on calling out specific misdeeds of the corporate sector; the "welfare cheat" meme, when popular decades ago, was exaggerated and is even less accurate now; the degree of economic opportunity was exaggerated in the 1970s and has fallen since; Ryan couldn't find space in a 205-page report about poverty to mention falling wages; and this is a dreadful run-on sentence.

More questionable, however, is Krugman's contention

Instead, all the movement's passion, starting with Rick Santelli's famous ran on CNBC, has been directed against any hint of financial relief for low-income borrowers. And what is it about these borrowers that make them such targets of ire? You know the answer.

Well, no I don't, because I think Krugman evidently believes the subjects of the venom (video, below) are minorities, especially blacks (or blacks exclusively). I don't think that's at all clear, however.

Certainly Santelli, a guy who like Paul Ryan is expert at sounding as if he knows what he's talking about, attacked the "other."  But the other, in the mind of most (white) Americans need not be minorities.  Individuals in this nation don't consider themselves lower-class, but middle-class. And if they are forced to admit they are of lower-income, they don't identify with that status.  They are middle-class (or so they believe).  When Santelli rails against low-income borrowers, he strikes a chord in people who resent others.  And others could be white- they could in fact be their neighbor or, even more likely, the faceless people down the street or in the next town over.  What they could not be is their close friends, immediate relatives, pastor, or especially, themselves. It's always somebody else, especially if he or she doesn't have a face or a name.

At approximately 1:10 of the video below, Santelli turns to his audience of traders and rhetorically asks "how many of you people want to pay for their neighbor's mortgage that has an extra bathroom and can't pay their bills?"  He's not referring specifically to minorities or even to poor people, but rather to individuals who can afford a house with a bathroom, maybe two. Further, in the minds of many (white) Americans, minorities don't even have to pay bills- the government pays for them.

Similarly, when Santelli claims "you can go down to minus-2% (mortgage)- they can't afford the house," he's referring to consumers in general, not solely ones of low income.   Conveniently, both statements feed into the "entitlement" ruse. Conservatives and neo-liberals refer to Social Security and Medicare as "entitlements" not only because they (rightly) fear they will incur voters' wrath by saying they want to cut "Social Security" and "Medicare." They know also there is a vague sense (though largely inaccurate) that "others"- everyone not in the voter's inner circle- are getting away with something to which they arrogantly believe they're entitled. (They also technically are "entitlements" according to congressional nomenclature, but nobody knows what constitutes "entitlements," anyway. Or what the heck "nomenclature" is.)

In the following graph from Business Insider (culled from a few misleading graphs), we get an idea of what the cumulative income of the people for whom Santelli posed as defenders earn- compared to the income of the individuals he really was speaking for. 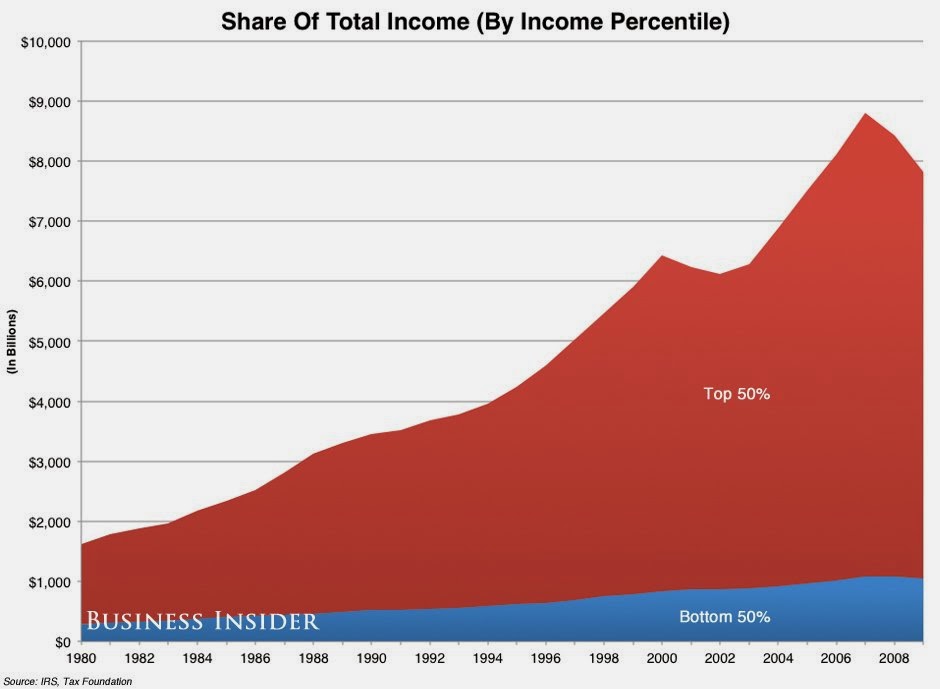 And this refers merely to income- not to wealth, in which the disparity is even greater- which renders Krugman's argument even more relevant and piercing.  Paul Krugman is about 97% on target, which even Peyton Manning would be proud of.