It's Just The Man's Style


Paul Ryan is an important man.  As chairperson of the House Budget Committee, he soon will be rolling out the Repub budget proposal, which will be heavily influenced by a 204-page document, "The War on Poverty: 50 Years Later," he rolled out earlier this month.  It blamed poverty on- wait for it- poverty programs, neglecting to mention the growing national divide between the rich and poor.  And he is (as he has been, notwithstanding Chris Christie), along with Scott Walker and Marco Rubio one of the three leading candidates for the GOP presidential nomination. (Alert Chris Cilllizza, who's imagining things.) More recently, he provoked controversy for his remarks suggesting culture in the inner city has created generations of men who aren't working or even "thinking about work."

Joan Walsh has called Ryan out, in part for citing the work of Charles Murray, who believes in the "inherent" inferiority of blacks, a good reason for cynicism about the Wisconsin congressman.  Aside from his antiquated view of race, Murray is stunningly (though, considering the source, not surprisingly) dishonest. Walsh points to Murray's claim "In all the critiques of The Bell Curve in particular and my work more generally, no one ever accompanies their charges with direct quotes of what I’ve actually said."  But Walsh notes that she has "written about Murray’s work extensively, and with lavish documentation and direct quotes (and I’m not the only one)" and "debated Murray on WBUR in 2012."

In the explicitly racial "The Bell Curve," Murray argued "if the reader is now convinced that either the genetic or environmental explanation has won out to the exclusion of the other, we have not done a sufficiently good job of presenting one side or the other. It seems highly likely to us that both genes and the environment have something to do with racial differences."   After Murray wrote "The Bell Curve" and then "Coming Apart," he wrote "Losing Ground: The State of White America, 1960-2010,:  Upon its publication, in which he contrasted "Fishtown" (based on a working-class Philadelphia neighborhood of the same name) with Belmont, Massachusetts, the author stated in an online chat

We’re talking about IQ more than culture. It helps to be living in a neighborhood where smart actions about money are common, but the main breakdown is IQ. Lots of smart people in Fishtown do the right thing, but (politically incorrect warning) there are more smart people in Belmont than in Fishtown.

As the above suggests and despite protestations to the contrary, so much of Murray's work relies on genetics rather than culture, nature rather than nurture.

But it speaks also to an intellectual dishonesty which extends to one of his followers.  In Ryan's recent 200+ page report (photo below from Reuters via Salon, 8/12),  he cited the work of many academic researchers, among them Jane Waldfogel, Barbara Wolfe, Jeffrey Brown/Amy Finkelstein (who worked together), and William Karnes. Each of them says Ryan "misunderstood or  misinterpreted their research," in the words of The Fiscal Times.

And let's not forget the vice presidential nomination speech, in which the congressman spoke, according to the Center for American Progress, at least six lies.  Three (see 1, 4, and 5) were merely misleading and self-serving; two, however, were untruths deliberately uttered.

Representative Ryan falsely stated that Senator Obama while campaigning for president promised that a General Motors plant, which later was shuttered, would not be closed down.   Also, he claimed Obama had accumulated “More debt than any other president before him, and more than all the troubled governments of Europe combined," which was objectively, demonstrably, numerically untrue, a reprehensible lie for most politicians, more so for the chairperson of the House Budget Committee.  He charged also "What did taxpayers get out of the Obama stimulus? More debt.  That money wasn’t just spent and wasted, it was borrowed, spent and wasted."  But given that an estimated 1-3 million jobs were created, it's incomprehensible that the money was "wasted."  (Neither is it likely, for the same reason, that it created additional debt.)

Perhaps "borrowed, spent and wasted" would have been the fate of stimulus money Representative Ryan himself requested, funds he denied requesting until proof was presented. Even then, he passed it off as "constituent service requests," close cousin to "it depends on what the meaning of 'is,' is."

One of the items cited by CAP, though not a formal lie, ironically calls attention to the mission of this Ayn Rand disciple.   The man who idolized the apostle of selfishness proclaimed "The greatest of responsibilities is that of the strong to protect the weak," a remarkable comment from a politician who has dedicated his career to strengthening the powerful and condemning the powerless. 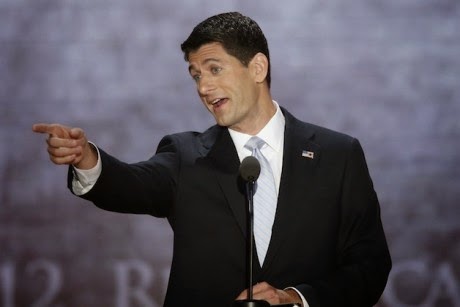