Missing The Mark- By A Lot

Staffers for the San Jose Mercury News have written that State Senator Leland Yee is in trouble with federal law enforcement authorities:

In a stunning development that almost certainly torpedoes Yee's quest for statewide office, the San Francisco Democrat wound up glum and disoriented in a federal courtroom Wednesday. The politician who introduced anti-gun-violence legislation is now charged with trafficking in firearms and public corruption in an FBI undercover operation that could land him in prison for years.

...Yee is depicted in a startling, 137-page FBI affidavit of repeatedly offering to broker illegal firearms sales in exchange for campaign contributions. He allegedly took part in dealmaking meetings with undercover agents....

Yee is linked to a host of wrongdoing to pad his political warchest, charged with seven felonies in a case with two dozen defendants accused of everything from money laundering to murder-for-hire. The defendants include Raymond "Shrimp Boy" Chow, a reputed ringleader of a Chinese syndicate federal investigators have been trying to crack since the late 1980s.

A federal magistrate judge released Yee on $500,000 bond, and he brushed past a swarm of reporters and left the courthouse in a dark blue BMW. Paul DeMeester, Yee's lawyer, said he was encouraged the senator was released and added: "The future will hold a lot of work."

The government's case will no doubt be challenged as the case unfolds. It rests largely on the FBI's accounts of Yee's meetings with undercover agents, which include alleged attempts to improperly land cash for his current secretary of state campaign.

But as recently as last month, Yee was engaged in the secretive meetings, at one point telling an undercover operative with whom he was trying to cut an arms deal that he was ready to cash in on his connections in Asia if he lost his current bid to become secretary of state, according to court papers.

The feds are busy in the south, also as The Charlotte Observer on Thursday reported

Patrick Cannon, who rose from public housing to become mayor of North Carolina's largest city, was arrested Wednesday by the FBI and accused of accepting tens of thousands of dollars in bribes – including $20,000 in cash delivered in a briefcase last month to the mayor's office.

Cannon, a 49-year-old Democrat who took office only four months ago, was scheduled to show up at a luxury apartment in SouthPark for yet another payoff from what he thought were businessmen needing his influence in city matters, the affidavit says.

But after arriving, Cannon learned who they really were, a source confirmed: undercover FBI agents who'd been recording their meetings over the past three years....

Steve M., who follows right-wing Repub pundits so you (and I) don't have to, found that in the space of fifteen minutes on Thursday afternoon, Michelle Malkin issued four tweets:

Why is Obama's FBI publicizing all of its raids/probes on Democrat politicians now? Answer: Clearing the decks before midterms.

Prediction: Obama/Holder's DOJ is saving up FBI goods on GOP corruptocrats for release right before election for maximum distraction/damage.

There's always an ulterior motive w/Obama/Holder DOJ. I see right thru this latest round of Corruption Crackdown Kabuki Theater. Don't you?

It's Chicago on the Potomac, people.

Four, really? In rapid succession?  She has to get a life.  One of Malkin's followers, M. found, promptly tweeted "You gotta hand it to them.  Cleans house prior to '14 and distracts from 31 March 'deadline.'"  S.M. comments

That's right: arresting fellow pols on corruption charges is proof of corruption. The fact that the arrestees are fellow Democrats is proof of naked partisanship. Ruining these people's political careers and probably sending them to prison for many years is "Kabuki theater."...

That's right -- the whole point of these multi-year investigations and arrests was to distract us from Obamacare this week! It all makes sense now!

There are reasons aside from merit for investigations by law enforcement. But a Democratic administration pursuing Democratic officeholders for alleged corruption is anything but partisan.  It's analogous to the situation in New Jersey, where then-U.S. attorney Christopher J. Christie went after a few Republicans, including Jim Trefffinger and Robert Stears- who were of no use to him- with highly publicized charges and indictments geared for maximum political effect.  He strategically targeted some politicians and protected others, the latter ones individuals who could assist his rise to political power.  As one Republican State Senator put it, "He knows where the power is and goes to the power, whether that power is a Republican or Democrat."  Only now are people connecting the dots and realizing Christie is a thug, and even now few people accused Christie of being particularly partisan.

Prosecutorial discretion is a wonderful thing, if you're a prosecutor (cartoon below from The Economist).  An insightful blogger, noting that if convicted, Patrick Cannon is likely to do serious time and be fined many years' worth of income, remarked

Meanwhile, retired Bank of America CEO Ken Lewis and the bank itself settled a civil lawsuit today with the New York attorney general’s office that had alleged securities fraud. Specifically, Lewis and the bank were accused of deceiving BoA stockholders about what crappy shape Merrill Lynch was in when the bank asked stockholders to approve a takeover of Merrill in December 2008. This transaction played a nontrivial role in blowing up the economy, although that demolition was well under way when the sale closed on Jan. 1, 2009.

Neither Lewis nor the bank is required by the settlement to admit any wrongdoing. The bank will have to pay $15 million. Lewis himself will have to pay $10 million, although that’s the equivalent of zero days’ worth of income for him because the bank will pay it for him. Given the bank’s net earnings of $4.2 billion in 2012 (the 2013 annual report is due out any day), those fines amount to about two days’ profits, give or take. That’ll certainly warn all the other banks not to screw their shareholders, I think.

Oh, and Lewis is personally barred for three years from serving as an officer or director for any publicly traded company. Which is really going to cramp his style because he’s, you know, retired.

So:
Criminal charges vs. civil.
Prison and a significant fine vs. no prison and a trivial fine.
A guilty verdict or guilty plea vs. no admission of guilt.
Prison (again) vs. an order not to do something he probably wasn’t going to do anyway.

What have we learned from this experience?
We’ve got one set of rules for banksters, and another set for everybody else, including mayors of major cities, you, and me.
There is a club. You and I are not in it.

Unfortunately, Michelle Malkin and other conservative talking and writing heads, if not in the club, support the club.  And if they can keep attention focused on the evil Democrats in Washington, their followers won't understand how the playing field is tilted. And it's not tilted toward the likes of Cannon, Yee, or Holder.  Michelle Malkin et al. could do their followers a favor by pointing out the overzealousness of the FBI or federal prosecutors. Or if their only motive is to criticize President Obama, they might note that the absence of prosecution of bank executives for bringing the economy and the nation to their knees. Or they might recognize that the raids on marijuana dispensaries in states which have legalized medical marijuana run contrary to the GOP's old-fashioned belief in states' rights. Alas, they seemed to have rediscovered federal sovereignty when it comes to personal use of marijuana, an indication that corporate America fears legalization of the substance.

But, no. Because if criticism of an action is called for, you can bet conservatives will criticize it for the wrong reason.  It's nearly  as safe a bet as the sun rising in the east and setting in the west. 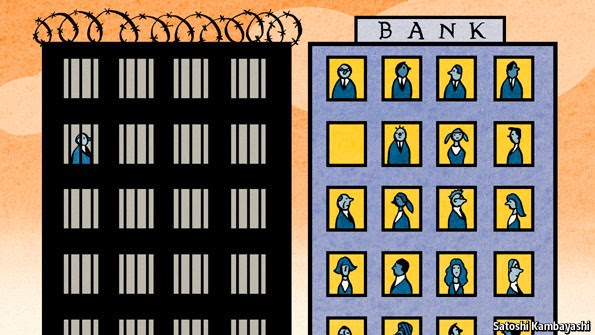