Still owned by the the cultic Unification Church, The Washington Times presented a slanted portrayal of a discussion (video at end) on Friday's Real Time with Bill Maher. Nonetheless, it is true that Maher

started off the segment with Mr. Ryan's recent comments about inner city overty and the cultural dynamics that perpetuate such cycles. The HBO host then asked if Mr. Ryan was simply making an honest observation or something motivated by racial ill will.

Comedian W. Kamua Bell intimated that some sort of racial malice was involved.

Then the "Real Time" host tricked his guests, saying: "let me read something else. Here's something else Paul Ryan said. He said: "When it comes to getting an education, too many of our young people just can't be bothered. They're siting on couches for hours playing video games, waching TV instead of dreaming of being a teacher or a lawyer or a business leader they're fantasizing about being a ball or a rapper.' Oh wait, that wasn't him . That was Michelle Obama, Michelle Obama said that."

The camera showed Mr. Bell stunned, at which point Mr. Maher turned to the audience and said" "Hushed silence! (....) Is something less true if a white person says it about black people?"

We talk to each other differently than when we talk to (white people)," Mr. Bell responded

Uh, Mr. Bell: this was not a discussion between two young people in a college dorm, two adults in a bar, or even between Michelle and Barack in the presidential bedroom. It was a commencement speech, at Bowie State University (admittedly, an historic black college) in Maryland, last May.  There is something called the "internet" and it's not likely that anything said in public by the First Lady of the United States is going to remain private for long.

Michelle Obama's statement, however, came in the context of reminding her audience of the great strides made against tremendous odds by black Americans to obtain credible education in primary and secondary education and at the collegiate level over the decades. She stated

In one Eastern Shore town, a teacher reported to work one morning to find that someone had smashed the windows of her schoolhouse.  Other black schools across Maryland were burned to the ground.  Teachers received death threats.  One was even beaten by an angry mob.  But despite the risks, understand, students flocked to these schools in droves, often walking as many as eight to ten miles a day to get their education.  In fact, the educational association that founded Bowie State wrote in their 1864 report that -- and this is a quote -- “These people are coming in beyond our ability to receive them.”  Desperately poor communities held fundraisers for these schools, schools which they often built with their own hands.  And folks who were barely scraping by dug deep into their own pockets to donate money.

So to the folks who showed up to your school on that January day back in 1865, education meant nothing less than freedom.  It meant economic independence, a chance to provide for their families.  It meant political empowerment, the chance to read the newspaper and articulate an informed opinion, and take their rightful place as full citizens of this nation.

"So back then," she said,  "people were hungry to learn," and she eloquently recounted great victories over seemingly insurmountable obstacles. Nonetheless, she maintained

But today, more than 150 years after the Emancipation Proclamation, more than 50 years after the end of “separate but equal,” when it comes to getting an education, too many of our young people just can’t be bothered.  Today, instead of walking miles every day to school, they’re sitting on couches for hours playing video games, watching TV.  Instead of dreaming of being a teacher or a lawyer or a business leader, they’re fantasizing about being a baller or a rapper.  (Applause.)  Right now, one in three African American students are dropping out of high school.  Only one in five African Americans between the ages of 25 and 29 has gotten a college degree -- one in five.

Michelle Obama was, obviously, speaking in a far different context.  But.... each was pandering to his/her immediate audience.  Ryan was being interviewed on Bill Bennett's radio program to listeners who are overwhelmingly conservative.  Obama was talking to an audience overwhelmingly black- but of students (and their parents) who had successfully run the educational gamut, bright individuals (and their dedicated parents) who had perservered and succeeded.   The young people had never been the ones "fantasizing about being a baller or a rapper"- or if they had at one time, had resisted those limitations and become something better.

Think of it a little as an individual delivering an anti-smoking message to people who always have rejected smoking- or to ex-smokers, who usually are even a little more rabidly anti-smoking.  Obama wasn't addressing a group of "ballers" or "rappers" or parents who would be likely to have much sympathy for those wasting their youth while they sacrificed a lot (not only financially) so their offspring could overcome.

Michelle Obama, like Paul Ryan was pandering, though Ryan is lucky enough to be a First Lady and thus immune from criticism.  (Occasionally, the loudmouth right has criticized Michelle Obama, but far less than they have her measured, accommodating husband, and obviously wouldn't criticize her for slamming black youth.) But she, unlike Ryan, focused her remarks on education, commenting

So when it came time for my brother and I to go to college, most of our tuition came from student loans and grants.  But my dad still had to pay a small portion of that tuition each semester, and he was always determined to pay his share right on time -- even taking out loans when he fell short, because he couldn’t bear the thought of us missing a registration deadline because his check was late...

Following the outcry over his remarks, Ryan disingenuously denied race had even crossed his mind when confronted with the charge that "urban" was a euphemism for "black."  Obama, however, faced no such dilemma, given the venue and topic of her speech.

Still, there is a disturbing and inaccurate assumption undergirding the remarks of both. Paul Ryan got cause and effect wrong, stating "We have got this tailspin of culture, in our inner cities in particular, of men not working and just generations of men not even thinking about working or learning the value and culture of work. There is a real culture problem here that has to be dealt with."  It's a "tailspin of culture" which "has to be dealt with," saith Ryan, who fails to take into account the leaching of private sector jobs by corporations and the elimination of public sector jobs by deficit-phobia politicians like himself.

Michelle Obama also appears to believe that the jobs are there, if only blacks would pull themselves up by their own bootstraps. She argued

But let’s be very clear.  Today, getting an education is as important if not more important than it was back when this university was founded.  Just look at the statistics.  (Applause.)  People who earn a bachelor’s degree or higher make nearly three times more money than high school dropouts, and they’re far less likely to be unemployed.  A recent study even found that African American women with a college degree live an average of six and a half years longer than those without.  And for men, it’s nearly 10 years longer.  So yes, people who are more educated actually live longer.

So I think we can agree, and we need to start feeling that hunger again, you know what I mean?  (Applause.)  We need to once again fight to educate ourselves and our children like our lives depend on it, because they do.

Stirring words. And higher education is necessary. But, as they once said in high school algebra, it's necessary but not sufficient.  While teaching jobs have been cut, young men and women with a bachelor's degree in the social sciences compete with a voluminous number of graduates for a limited number of jobs   And the once-highly paid graduates in the STEM field find that annually there are more than twice of them than there openings in the field.  Salaries have stagnated for more than a decade, as displayed by the graph below from the Economic Policy Institute. 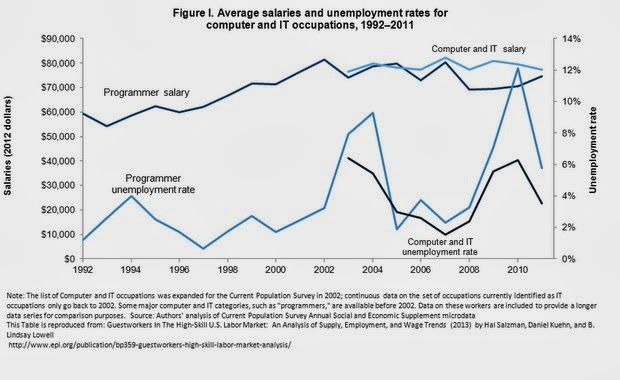 Michelle Obama dramatically emphasized the importance of education to a people oppressed by discrimination in education. Paul Ryan focused on a degenerate subculture, allowing him to excuse inaction on the employment front by the right-wing ideology he so ably espouses.  As Bill Maher implies, something is not less true if a white person says it than if a black person says it.  But it's also not less false if a black person- a First Lady- says it. A fundamental misunderstanding of the economy does not become valid simply because it comes from the First Lady of the United States.