And he's not.  But he's not above leaning on a racist for intellectual support. After Ryan was criticized for remarks he made on Bill Bennett's radio program Wednesday morning, the former Repub vice-presidential nominee pleaded (to Crew of 42, from which the picture below is taken) “It was a long talk and he asked about the culture and I just went off of that. This has nothing to do whatsoever with race. It never even occurred to me. This has nothing to do with race whatsoever,"

He figures if he says it enough, maybe even he will begin to believe it.

The Wisconsin Repub had told Bennett's audience "We have got this tailspin of culture, in our inner cities in particular, of men not working and just generations of men not even thinking about working or learning the value and the culture of work. There is a real culture problem here that has to be dealt with."

Representative Barbara Lee (D-TX) pounced, maintaining "Let's be clear, when Mr. Ryan says 'inner city,' when he says 'culture,' these are simply code words for what he really means: 'black.'"

Barbara and Paul: you're both wrong.  Ryan's comments did not have "nothing to do whatsoever with race." But he didn't mean "black;" he meant "black ghetto" or "urban black poor."

And Paul Ryan is no racist, even if he cites Charles Murray to substantiate his viewpoint.   In The Bell Curve Murray, Salon's Joan Walsh summarizes, "relied on explicitly racist (and mostly discredited) scientists to argue that blacks and Latinos lagged behind whites and Asians in wealth and income because they had lower IQs, and the basis wasn’t centuries of oppression and deprivation but genetics." It wasn't only nurture but also nature which made some minorities inferior, the stuff of which genuine racism is composed.

But that's not the end of it and (in my opinion) not the worst of it.  If we conclude, understandably, from the above that Paul Ryan excuses racism or racism we are missing the crux of the modern Repub Party, which is not racist but something equally bad.

Murray made matters worse, though far less controversially, with his follow-up book, "Losing Ground," an effort to show that he didn't look down upon poor and working-class African-Americans only because they are black.  Walsh notes

He demonstrated that in his last book, “Coming Apart: The State of White America, 1960-2010.” Murray argues that white people have developed the same character problems that claimed African Americans 50 years ago, which he outlined in “Losing Ground:” they prefer shacking up to marriage, they don’t go to church, they’re lazy and dishonest and enjoy the government dole. After all, the same percent of white children are now born to single mothers – just over 25 percent — as were black children back when Daniel Patrick Moynihan issued his alarms about “the Negro family.” And the reasons are largely the same: promiscuity, laziness, women who insist on equality – and lower IQ.

“Coming Apart” relies on the same ugly genetic fatalism and bogus notions of genetic differences Murray’s been peddling for years – this time among upper and lower income whites. In his awful book “The Bell Curve,” he relied on explicitly racist (and mostly discredited) scientists to argue that blacks and Latinos lagged behind whites and Asians in wealth and income because they had lower IQs, and the basis wasn’t centuries of oppression and deprivation but genetics. This time around Murray told his reviewers he was going to dodge the racial trap, and talk about white people. And again, he finds an IQ gap between the “cognitive elite” and lower-class whites that he says helps explain our winner take all society.

Before noting how Ryan was lucky enough to have been born into a family which enriched itself via government contracts, then paid for college by Social Security survivor benefits, and now assiduously attacks poor people while he enjoys a Lexus lifestyle on a fat government salary, she explains

But it’s worth noting that even with all the evidence that Murray is now stigmatizing a lot of white people, Paul Ryan is still using dog-whistle racist language like “inner city” to share his concern about poor people lacking “a culture of work” In denying any racism behind his remarks, he actually didn’t use the best evidence he could have mustered. He didn’t have the courage to say, “Hey, my boy Charles Murray thinks lower-income white people are lazy and shiftless, too!” But that would require insulting much of the GOP base. Ryan’s too ambitious for that.

I once foolishly believed Murray’s equal-opportunity contempt for the poor and working class might wake up those struggling white folks that he and his Republican admirers disrespect. That didn’t happen, because outside of the rarified confines of right-wing think tanks and the occasional Rick Santorum speech, they don’t talk about white people that way. The folks Murray – and Ryan – hold in contempt went big for Romney-Ryan in 2012.

The key is not to mention "black" or "white" but simply to talk of people in general.  Disdain for the poor and the working class becomes shrouded in more generalized rhetoric.  Paul Ryan though he was covering up sufficiently by referring to the "inner cities" but Representative Lee called him on it. It was not unlike when he said in January, 2013 "We don't want a dependency culture...And so our concern in this country is with the idea that more and more able-bodied people are becoming dependent upon the government than upon themselves for their livelihoods." He was referring to whites, blacks, Asians, Hispanics, everyone he believes presumptuous enough to accept the Social Security or Medicare to which they're entitled.  But he didn't mention race, so the mainstream media could portray him as bold and forthright.

As with most Republicans, Paul Ryan is not a racist.  Call it equal opportunity contempt: it's really anybody who isn't in that 53% which he and his 2012 running mate find acceptable 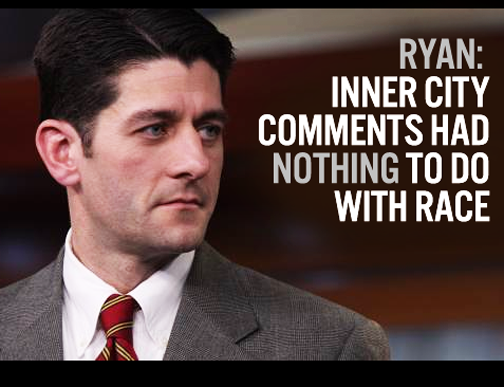