began an undercover sting operation against certain politicians in 2010, when the attorney general was a chap named Tom Corbett (perhaps you've heard of him?). An obscure lobbyist caught up on unrelated charges agreed to wear a wire and offer mid-sized bribes to state legislators and others; ultimately, according to the article, four lawmakers from Philadelphia and a judge were captured on tape accepting either cash or, in the case of the judge, a Tiffany bracelet. And yet Kane ultimately decided that lawmakers taking other people's money on tape somehow wasn't enough evidence to bring criminal charges. Kane told the newspaper in a statement that the sting operation -- which targeted black elected officials -- was racially biased and she added, somewhat incongruously. this is "nothing more than the Good Ol' Boys club playing political games."

Bunch notes that many elected officials commit indictable acts of official misconduct, that there is in fact serious,widespread racial disparities in the criminal justice system, and that poor communities in Philadelphia are being victimized by representatives more focused on their personal enrichment than in rampant crime, exploitation by payday lenders, lack of jobs, and schools neglected by political elites.

The prosecutorial discretion to which Bunch alludes (and which is perceived to have been abused in this case) extends, as he knows, beyond Pennsylvania's borders.  By golly, it even appears in New Jersey! In his wide-ranging story in The New Republic last month, Alec MacGillis told of how U.S. attorney Christie cleared his path to the governorship by protecting three powerful New Jersey Democrats, including George Norcross, then the most powerful Democrat (aside from possibly the then-Democratic governor) in the state, and now the most powerful. MacGillis writes

On numerous occasions, Norcross’s operation has come under legal scrutiny—from the Securities and Exchange Commission (SEC), state investigators, and the FBI. The cases are labyrinthine, but they all involve some dubious overlap of his many public and private interests. One case in particular threatened to get real traction. In the early 2000s, several New Jersey attorneys general investigated whether he had pressured a Palmyra councilman to fire a city solicitor, Ted Rosenberg, who wasn’t cooperating with the machine. Wiretaps offered a rare glimpse of a man completely convinced of his power. “[Rosenberg] is history and he is done, and anything I can do to crush his ass, I wanna do cause I think he’s just a, just an evil fuck,” Norcross said. In another conversation, referring to then-top Jersey Democrats, he declared, “I’m not going to tell you this to insult you, but in the end, the McGreeveys, the Corzines, they’re all going to be with me. Not because they like me, but because they have no choice.” While discussing plans to remove a rival, he exclaimed: “Make him a fucking judge, and get rid of him!”

In February 2003, Norcross met Christie for a steak dinner at Panico’s in New Brunswick. It was, to put it mildly, highly unorthodox for a U.S. attorney to sit down with a political boss who was the subject of state and SEC attention. But Christie brushed off the criticisms. “I’m very careful with who I would go out with,” he said. “If I’m looking at somebody, I’d try to stay away from them.”

That, to the skeptics, was just the issue. His corruption squad was scrutinizing dozens of lower-profile figures, all the way down to an Asbury Park councilman charged for getting his driveway paved for free. Why wasn’the looking at Norcross? And didn’t he realize that he might have to in future? Sure enough, the following year the state attorney general referred the Palmyra case to Christie’s office.

Two years later, Christie issued a scathing six-page letter announcing that he would not bring any charges against Norcross. It was a remarkable document. Not only did Christie openly declare a controversial figure to be home free, but he accused the state prosecutors of bungling the case so badly that they may have been shielding Norcross. “The allegation of some bad motive on the part of the state prosecutors is very unusual,” says Andrew Lourie, a former chief of the Public Integrity Section of the Department of Justice.

High-ranking legal sources in the state view the letter as the ultimate Machiavellian maneuver. They agree that there may not have been a strong case to bring against Norcross in the Palmyra case after so much time had lapsed. But by publicly accusing his state counterparts of protecting Norcross, Christie was inoculating himself against accusations of favoritism. One of the former attorneys general who’d handled the case, John Farmer, who went on to become senior counsel to the 9/11 Commission and is now dean of Rutgers Law School, told me: “The statements and insinuations contained in that letter were, as I said at the time, utter nonsense. The passage of time has only magnified their essential absurdity.”

Norcross may have been the most formidable player to escape Christie’s net, but he wasn’t the only one. Another was Brian Stack, a state legislator and Union City mayor who exemplifies a Jersey tradition Christie had long railed against: holding paid elected office at both the state and local levels. Stack maintains his constituents’ loyalty with acts of largesse such as doling out 15,000 free turkeys at Thanksgiving. He is rewarded with Soviet-style vote totals. (His slate won 92 percent in 2010.) In 2007, Christie conducted a massive investigation into legislative earmarks. It found that Stack had secured $200,000 in state grants that benefited a day-care center run by his then-wife. Charges were brought against other legislators for directing money to entities in which they held a personal interest, but not Stack.

There was also Joe DiVincenzo Jr., lumbering and gregarious, the protégé of legendary Newark community leader Steve Adubato Sr. In 2002, “Joe D.” ran to replace Treffinger as executive of Essex County, the largest source of Democratic votes in the state. Rumors raged that he, too, was under investigation, for conflicts between his freeholder duties and his job (one of four he held at the time) at a produce company with a county contract. Then, right in the heat of the primary, Christie released a statement denying that Joe D. was under investigation. “It was totally unprecedented. I’ve never seen that done by a sitting U.S. attorney,” said DiVincenzo’s opponent, now-Assemblyman Tom Giblin. “Trying to get a letter out of the U.S. attorney’s office is usually like pulling a wisdom tooth.” After Joe D. took office, he invited Christie to give county workers a symposium on ethics.

Finally, there was Glenn Paulsen of Burlington County, who had become the most powerful Republican power broker in the state in part because of his symbiotic détente with Norcross. Norcross got a lot of business for his insurance firm in Burlington County, while Paulsen’s law firm got plenty of municipal work in Norcross territory. In 2006, Christie’s office secured a guilty plea from a Republican operative, Robert Stears, for hugely overbilling several million dollars of lobbying work for the Burlington County Bridge Commission. According to one person with knowledge of the matter, it seemed likely that more revelations would follow and that an investigation of the commission’s spending could draw in Paulsen, and perhaps even Norcross. Stears, according to Christie’s announcement, was cooperating with an “ongoing criminal investigation.” In court, he explained that he had been “sucked into a corrupt group of people” and that he had been directed how much to bill the commission and how much to donate to the county Republican Party, which had been led by Paulsen. “Everyone was waiting for the second shoe to drop,” David Von Savage, the former GOP chairman in Cape May County, told me. It never did. “Chris essentially dumped that investigation—he absolutely dumped it,” says one lawyer, who asked to remain anonymous for fear of retribution. “As a favor to these guys, he tanked the investigation completely.”

By taking down some of the state’s bosses while leaving others off-limits, Christie had effectively turned the supposedly apolitical role of prosecutor into that of kingmaker. It was a brilliant strategy. New Jersey offered such a target-rich environment that Christie was able to get credit for taking down a slew of crooked officials and build alliances with some of the most powerful bosses in the state at the same time.

Before the scandal over closure of lanes to the George Washington Bridge, voters were told by the national media only of how the New Jersey governor worked across the aisle, creating an image of a politician who treated Democrats and Republicans alike in sharp contrast to the rancor of Washington. The myth grew of a statesman interested only in effective governance, not amassing political power at the expense of everyone but himself. In the southern part of the state, where George Norcross first became dominant and where he is the biggest pol of them all (governor arguably included), coverage of the prosecutor-turned-governor who protected him is hardly revealing. The media company which includes The Philadelphia Inquirer, the fiftteenth most circulated newspaper in the USA and most widely read newspaper  in the region, is owned by three men, with majority ownership in the hands of... George Norcross.

In an op-ed in the Inquirer today, Kathleen Kane (photo below) maintains that virtually all of the recordings essential to the prosecution took place 18 months after she took office, time-tested law enforcement tactics were skipped, two people have reported that the investigation intentionally focused on minorities, and all charges against the informant were dropped without agreement upon his testimony.  But by exercising prosecutorial discretion (appropriately or not), Kane's political career is destroyed. Not so with the governor of New Jersey, who knew that the path to political success lay in intimidating Democrats, charming the media, and especially, coddling the powerful. 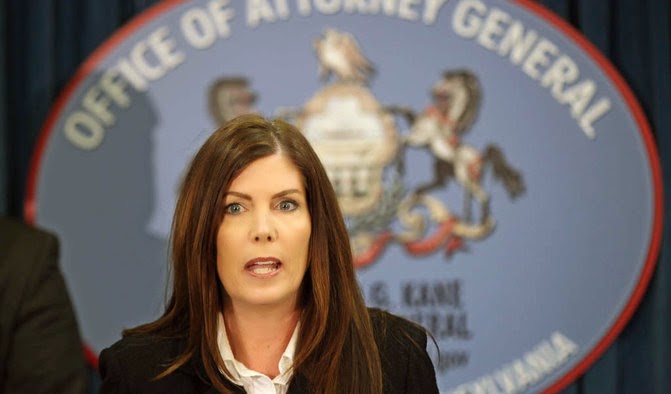