The Weekly Standard editor Bill Kristol fired back at liberal comic Bill Maher for saying the tea party was about President Barack Obama being black, calling the claim “total bulls—-.”

Maher began by slamming the tea party for condemning the bailouts during his HBO program “Real Time with Bill Maher” on Friday.

However, Kristol disagreed saying the bailouts happened in 2008 under the Bush administration and before the tea party, which he said was founded for different reasons.

Maher interjected, “It was about a black president. But let’s—”

“That’s bulls—-! That is total bulls—-!” Kristol said. “You think tens of millions of people, just out there, they just—-even you don’t believe that. You’re just saying that.”

“I totally believe that,” Maher responded. “It happened a month after he took office. Suddenly white people were very upset about debt, even though [former President George W.] Bush had raised the debt way more than Obama had.”

Kristol argued that the tea party was upset with Bush as well and they were “rebelling against the Republican establishment as well as the Democratic establishment.”

“I don’t remember a tea party then,” Maher said, adding that members of the group were “suddenly” at town halls.

Jumping in, CNN political contributor Margaret Hoover said that the movement did start under Bush for fiscal reasons.

“Republicans had been trying to get people … revved up to think fiscal issues were sexy for a really long time and finally they codified behind this mass movement to really rein in federal spending. That was a good thing,” she said.

However, Hoover added “it got of the rails a little bit after 2010” and noted that Rep. Paul Ryan (R-Wis.), chairman of the House Budget Committee, was “nowhere near them.”

Maher pointed out that on one tea party website, they were not talking about debt, but rather impeaching Obama, Benghazi and Obamacare.

“I wonder if they ever really cared about the debt that much,” Maher said.

Hoover pushed back saying the group had been “co-opted.”

“It was co-opted by more organized forces that, frankly, had less and less to do with fiscal discipline and more and more to do with … whatever their pet issue was,” Hoover said.

Of course, the tea party doesn't care about debt.  Few Republicans care about debt except when the White House is occupied by a Democrat, typically moving the nation toward a balanced budget lest Republicans complain too loudly- which they do, anyway.  Otherwise, the Real Time discussion was marked by naivete, ignorance, or incoherence.

For Maher, it was about race; for Kristol, it was bailouts, housing, health care and the stimulus; for Hoover, federal spending.

The tea party has feigned concern about federal spending (graph below from CNN Money from CBO figures). Not only is reducing government spending in a deep recession economically bizarre, but

As a share of the economy, spending on domestic and defense programs has been on the decline since 2010, and is on track to reach the lowest level in more than 50 years by 2023.

At its height in 2010, "discretionary spending" under Obama reached 9.1% of GDP. That was largely due to the stimulus law intended to dig the country out of a deep recession. But even at that high level, it wasn't that much higher than the 40-year average of 8.4% and was still below the 40-year peak of 10% reached in 1983.

Today, levels are well below the long-term average. And the Congressional Budget Office projects that by 2023 discretionary spending will fall to 5.3% of GDP, the lowest since 1962. 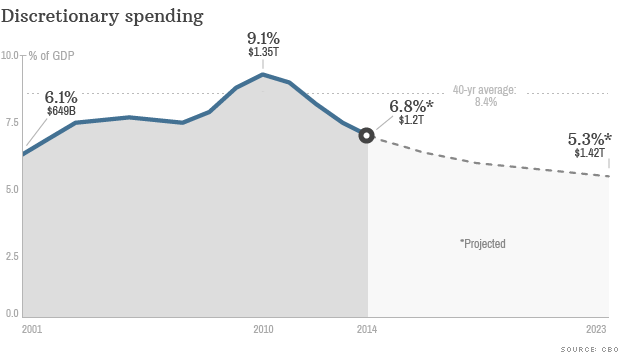 It is hard accurately to portray the tea party movement as having been co-opted, as Hoover maintains, when it began as an astroturf operation, which Kristol won't acknowledge and surprisingly, Maher doesn't recognize.   CNBC editor/reporter Rick Santelli, described by Wikipedia as "a former vice president for an institutional trading and hedge fund account for futures-related products," is credited with setting off the movement when on the floor of the Chicago mercantile exchange he ranted (video,below) about homeowners unable to pay their mortgages; a rich guy condemning the decadent middle class to a choir of rich guys.


But the assault on the middle class disguised as the "tea party" began much earlier. Blogging at The Huffington Post in October, investigative historian Eric Zuesse explained

Amanda Fallin, Rachel Grana, and Stanton A. Glantz, published on 8 February 2013 in the online edition of the journal Tobacco Control, their blockbuster study,"'To quarterback behind the scenes, third-party efforts': the tobacco industry and the Tea Party," and they laid out there the history of the key alliance between the tobacco companies and the Koch brothers. This enormous study, through thousands of pages of archives, was funded by the National Cancer Institute; and it reported that, "Rather than being a purely grassroots movement that spontaneously developed in 2009, the Tea Party has developed over time, in part through decades of work by the tobacco industry and other corporate interests. ... Simultaneously, they funded and worked through third-party groups, such as Citizens for a Sound Economy, the predecessor of AFP [Americans For Prosperity] and FreedomWorks," all of which were/are Koch operations.

These researchers reported that, "In 2002, ... CSE started its US Tea Party (http://www.usteaparty.com) project, the website of which stated 'our US Tea Party is a national event, hosted continuously online and open to all Americans who feel our taxes are too high and the tax code is too complicated.'" (Amazingly, that damning webpage can still be accessed, via the web's archive authority.) Already, "Between 1991 and 2002 the tobacco companies, mainly Philip Morris, provided CSE with at least US$5.3 million," and Philip Morris's V.P. for Government Affairs justified these expenditures in a memo by saying: "They are adding this level of value. They have provided significant grassroots assistance, in the nature of several thousand calls to the Hill," and are "very active on our behalf in the field in key states with key Members" of Congress. So: when the "spontaneous" "Tea Party" organization rose up in February 2009, to protest Obamacare, it was actually neither spontaneous, nor at all new.

There are racially bigoted undertones and overtones among tea party adherents, as Maher emphasizes.  But those are mere rank-and-file supporters, manipulated by a corporatist movement uninterested in anything but promulgating its own wealth and power.