Bill Clinton Was Raised In Hope. So Were Others.

Mike Huckabee questioned President Obama’s support for marriage equality during an appearance on Fox News on Friday, suggesting that Obama was not genuine in his belief that gay and lesbian couples should be allowed to marry.

Describing his own opposition to equal marriage rights, Huckabee explained, “The position that I hold is the position that Barack Obama, Hillary Clinton and Joe Biden held in 2008. Barack Obama held it until 2012.” “And my question that I would love to pose to the president is this: Mr. President, please explain that when you said in 2008 at the Saddleback Church forum that you stood for traditional marriage and you did so because you were a Christian and because it’s what the Bible taught, please answer: Were you lying then, are you lying now, or did the Bible get rewritten?”

Volsky had begun by assuming "Mike Huckabee questioned President Obama's support for marriage equality during an appearance on Fox News on Friday, suggesting that Obama was not genuine in his belief that gay and lesbian couples should be allowed to marry."

You might think: one must be right and the other wrong. But, no, both are wrong. Surely, the former Arkansas governor realizes- as did most of America, even at that time- that Barack Obama supported gay marriage. Rather, Huckabee is asking- rhetorically, but still hoping for a response: "Did the Bible get rewritten?"  He posed a question he knew Barack Obama could not respond to because "no, the Bible did not get rewritten" would sound almost as silly as "yes, the Bible did get rewritten."  Additionally, it is not wise to get into a debate about Scripture with an ordained Protestant (in this case, Southern Baptist Convention) minister. Politically, especially, the odds are not good playing on someone else's turf.

But don't blame Obama (though I generally like to). Huckabee's (false) challenge is based on a faulty premise.  Immediately below, the transcript of the relevant portion of the interview of Senator Obama by Reverend Rick Warren during campaign 2008:

WARREN: There's a lot more I'd like to ask on that. We have 15 other questions here. Define marriage.

WARREN: Would you support a Constitutional Amendment with that definition?

OBAMA: Because historically -- because historically, we have not defined marriage in our constitution. It's been a matter of state law. That has been our tradition. I mean, let's break it down. The reason that people think there needs to be a constitutional amendment, some people believe, is because of the concern that -- about same-sex marriage. I am not somebody who promotes same-sex marriage, but I do believe in civil unions. I do believe that we should not -- that for gay partners to want to visit each other in the hospital for the state to say, you know what, that's all right, I don't think in any way inhibits my core beliefs about what marriage are. I think my faith is strong enough and my marriage is strong enough that I can afford those civil rights to others, even if I have a different perspective or different view.

Admittedly, Obama did say "I think my faith is strong enough and my marriage is strong enough that I can afford those civil rights to others, even if I have a different perspective or different view," which has the advantage of being incomprehensible.  If his "faith is strong enough" to believe "civil rights" should be extended to others, does that mean that that he believes those rights are contrary to his faith?   And in contrast to what does he "have a different perspective or different view?"  If anyone but a politician said something so obviously ambiguous, you would say "Huh?"

Huckabee was, though, probably referring to the statement in which Obama confirms he believes "marriage is the union between a man and a woman."   But the candidate immediately followed that with "Now, for me as a Christian- for me- for me as a Christian, it is also a sacred union."     As Huckabee pretends not to notice, Obama here is saying merely that marriage is "a sacred union," in recognition that no one in American politics ever lost a vote by proclaiming marriage as a "sacred union," even among those who are on their third or fourth. (It additionally allowed him to "evolve" into supporting same-sex marriage, which now becomes among the sacred unions.)  And give him extra points for mentioning God, always helpful with the electorate, even if he added "is in the mix" in a somewhat patronizing reference which evidently went over the heads of the right.

But Mike Huckabee knew that Barack Obama could not safely answer his rhetorical question, which was akin to throwing a Hail Mary pass at the end of the first half. It wasn't likely to succeed, but could not backfire, and meanwhile he continues to ingratiate himself with the Obama-hating wing of the Repub Party.... which is almost everyone.

"Mama didn't raise no fools," the old saw goes. In the case of Mae Huckabee, who raised Mike in Hope, Arkansas, the saying applies.  Her son (photo from faxpix.net) says he won't decide until after the midterms whether he'll make another bid for the GOP presidential nomination.  Notwithstanding conventional wisdom, Democratic front-runner Hillary Clinton would do much better to hope she's facing Jeb Bush than Mike Huckabee down the road. 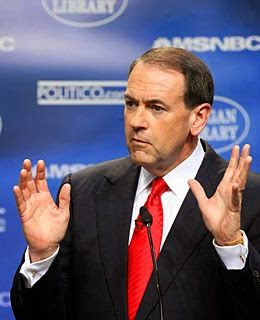