That'll Teach Them. Next Time They Try To Get Women And Children Shot, They Won't Demean Blacks.


That doesn't do much for one's image as he camps out on federal land refusing to pay the $1million in grazing fees he has racked up over the past couple of decades. Even GOP TV's Sean Hannity, Bundy's most ardent supporter in the media, deserted him, stating

I don't even want to hear it anymore. It's obnoxious, ignorant. It reminds me of Todd Akin.

That's a start. But it's only a start. And more will not be coming. Hullabaloo's David Atkins recognizes "the arguments being used by Bundy and friends were authentic in polite society."  He adds

1. Poor people are poor because they're lazy.

2. Minorities tend to be poor, therefore they must be lazy.

4. Minorities stay poor because of government assistance, but vote for more government.

The first four elements of that syllogism are standard Republican rhetoric. Bundy's only sin was adding point #5, that therefore minorities are slaves of government, and might be better off as harder-working slaves.

All of this is disgusting rhetoric, of course. But it's only disgusting in part because of the racial element. Adding point #2 of the syllogism simply bakes in another layer of prejudice to the cake.

The fact is that people are not poor because they're lazy. Most people living paycheck to paycheck work full-time in one or more jobs. A great many others are underemployed. And we know that productivity has been skyrocketing even as wages stagnate. This is not a country that rewards hard work:

But we don't need racial context for that conversation. It's almost as offensive to say that poor people of any color are made lazy by government assistance as to say that individuals of a specific skin color are. After all, the former statement expresses an equally awful and policy-distorting prejudice that affects an even larger number of people.

Every statement in the Bundy/Ryan syllogism is vile and deserves public repudiation. It's about time Democratic politicians stood up in outrage over Republican objectivism as much as they do over Republican racism. 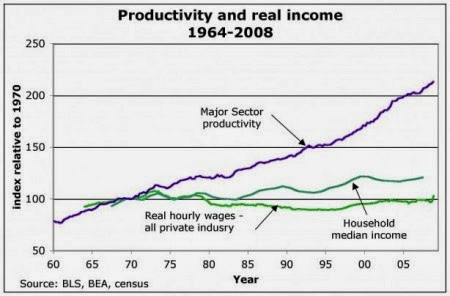 If the conservative argument is noxious with or without overt racial bigotry- and it is- the position of Bundy and his supporters with or without his recent statement is noxious.  ""We were actually strategizing to put all the women up at the front.," former Arizona sheriff Richard Mack boasted.  "If they are going to start shooting, it's going to be women that are going to be televised all across the world getting shot by these rogue federal officers." Understandably intimidated by the collection of AR 15 and AR 17 rifles pointed their way, federal law enforcement officers backed off (photo below from Las Vegas Review-Journal/Ap via Newsweek). The Black Panthers would have been proud, although they didn't hide behind women and children. 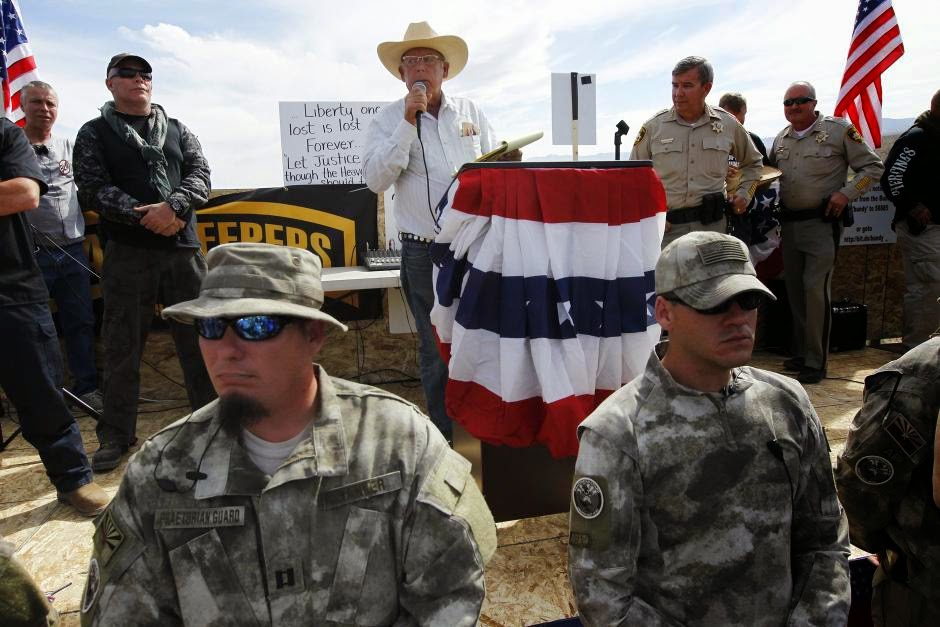 It was only the blatantly prejudicial crack by Bundy which dampened enthusiasm for the conservative hero. As Hannity apparently understands, it threatens to derail GOP dreams of the Senate majority the Party expected before Todd Akin opened his big mouth in 2012. So in a paraphrase of one of Bill Maher's stand-up lines from Friday night's "Real Time"::  Cliven Bundy no longer is a hero to many Republicans. Now he's the leading contender for the Republican presidential nomination.