But On A Positive Note, Sally Quinn Feels Warm All Over


God may exist. And he may have a Son, pre-existent, sinless, at one with humanity because of his mortality and also able to save sinners (constituting everyone) by his grace.

Or not. No one who is alive is able to say with certainty whether the gospel message is accurate, though contrasting views are inevitable and legitimate (though not all can be valid).

But one thing is certain.  The following view, expressed by Washington Post lifer Sally Quinn, is inaccurate, illegitimate, and worse.  In her column "On Faith," she says

Do the participants at the Seder really believe that the Jews were enslaved in Egypt, were passed over by God, and escaped to their own land? A lot of them don’t.

It really doesn’t matter whether the Jews at the Seder believe. Nor does it matter that the Christians at Easter believe. What matters is the overwhelming sense of community that all of these rituals inspire.

Uh, yes it does. It does "matter" what Christians, Jews, and for that matter Muslims, believe.What does not matter as much is the "sense of community," which anyone may or may not have, which can come in various iterations, and which is ill-defined and even abstract.  Your first clue: it's a "sense" of community.

In a variation of "out of the mouth of babes," Digby, most assuredly not a Bible-believing Christian, brilliantly remarked of the above-noted quote

That's nice. I like togetherness and a sense of community too. But I just have a sneaking suspicion that an awful lot of the people who are celebrating Passover and Easter actually do believe in their religion and it does matter to them. In fact, a bunch of them might just find it a teensy bit presumptuous of Sally Quinn to dismiss their beliefs on one of the most important religious days of the year in favor of some bourgeois Sunday brunch celebration where everybody feels good about themselves.

But hey, who am I to venture an opinion? I'm not religious. But then apparently neither is Sally Quinn who writes a column in a newspaper called "On Faith."

Why does Sally Quinn write a column in the newspaper called "On Faith" anyway?

Whether Jesus Christ was just some guy 2,000 years ago or something other than a crackpot can be debated. But if he was not as Christians believe, then surely Paul was right: if He was not raised, their faith is futile and this "sense of community" is false. If instead he was as Christians are called upon to believe, then Easter is far more than the quaint little holiday with charming Easter eggs and the bountiful ham Quinn perceives.

Quinn is an equal opportunity patronizer, writing also "I have been struggling to reconcile the pull I have between my attraction to Judaism and my sense of belonging in my church. Belief has nothing to do with it."

Yes, it does, or should.  In The Last Testament, A Memoir From God, God explains

Yea, I love it when the less observant among you claim to be "cultural Jews."

Breaking news from Mt. Sinai: Judaism is a religion.

The millions of allusions to me in every single text and commentary and ritual of the past 3,000 years probably should have been a giveaway.

And from a site called "Revealing God's Treasure" comes a map of an event which doesn't matter one way or another to Sally Quinn: 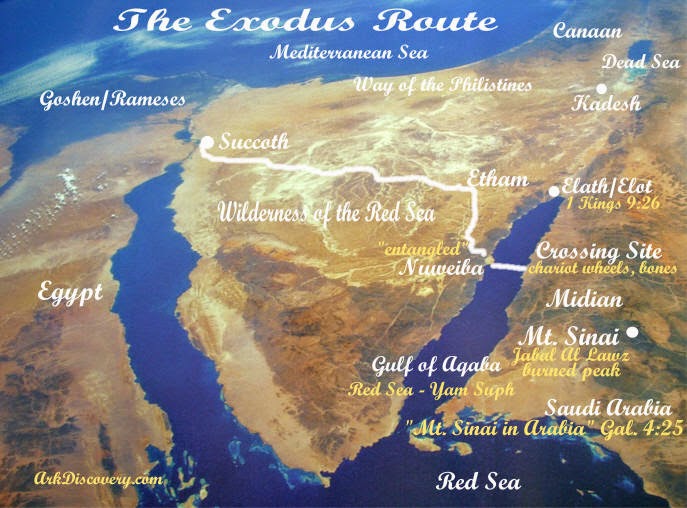