How touching, trying to relive the days of "compassionate conservativsm," the lingusitic effort of Frank Luntz, Karl Rove, and George W. Bush to refashion Republican big government, corporate-centric conservatism with a softer, gentler veeer.  Jeb Bush and Bobby Jindal will

appear in a commercial that will air Sunday to promote NewRepublican.org, a project focused on outlining a positive GOP agenda for the future.

The former Florida governor and the current Louisiana governor, both potential 2016 presidential candidates, support a super PAC that is the brainchild of Republican strategist Alex Castellanos.

“If you believe that every parent ought to be able to choose their child’s school, and that the economy should be driven from the bottom up, not the top down from Washington, then you’re thinking like a New Republican,” Bush says to the camera at the start of the 30-second spot, shared first with POLITICO.

“If you don’t think the Republican Party should be the party of big government, big business or big anything, you’re thinking like a New Republican,” adds Jindal.

Castellanos created the group last year after the party’s losses in 2012, when he felt there was too much focus on attacking Barack Obama without a clear vision for where conservatives want to take the country.

This would be no more touching, but far more believable, if we hadn't learned from The Washington Post a couple of weeks ago

Former Florida governor Jeb Bush will get top billing when he and other potential 2016 presidential candidates join billionaire casino mogul Sheldon Adelson for an exclusive Republican gathering next week in Las Vegas.

Bush, who is quietly exploring a run for the White House, will be the featured speaker at an exclusive VIP dinner on Thursday hosted by Adelson and his wife, Miriam, at his company’s private airplane hangar at Las Vegas Macarran International Airport, according to a draft itinerary obtained by The Washington Post.  The Adelsons’ dinner for Bush will kick off the Republican Jewish Coalition’s four-day spring leadership meeting, during which politicians and major GOP donors will mingle at golf and poker tournaments, as well as in political strategy sessions.

"The Las Vegas meeting," Forbes reported on Thursday, "was dubbed the "'Adelson primary' because of the billionaire’s outsized influence on Republican campaigns. Attendees included heavy hitters like New Jersey Gov. Chris Christie, Wisconsin Gov. Scott Walker, Ohio Gov. John Kasich and former Florida Gov. Jeb Bush."  Yes, that Jeb Bush, who wants you to know, as his colleague from Louisiana put it, the Republican Party should not "be the party of big government, big business or big anything,"

And Adelson's mega-fortune keeps growing, in that, according to Forbes on Wednesday

In the two days since he hosted the Republican Jewish Coalition’s meeting with several possible 2016 Republican candidates at his Venetian Resort and Hotel,  Adelson personally made $2.1 billion — 21 times the $100 million he reported giving away during the 2012 presidential election.

Adelson proves GOP propaganda that only hard, dedication, and merit stand between middle class workers and the American dream of astounding success.  In true style of the Party which opposes abortion, family planning, health care for the poor, and anything which might threaten family values

Shares of his casino company Las Vegas Sands LVS -1.68% climbed Monday and then spiked Tuesday after an overnight report showed strong first quarter gambling revenues in Macau, where Adelson has extensive operations. The 6% stock jump over two days, coupled with a dividend payout on Monday, pushed Adelson’s net worth up $2.1 billion to $40 billion, cementing his position as eighth-richest in the world by Wednesday morning.

Adelson’s fortune has jumped $36.6 billion since Forbes published its billionaires list in 2009. The explosion in wealth has allowed the gaming mogul to become a major player in American politics. His recent $2.1 billion gain demonstrates just how large his fortune is — and how little his political donations affect it.

Adelson’s shares in Las Vegas Sands are worth $36 billion on their own. But they also kick off massive cash payments. On Monday, the company doled out a quarterly dividend that put an estimated $164 million in cash into Adelson’s pocket after taxes. His total cash pile is now an estimated $4.3 billion.

George W. Bush's kid brother now has become the focus of attention of the big money boys in the GOP and not coincidentally, the mainstream media, their man crush on Chris Christie having subsided with the American people beginning to catch on to how dishonest (if not corrupt) he is.

The intense interest includes, but is not limited, to Adelson, whose opposition to Internet gambling (competition for his brick-and-mortar operations) is his current obsession, but who has fervently supported the crushing of Iran and of unions.  Below, in a cartoon by Matt Wuerker for Daily Kos, we get an idea how Jeb Bush believes "the economy should be driven from the bottom up, not the top down from Washington": 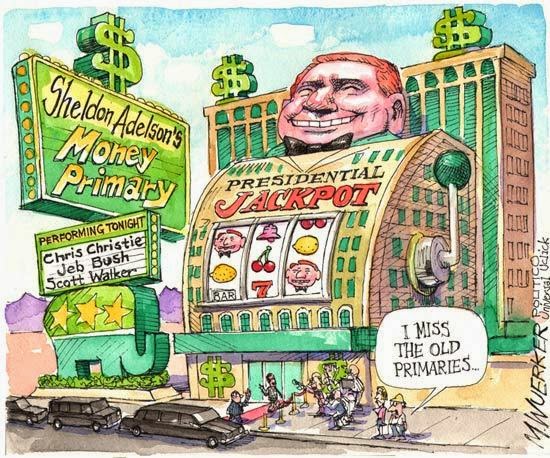