Ready For Hillary, Whomever She Is


It is the news that's not news.  Asked about presidential plans, Hillary Clinton has responded "I am obviously flattered and deeply honored to have people ask me and people encourage me. And I am thinking about it."

Flabbergasted! After collecting in 2008 17,857,501 votes in Democratic primaries (more than anyone ever) and 1,973 delegates, she is just so overwhelmed by the outpouring of support for her nearly inevitable candidacy.  That includes Correct the Record, Emily's List, Priorities USA, and super PAC Ready for Hillary.

In case the last three organizations don't do enough to roust up the needed funds, the former one-term Senator is taking no chances. In October, National Review reported that she had recently given two separate speeches at Goldman Sachs and appeared at an event at the Builders and Innovators Summit, where she hung out with Goldman CEO Lloyd Blankfein.    In September and July, she had paid a visit to investment firms Carlyle and KKR, respectively. Though they were lucrative gigs, Clinton was only too pleased to shore up her relationship with the financial community.

She was able to do so with little concern about, and little regard for, her left flank, which is hankering for Hillary, just as much of it was hankering for great progressive hope Barack Obama in 2008. We know how that turned out- in expansion of the national security state, a quest to lower Social Security and Medicare, an emphasis on budget-cutting in the face of a sluggish economy, and other areas, including health care reform without even a public option.  (The White House is ecstatic over 7 million signed up for the exchanges- plus 3 million more from expanded Medicare with reform prompted by reports of 40 million uninsured Americans.)

A a recent educational conference in Irving, Texas at which Jeb Bush and Hillary Clinton (photos of each, below, from CNN Political Ticker) spoke, the former Secretary of State in her keynote address "praised Bush's dedication to education reform since serving two terms as governor of Florida, where he overhauled the state's education system, introducing a school voucher program and banning using race as a factor in university admissions."

A little over a year ago, though, the Palm Beach Post had editorialized

Mr. Bush heads several foundations pushing for a rapid expansion of charter schools and virtual schools. His Foundation for Excellence in Education accepts donations from private companies that would profit from lax new laws that Florida and other states are rushing to enact. The sort of careless “reform” Jeb Bush advocates will end up with taxpayers fleeced and students and parents cheated. He has a reputation for reform. He has a record of making messes

Bush's drive for school vouchers is joined by a prominent venture capitalist, the Florida Chamber of Commerce, Americans for Prosperity, and influential conservative think tanks. Concerned only with the children, no doubt.

Charles Pierce remarks "Why any Democratic politician would share a stage with a guy who cracks public school teachers over the head while falling for every 'reform' scam- from unregulated charter schools to online diploma mills- is beyond me." But it really isn't.  Jeb Bush and Hillary Clinton appear to have something (besides personal friendship) in common- a dedication to crony capitalism, in which private interest, so helpful to their own career, conveniently outweighs he public interest. The real question is why so much of the Democratic base is eager to embrace someone with ideas inimical to Democratic values and ideals. 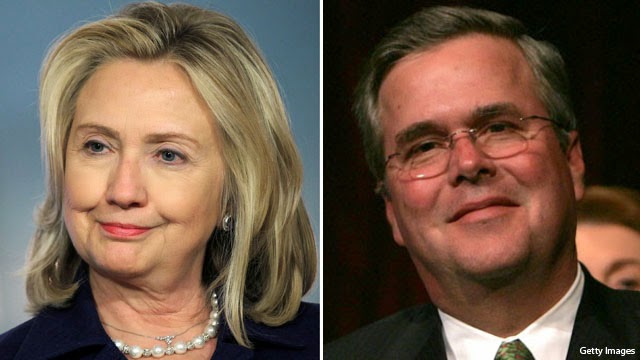