When  "Rush Revere and the Brave Pilgrims: Time-Travel Adventures With Exceptional Americans” was called "basically historical fanfiction that Rush Limbaugh has written about himself," Washington Post columnist Alexandra Petri probably could not have imagined the talk-show host would garner the Author of the Year award of the Children's Book Council.

But it has happened, as Salon's Prachi Gupta explains:

The children of America have spoken, and they want more Rush Limbaugh (before continuing, please take a moment of silence for America’s future). On Wednesday night, the conservative radio commentator and “quivering rage heap,” as Jon Stewart has called him, accepted the “Author of the Year” award at the 7th annual Children’s and Teen Choice Book Awards charity gala in New York.

“Rush Revere and the Brave Pilgrims: Time-Travel Adventures With Exceptional Americans,” which has been on the New York Times bestseller list for nearly 30 weeks now, is about a substitute teacher with superpowers — conveniently named “Rush Revere” — and his time-traveling horse. It’s, as the Washington Post called it, basically “historical fanfiction about himself.” The two travel back in time to visit the Pilgrims, sharing what Limbaugh has called “the true story of Thanksgiving.” It’s gotten mixed reviews from critics, though the worst (and therefore, best) calls it “God-awful … really, breathtakingly, laughably terrible.”

When it was announced that Limbaugh’s book was listed among the “Author of the Year Award” finalists in March, the Children’s Book Council felt compelled to remind the public that the books in the category “are determined solely based on titles’ performances on the bestseller lists,” and the rest is left to a vote by children. Ultimately, though, Limbaugh’s book beat out Veronica Roth’s “Allegiant,” Rachel Renee Russell’s, “Dork Diaries 6: Tales From a Not-So-Happy Heartbreaker,” Rick Riordan’s, “The House of Hades,” and Jeff Kinney’s “Diary of a Wimpy Kid: Hard Luck.”

“This is unexpected,” said Limbaugh at the podium when accepting the award (at the 59:20 mark in this video). “But it’s a thrill.”

“I love America. I wish everybody did. I hope everybody will. It’s one of the most fascinating stories in human history,” Limbaugh continued. “It’s a delight and it’s an opportunity to try to share that story with young people so they can grow and learn to love and appreciate the country in which they’re growing up and will someday run and lead and inherit.”

Yes, he loves America. And here is how he loved it, four days before inauguration of the 44th President:

If I wanted Obama to succeed, I'd be happy the Republicans have laid down. And I would be encouraging Republicans to lay down and support him...

Were the liberals out there hoping Bush succeeded or were they out there trying to destroy him before he was even inaugurated? Why do we have to play the game by their rules? Why do we have to accept the premise here that because of the historical nature of his presidency, that we want him to succeed? This is affirmative action, if we do that. We want to promote failure, we want to promote incompetence, we want to stand by and not object to what he's doing simply because of the color of his skin?

And here is how, five days later and one day after the inauguration, he loved his country when buddy Sean Hannity threw him a life preserver:

Why would I want that to succeed? I don't believe in that. I know that's not how this country is going to be great in the future, it's not what made this country great.

So I shamelessly say, no, I want him to fail, if his agenda is a far- left collectivism, some people say socialism, as a conservative heartfelt, deeply, why would I want socialism to succeed?

The Children's Book Council has its rules, and they cannot change them in the midst of discovering a hyper-partisan extremist is about to win one of their awards.   Still, self-examination is in order when an organization finds itself honoring, and arguably presenting as a role model to children, a $50 million a year man who so humbly (his humble abode, below) declared on the first of those occasions "I'm happy to be the last man standing. I'm honored to be the last man standing. Yeah, I'm the true maverick." 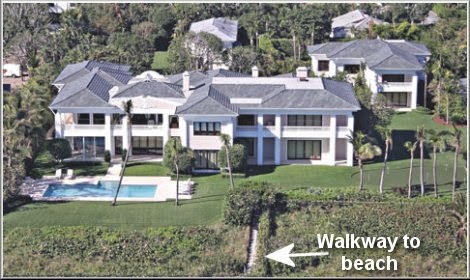