Hail To The Chief

Let's skip all the corruption-inducing money-raising from the Big Money Boyz (formerly known as "fat cats"), the seemingly endless speeches and debates, the choreographed political convention and, most of all, imposing upon voters in a democratic society the privilege of voting for their top leader.

Let's go right to the inauguration of Hillary Rodham Clinton as the 44th President of the United States.

Mrs. Clinton's nomination was heavily favored in 2008 but as Politico's Maggie Haberman reports, former Ohio governor (and Clinton acolyte Ted Strickland) maintains "Secretary Clinton's inevitability, or what appears to be inevitability, is something that is happening (on its own). So what to do about it? You accept it for what it is- a grass-roots movement. I don't know that there's a lesson to be learned from what happened several years ago.  The circumstances were very different then.

Acolyte is a little strong, but few descriptions of Ed Rendell are unfair.  The former Pennsylvania governor, critic of Social Security/Medicare, private-equity apologist, and fracking advocate contends "the rank-and-file Democrats, the political Democrats, the donor Democrats.... are of the strong belief that only Hillary can pull this (victory over the Repub nominee) off“.. People come up to me on the street and say 'How can I write a check to Hillary?' I've never seen anything like it, including in my own" campaigns."  And veteran Democratic strategist Tad Devine contends "I don't think... this tak of inevitability is a negative to her. I think it's more of an asset than a liability. She is stronger than any challenger has ever been. She has the strength of an incumbent president seeking reelection. That's her position... I don't see some anti-Hillary movement rising up in the Democratic Party. She's not a polarizing figure within the Democratic Party."

Agreed: in all likelihood, Hillary Clinton will run for the Democratic presidential nomination; if she does, she'll probably be successful; and if nominated, she'll probably defeat her opponent.

But one of Mrs. Clinton's assets could, and with a diligent media likely would, prove to be an obstacle to either her nomination or her election. Devine reportedly "added that Clinton has been helped in part by being a team player with Obama and in part because her husband's poll numbers are now so high."

The Bill factor.  William Jefferson Clinton (initially) helped his wife attain political credibility.   But now that she has built upon that foundation by being a United States Senator and Defense Secretary (and accrued a tremendous following on the way), President Clinton's record is fair game.  And his statements and actions will be so for the GOP in a general election, and they should be for Democrats during the nominating process.   One of the former has helped, in its small way, with a movement gaining traction in Repub states, especially now that, as CBS News explained

Louisiana is the fifth state to adopt a law that requires abortion doctors to have admitting privileges at a nearby hospital.

Louisiana's house passed the bill by a vote of 88 to 5.

"It ensures that physicians that do abortions in Louisiana do so in a safe manner and they are also held to the same standards as any other physician doing surgeries in this state," said Jackson.

Dr. Radha Raman does not perform abortions, but she worries because the bill could force at least three of the five abortion facilities in Louisiana to close.

"The thing is, you're decreasing the access to care by a big percentage," she said.

But then, as they say: that's a feature (actually, asset) rather than a bug.

Often, doctors in abortion clinics do not have local admitting privileges because they travel from town to town to do the procedure.

Raman expects her patients in New Orleans may have to drive 300 miles away to Shreveport for abortion services.

"They're going to be overwhelmed over there, they could be booked out for months," said Raman.

Louisiana's bill is modeled after laws in Texas, Alabama, Mississippi, and Wisconsin.

Louisiana would make five (as the accompanying map indicates), once Governor Jindal signs the bill. 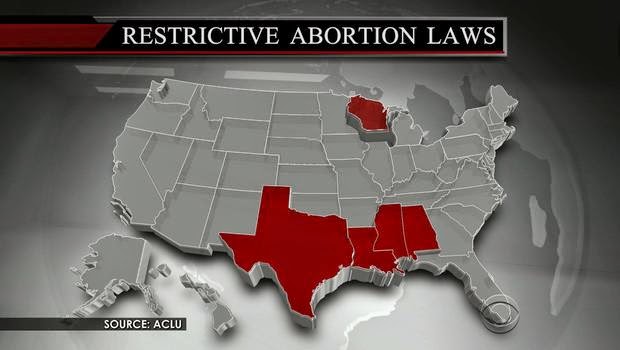 But now there are six.   According to Tulsa World, the Oklahoma state senate has approved a bill which "would require abortion clinics to have on site during the procedure a doctor with admitting privileges at a hospital within 30 miles of the facility." The bill now goes back to the House, which likely will approve it and send it to Repub Governor Mary Fallin, who would sign it.

Do you want a beachfront property in Arizona ?  You'd have to compete for its purchase with Louisiana's Jackson (photo of the genius, from Tulsa World, below), who claims the legislation she sponsored "ensures that physicians that do abortions in Louisiana do so in a safe manner and they are also held to the same standards as any other physician doing surgeries in this state." She apparently doesn't understand an admitting privilege.

is the right of a doctor, by virtue of membership as a hospital’s medical staff, to admit patients to a particular hospital or medical center for providing specific diagnostic or therapeutic services to such patient in that hospital. Each hospital maintains a list of health care providers who have admitting privileges in that hospital.

Citing the definition, a Daily Kos blogger last November- in the midst of controversy over legislation in Texas- typed

when there’s an emergency, admitting privileges become irrelevant. Under a1986 federal law known as EMTALA, hospitals are required to provide care to anyone who needs emergency care [with or without insurance, by the way.] This requirement includes pregnant women who need a life-saving abortion, are in labor, or are suffering the effects of a botched abortion. [Sadly, in 2011, a bill was passed in the U.S. House of Representatives that would have allowed hospitals to turn away patients arriving in the ER in need of a life-saving abortion or other medical help related to abortions. Fortunately, that bill went nowhere, but the fact that it was introduced at all is very disturbing. Opponents of that inhumane notion called it the “Let Them Die” bill.]

Think of it this way: If you’re walking down the street and have a heart attack, it doesn’t matter who your personal doctor is, or whether he/she has admitting privileges at a hospital within 30 miles of where you are: You can be taken to any hospital emergency room, get admitted, and receive treatment, even if your doctor isn’t there, and even if you don’t know a doctor within 30 miles of the hospital.

Also, if a woman is at home and experiences a pregnancy-related emergency, emergency responders will transport her to the closest hospital, regardless of where her doctor has “admitting privileges,” and—again, under federal law–she’ll be cared for there, no admitting-privileges questions asked.

It’s also important to realize that the notion of admitting privileges does not jibe with contemporary norms in inpatient hospital care. Today, many hospitals employ staff physicians to provide inpatient care, and whether an abortion provider has admitting privileges at a particular hospital plays little or no role in determining which hospital may be best suited to care for the patient.

As the Oklahoma bill was considered by the state senate, the executive director of the American Civil Liberties Union of Oklahoma told RH Reality Check that admitting privileges laws "are nothing more than smokescreens to their real intent of restricting access to reproductive health-care services."   However, they are the third leg of Bill Clinton's prescription- "safe, legal, and rare"- for abortion.  If anyone is paying attention, the inevitable President Clinton 45 will not be able to avoid confronting whether this is a positive legacy of her husband's presidency.

As is widely known now Sen. Kyrsten Sinema (D-Ariz.) faced criticism Friday afternoon for the way in which she chose to vote against a p...