Go Ahead. Talk About Race. I Dare You.


Michelle Obama supports Donald Sterling. She hasn't said so, of course, and probably has little more than contempt for him because of what he believes, though as an Obama, she probably admires him for the obscene wealth he has been able to accumulate.

At the height of the controversy over Sterling's thoughts, Brayden Goyette of The Huffington Post noted the Los Angeles Clippers' owner had been sued twice, in 2003 and in 2006, for housing discrimination and

The first suit, brought by 19 tenants with the help of the nonprofit Housing Rights Center, accused Sterling of forcing blacks and Latinos out of his rental properties, and ended in a confidential settlement in 2005. The second accused him of refusing to rent to African-Americans in Beverly Hills and to non-Koreans in LA's Koreatown. It ended in a record $2.725 million payout to the Justice Department. Sterling denied wrongdoing in both cases.

Most people were not aware of Sterling's apparent history of racial discrimination and even fewer cared, at least among the monied interests which control the NBA and the mainstream media. Sterling was spared appropriate opprobrium in the court of public opinion because he had acted nefariously, rather than engaging in offensive speech, which would have raised more eyebrows.

Sterling instead has been banned from the National Basketball Association, which appears not to have cared a whit that the owner of one of its teams profited handsomely from illegally restricting the housing choices of blacks whom, you may have heard, constitute a substantial portion of the players in the NBA.  Instead, he has been punished and ostracized for what would more fittingly be termed thoughts, rather than behavior or even speech. Sterling's conversation with his girlfriend was conducted in private, not for attribution, and thus did not even rise to the level of the storied speech in the public square, constitutionally protected from government regulation.

That should have brought him support from the First Lady (photo below from Politico), who marked the 60th anniversary of Brown v. Board of Education by telling high school seniors in Topeka "This issue is so sensitive, it’s so complicated, so bound up with a painful history. No matter what you do, the point is to never be afraid to talk about these issues, particularly the issue of race, because even today, we still struggle to do that."

Inadvertently, Donald Sterling talked of race, and it is proving to have been a very, very costly mistake.   Mrs. Obama really didn't mean there should be an honest, if uncomfortable, discussion of race, given that it was a mere prelude to the more sincere "We know that today in America, too many folks are still stopped on the street because of the color of their skin, or they’re made to feel unwelcome because of where they come from, or they’re bullied because of who they love."  Advocacy of illegal immigration and of same-sex marriage, as well as opposition to racial profiling are issues supported by the Democratic establishment, ones conveniently dovetailing with causes the donor base is comfortable with.

No surprise there, coming from the creator of the "Let's Move" campaign, in which the First Lady boldly came out in favor of exercise while fooling some of us into thinking she was deeply concerned about diet and nutrition. Following publication of  "Fat Chance: The Bitter Truth About Sugar" by pediatric endocrinologist Robert Lustig," The Guardian in March 2013 reported Lustig explaining

Michelle Obama appeared to be onside when she launched her Let's Move initiative in February 2010 with a speech to the Grocery Manufacturers Association of America. "She took it straight to them and said, 'You're the problem. You're the solution.' She hasn't said it since. Now it's all about exercise.

"Far be it from me to bad-mouth somebody who wants to do the right thing. But I'm telling you right now she's been muzzled. No question of it." In his book he tells of a private conversation with the White House chef, who he claims told him the administration agreed with him but did not want a fight with the food industry.

So Michelle Obama speaks of immigration and gay rights, issues which will not offend the interests which have controlled her husband's Administration.  And she criticizes racism and declares that we all should not be afraid to talk about race.   Donald Sterling tried that, in private.  Good luck doing that in public, unless the views expressed are compatible with those of certain people. 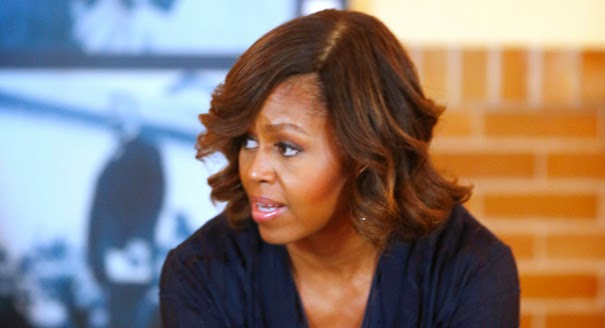