The Patriots Went 16-0. They Lost The Super Bowl And Haven't Won It Since.

On Tuesday, the Guardian neatly summarized the status of same-sex marriage in the USA when it reported

Same-sex couples can now marry in all north-eastern US states after a federal judge struck down Pennsylvania's ban on Tuesday, a day after a similar law was overturned in Oregon.

The Pennsylvania ruling marks the latest victory in what has been a spectacular year for marriage equality. The ruling is the 14th consecutive legal win for gay marriage advocates since the US supreme court's Windsor decision in June 2013 that found part of the federal Defense of Marriage Act (Doma) unconstitutional.

Spectacular, indeed.  After 14 victories, only two are needed to approximate a perfect regular season (16-0) in the National Football League.  Slate's Mark Joseph Stern, in a paean to U.S. District Judge Jones who ruled in the Pa. matter), (perhaps inadvertently) explained this extraordinary run when he maintained "federal judges across the country are writing impressively cogent and increasingly eloquent defenses of marriage equality. These judges know this is their shot at a very specific kind of immortality, and they seem to be in subtle competition with each other to write the one marriage equality opinion that history remembers."

If this analysis is accurate, judges are in a competition not only to write the most memorable passages, but probably also to be the next to rule prohibition of same-sex marriage unconstitutional.

While the equal protection and the due process clauses of the Fourteenth Amendment are typically cited by the judiciary, much of the underpinning of the reasoning lies in the concept of marriage as a fundamental right, with laws limiting the right thus subject to strict scrutiny. A year before the U.S. Supreme Court struck down the Defense of Marriage Act, the American Foundation for Equal Rights identified fourteen (fitting, though completely coincidental) cases- spanning the years 1888 through 2003- in which the High Court found that marriage is a fundamental right.

It is ironic- and advocates of gay marriage should be forgiven a wry satisfaction- that the right to same-sex marriage, resisted by (most)  conservatives, should be ushered in by reinforcement of a value held dear by many on the right.   The website of the National Organization for Marriage, thus, features two articles (of three) which are explicitly supportive of the institution of marriage. They are "National Organization For Marriage Announces Governor Mike Huckabee As Honored Guest And Featured Speaker For June 18th March For Marriage In Washington, D.C."  and "Pro-Marriage Notre Dame Student Remains Resolute" (the third: "Share This Far & Wide!"). Courts to conservatives:  there is a fundamental right to marriage so its restriction to straight individuals violates equal protection.  Conservatives: darn right marriage is the ideal!

And to square the circle, comes a photograph from the Associated Press of a happy Pennsylvania couple, one of the women especially glad because she has gotten an engagement ring because, presumably, there can be no greater aspiration for a woman than to get married: 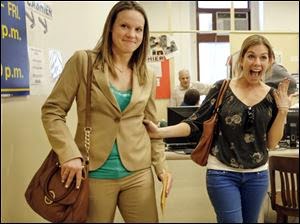 Thrilled to get the bling.  You've come a long way, baby.