Slate's movie critic Carl Wilson, by his own admission, hesitated before writing about an incident involving white rapper Macklemore (photograph from Slate, below), even after the "predictable outrage" over what he concedes was "an apparently anti-Semitic stage costume." It was, however, not much of an outrage; Wilson links to numerous Twitter comments, which is less outrage than murmur.

Given it has not erupted into a major controversy, I hesitated to blog about the matter, but finally recognized how important this story is precisely because it hasn't blown up.  Consider Donald Sterling and numerous other public figures who have made bigoted remarks and found themselves the subject of seemingly endless criticism in the media and among people everywhere.  Wilson explains

The Internet collectively face-palmed last weekend when photos were released of Macklemore wearing what looked like a stereotypical old-Jewish-man costume, complete with false hooked nose and beard, in a surprise show at the EMP Museum in his hometown of Seattle. Worse, the Grammy winner was performing his hit “Thrift Shop” at the time, which made it seem like he was wisecracking about cheap Jews and retail schmattas.

I’ve never thought Macklemore particularly savvy, but the idea that he deliberately went out in anti-Semitic costume seemed out of character. While neither his songs nor his persona appeal to me, what’s usually annoying is how painfully earnestly he strains to show what a sensitive, enlightened, big-hearted bro he is.

Most famously there’s his straight-dude-touting-gay-marriage anthem “Same Love,” which he performed at the Grammys while dozens of same-sex couples in the hall were joined in matrimony. But he’s also one of the few white rappers who’s admitted feeling conflicted about his racial position—in his early song “White Privilege,” he fretted about appropriating and “gentrifying” hip-hop: “I give everything I have when I write a rhyme/ But that doesn’t change the fact that this culture’s not mine … We still owe them 40 acres/ Now we’ve stolen their 16 bars.” Could this really be the same guy prancing around the stage in a shoddy Shylock outfit?

It took a few days for Macklemore to respond with anything longer than a tweet, but if his eventual statement is anything other than sincere, it’s an improbably masterful execution of a “play dumb” strategy. He explains in awkward prose that he’d just grabbed a random collection of costume pieces—including a “witch nose”—as a disguise, so that he could be unrecognized in the crowd before making his appearance. He describes the costume as one part Lincoln, one part Ringo, or maybe “Humpty Hump with a bowl cut.” He just didn’t realize, he says, that anyone could see it otherwise. Finally he apologizes to those he offended and says (again, rather awkwardly) that the silver lining is now he knows about the “incredible” Anti-Defamation League.

On behalf of his organization, Anti-Defamation League President Abraham Foxman responded by asserting "we welcome Macklemore's apology," apparently in part because "we know that Macklemore is someone who has used his platform in the past to stand up and speak out against intolerance and bigotry, particularly homophobia."   (Foxman, a Holocaust survivor, pretends not to notice anti-Semitism is not identical to homophobia.  It is as possible to welcome gay people and not Jews as it is to welcome Jews and not gay people.)

Still, Macklemore- who hid behind the standard and odious "I truly apologize to anybody that I may have offended"- did "acknowledge how the costume could, within a context of stereotyping, be ascribed to a Jewish caricature."

What we're undergoing is an escalation of awareness now that social media can circulate such images so widely and rapidly- along with critics' complaints about them,and the backlash to the complaints, and the backlash to the backlash.  The cycle can be numbing, and the temptation to indulge in the easy pleasures of condemnation and judgment- wanting not to miss out on joining each chorus of disapproval- tends to reduce all the cases to the same thing. But in fact, Macklemore's ignorant boneheadedness isn't alike with Coyne's arrogant obnoxiousness, and Katy Perry's ersatz SNL skit shouldn't be too casually equated with her dad's sectarian bigotry.

Katy Perry's father, Keith Hudson, recently preached at a church in Ohio "You go to L.A. and you own all the Rolex and diamond places. Walk down a part of L.A. where we live and it is so rich it smells. You ever smell rich? They are all Jews, hallelujah. Amen."  Wilson does not link to "Katy Perry's ersatz SNL skit" and, not being as culturally attuned as a movie critic, I have no idea what it was beyond the writer's passing remark that Perry apparently "drape(d) herself in Asian textiles for 'exotic' effect."

And that reflects a growing problem in media criticism and public umbrage. Wilson realizes entertainers should "take a harder look in the mirror when pulling a 'random' costume out of the collective unconscious, and seek second opinions from aides with a minimum of cultural literacy."  But he adds "as audiences in this mongrel land we call planet Earth, I think we're going to have to be prepared to be baffled by racial mix-ups, gaffes, and confusions for a long while yet."

Donning a conservative hat, one could complain "ridicule blacks and get blasted in the media. Ridicule Jews or Asians and you get a pass."  But that would probably be inaccurate, and surely missing the point. Macklemore's and Perry's acts were exactly that: acts.  The comments by Sterling, Roger Ebert, George Allen, Harry Reid, and others (interesting sideshows from Ranker and The Huffington Post here and here) are comments, the spoken word, and resulted in a greater outcry.  Trent Lott may stand as the greatest example: after a long and extremist career culminating in election as Senate Majority Leader, Lott was brought down by a terrible statement commending the late segregationist Strom Thurmond. "Speed kills" has been replaced by "speech kills." Careers (sometimes).

Take a look around the cultural and political landscape.  "The chorus of disapproval" cited by Wilson usually is a response to what some individual says, rather than what he or she does.That is the primary reason you heard over and over again about Donald Sterling but little or nothing about Katy Perry or Macklemore, and have forgotten David Vitter. 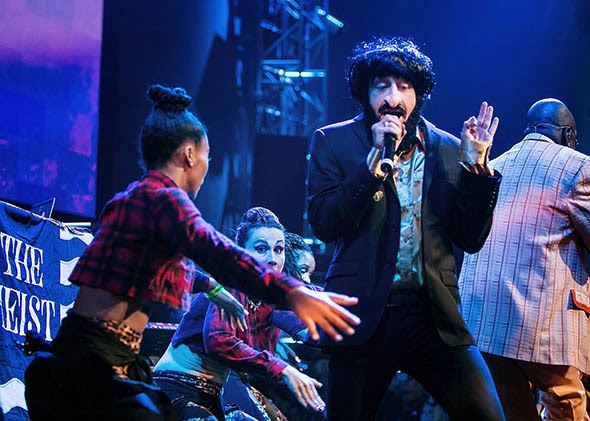