A Liberal Gets Confused, Caught Up In The Enthusiasm

There are extraordinary blogs on this site's blogroll, ones whose authors consistently exhibit tremendous insight in an entertaining fashion.  And then there are others of  a more hit-and miss- variety. Both were on display recently when two addressed the issue of patriotism, one in the context of Ann Coulter and the World Cup, and the other in reaction to comments by two aging musicians.

Talking Point Memo's Catherine Thompson slams Ann Coulter's recent column denouncing soccer (including, but not limited to, the World Cup) in which the conservative pundit equated the sport with liberalism, foreigners, and light rail (no, really). Thompson believes

Leave it to Ann Coulter to try and spoil the fun ahead of Thursday's pivotal USA-Germany World Cup soccer match.... It's worth noting that aside from the Olympics, the World Cup is really the only occasion when an American audience gets a chance to cheer on a national -- rather than a regional -- sports team. But apparently that doesn't jibe with Coulter's vision of patriotism.

Coulter's column may have been written with cheek set firmly in tongue but it's irrelevant, given her habit of being so outrageous the line between absurdity and remarkable intolerance is typically blurred.

Compare Thompson's suggestion that Coulter's failure to cheer on Team USA demonstrates a lack of patriotism with the criticism of No More Mister Nice Guy's Steve M. of the remarks of conservative celebrities Larry Gatlin and Ted Nugent.

Over-the-hill country music star (yet, to his credit, not a star of modern "country" music) and thoughtful intellectual Larry Gatlin (photo below, from Wikipedia) remarked of President Obama "Who elected  this doofus anyway? The liberals and the low-information voters."   Recipient of a student deferment at the height of the Vietnam War, Gatlin added

... we're also being ruled by children of the children of the '60s, who not only don't think -- the difference between right or wrong, they don't even think there is a right or wrong. So when America stands up, patriots stand up, when they believe that it is right to storm beaches in the name of what's right and wrong, and to jump out of airplanes behind enemy lines, and to troop through triple-canopy jungles or the December snows of Chosin Reservoir -- they believe it's right to go do that, that torques these people off, because they don't believe there's a right or wrong!

Steve M. recognizes "Gatlin hates the majority of people who turned out to vote in America in 2008 and 2012- but he loves America!"  He notes also three tweets by over-the-hill (actually, never on top of  the hill) rock guitarist, singer and longtime right-wing Republican Ted Nugent (photo, from Wikipedia, below the other), who on June 28 tweeted "MD MA IL CA NY NJ CO CT DE RI aren't real America anymore," followed by "what a tragedy that only TX SD & AZ are the only states with real freedoms," and finally "with all the clueless ignorant sheep no wonder obama runs amok."  (Stay classy, Ted. And one hit doesn't make a career.)

SM identifies Nugent as "another guy who loves the bejeezus out of America while hating a huge swatch of Americans."

So Catherine Thompson, finding a pundit who rejects World Cup enthusiasm, is annoyed because "the World Cup is really the only occasion when an American audience gets to cheer on a national....sports team. "In this view, those who chant USA! USA! (USA! In your face!) loudest and longest love their nation most.

Appropriately and righteously, just in time for Independence Day, false patriotism has come to an end.  It's hard to define love of country and difficult to identify the most patriotic Americans.  But two things are sure: it's not people who look down on other Americans with contempt oozing for their countrymen because, in their view, the latter are "low information voters."  Nor are they people who wave the flag for an athletic event while screaming at the top of their lungs because it's too early in the day to find a real party. 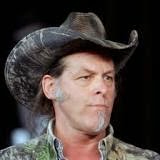 An unrepentant Ann Coulter doubled down with a second soccer diatribe – replete with more absurdity. A new book suggests we should Never Trust Ann Coulter – at ANY Age, available as a free download at www.coulterwatch.com/never.pdf.