It Gives New Meaning to "Inadvertent"


Amid all the controversy over opposition to same-sex marriage in Roman Catholic and evangelical Protestant theology, there has been relatively little said about the attachment to (opposite-sex) marriage in the same faith traditions.

Roman Catholicism holds that there are seven sacraments, which are essential for salvation. One of them is marriage, described by this Catholic theologian as

created by God, and manifested fully to us through the Incarnation, death, and Resurrection of Our Lord Jesus Christ.

Now you may wonder, what does marriage really have to do with Jesus?  He was never married, right? Wrong!  Jesus IS a spouse; he is a husband; he is, in fact, the bridegroom.  And we – the Church – are his bride.  And it is in our marriage to Christ – union with Christ — that our salvation is made complete....

The union of husband and wife in holy matrimony is a living, breathing, incarnate icon of that perfect union of Christ and his Church which is our salvation, our redemption, our ultimate spiritual consummation and bliss.

Traditional, orthodox (note the lower case "o") Protestantism recognizes only two sacraments- baptism and communion- neither of which is necessary for salvation, which is accepted by most evangelical and mainline Protestants.   (Evangelical Christianity is not a separate sect and defies strict definition, with a connotation that goes beyond theology.) But as aficionados of the Bible, they, like Catholics, are devoted to (same-sex) marriage, though not personally averse to divorce when circumstances dictate.

Protestants (to the extent they really are Protestant) rely a little more heavily than do most Roman Catholics on specific Scriptural passages.   They will include Genesis 2:18, in which "the Lord God said, “It is not good that the man should be alone; I will make him a helper fit for[a] him” and 1Corinthians 7:2, 9-10), in which Paul lectures

But because of the temptation to sexual immorality, each man should have his own wife and each woman her own husband... To the unmarried and widows I say that it is good for them to remain single as I am. But if they cannot exercise self-control, they should marry. For it is better to marry than to be aflame with passion.

To the married I give this charge (not I, but the Lord); the wife should not separate from her husband (but if she does, she should remain unmarried or else be reconciled to her husband), and the husband should not divorce his wife.

(In verse 5, Paul advises "Do not deprive one another, except perhaps by agreement for a limited time, that you may devote yourselves to prayer; but then come together again..." That would make most people too tired even to pray. Satisfied, though.)

Paul apparently believed of marriage nearly what the figuratively immortal football coach Vince Lombardi reportedly once said about winning: "Winning isn't everything. It's the only thing."

Given the opposition of many individuals to homosexuality on the basis of their understanding of Scripture, there is an irony in the majority opinion of the Fourth Circuit Court of Appeals when its majority struck down Virginia's same-sex marriage ban on Tuesday. "Virginia's same-sex marriage bans," the Court determined, "impermissibly infringe on its citizens' fundamental right to marry." The money quote may have been

[I]nertia and apprehension are not legitimate bases for denying same-sex couples due process and equal protection of the laws. Civil marriage is one of the cornerstones of our way of life. It allows individuals to celebrate and publicly declare their intentions to form lifelong partnerships, which provide unparalleled intimacy, companionship, emotional support, and security.

Civil marriage is one of the cornerstones of our way of life. Because courts consistently have found a fundamental right to marriage, strict scrutiny must be applied to any effort to abridge its practice.  Christians relying on Scripture have long argued for the sanctity of marriage and for marriage as the primary organizing principle of society.  Judges apparently have been convinced and as a result, have issued a string of decisions favorable to same-sex marriage. It has been a shutout, thus far (cartoon below from Jeff Parker following DOMA ruling).

Further, Judge Floyd, who wrote the majority opinion (joined by another judge with the third judge dissenting), opted for a curious choice of words when he referred to civil marriage as one of the "cornerstones" of American life.  Though its use may have been unintentional, the term "cornerstone" is (choose one) curious, ironic, or poignant.  Believing the Messiah would come from the Judah, the prophet Zechariah advised "from them will come the cornerstone." Paul assured the Ephesians he wrote that  they were "of God's household" with "Christ Jesus Himself being the corner stone." To Peter, "the stone which the builders rejected, this became the very corner stone."

All in all, the cultural right has been very effective in laying the foundation- or cornerstone- for legalization of same-sex marriage in the U.S.A. Well done, in a sense. 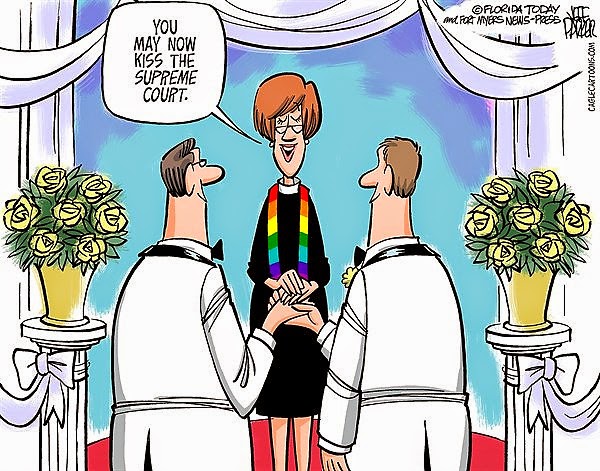 The following is a great tweet and can stand on its own- meaning, of course, that I'm going to take it a step further. This is ostensib...