One of the greatest gifts of the Founding Fathers was civilian control of the military, which a Department of Defense press release in May, 2001 maintained "is so ingrained in America that we hardly give it a second thought. Most Americans don't realize how special this relationship is and how it has contributed to the country."

This is not so clearly practiced elsewhere. The Associated Press early Monday reported

Since the start of Israel-Hamas fighting almost two weeks ago, 348 Palestinians have been killed and 2,700 wounded, according to Gaza Health Ministry official Ashraf al-Kidra. One-fourth of the deaths have been reported since the start of the ground offensive late Thursday.

The Hamas military wing said its fighters exchanged fire with Israeli forces in Shijaiyah and a nearby neighborhood. The sound of gunfire could be heard from the center of the city.

Hamas last week rejected an Egyptian call on both sides to halt hostilities, saying it first wants guarantees that Israel and Egypt will significantly ease their border blockade of Gaza.

If you think there is a major disconnect there, you're reading correctly.  The Egyptian proposal rejected by Hamas was supported by the U.S.A., the Arab League, and the Palestinian Authority and, according to the New York Times, included provisions "for border crossings into Gaza to 'be opened,' and for the movement of people and goods to be 'facilitated once the security situation becomes stable on the ground.'."  Hundreds of Gazans have been killed while the Israeli death toll, due in large part to the Iron Dome missile defense system, inches toward the double digits (map of Gaza below; of the region, below that). Hamas rejected a truce, however, requiring Israel to give up, to "cry uncle," before it would agree to a cessation of violence. 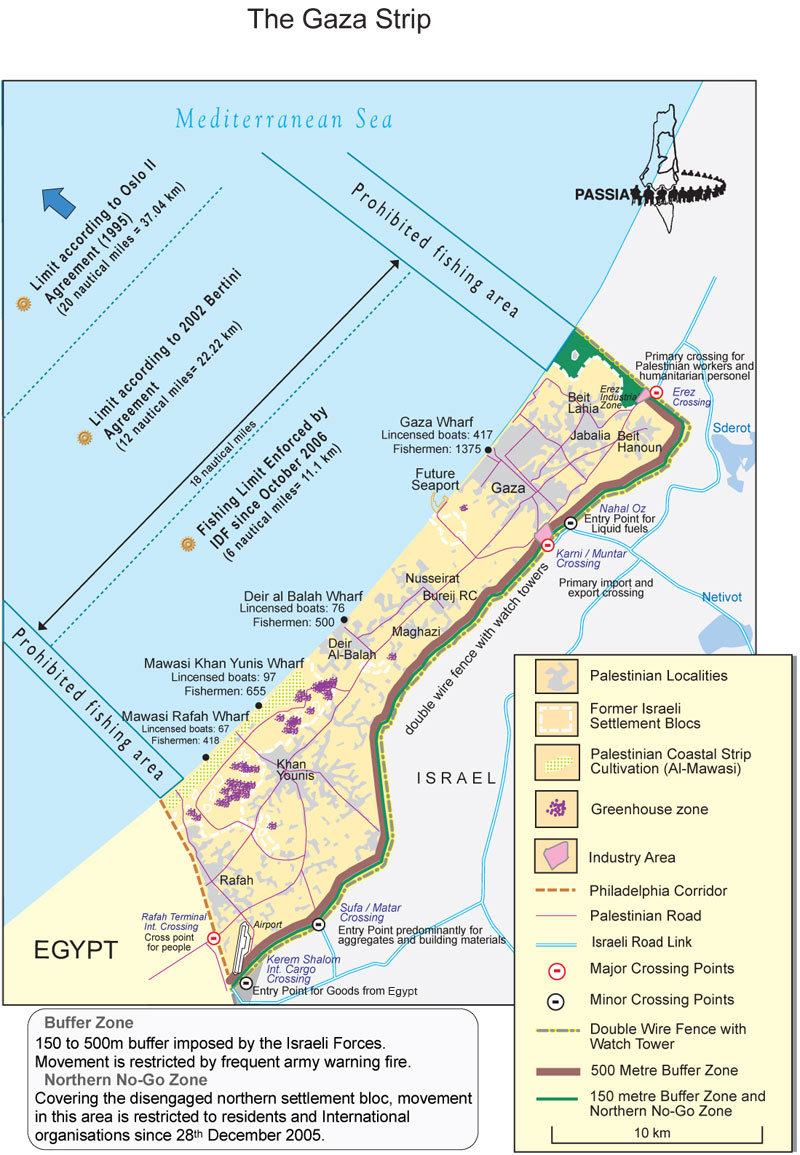 The view that not enough civilians have yet been killed is not a sentiment equally prevalent throughout the organization.  Israeli reporter Shlomi Eldar, described here as "a well-respected Israeli reporter who has extensive first-hand experience with Hamas," explains

the spokesmen of Hamas’ military wing once again threatened that, through its rockets, it would shake the earth of Israel. Again, the military wing, which managed to force down the political wing and drag it along its path, proved not only the extent of its detachment from reality, but also the fact that the suffering of Gaza's 1.6 million residents is nothing to be measured, nor is it a consideration to be taken into account.

At the same time, the film unit of Izz ad-Din al-Qassam Brigades labored over “propaganda products” to scare the Israeli home front. The production house of the Qassam Brigades even uploaded a “song” in Hebrew to YouTube, which has become a joke for many Israelis. It became a joke not only because of how garbled it was and the pathos with which the Hamas men sing an embarrassing song in Hebrew, but mostly because of the distorted worldview of these armed men, who convinced themselves that they were heading a military power with technological and military superiority over Israel.

And so they sang: “Thus you will carry out attacks, burn military bases and soldiers … strive for contact with the Zionists, shake the security of Israel, kill all the Zionists. A country of weakness and delusions, they do not have a standing in war, they are like a spiderweb.”

The Hamas militants borrowed the term “spider web” from the speech of Hezbollah Secretary-General Hassan Nasrallah, who, in the course of the celebration of Israel’s withdrawal from Lebanon in 2000, said, “It [Israel] has nuclear weapons and the most powerful air force in the region, but in reality, it’s weaker than a spiderweb.”

This is merely a “song” that Hamas produced, which is accompanied by dramatic music and photos of the production and launching of rockets. But it illustrates the huge gap between the grasp of reality of the Hamas military wing, which has once again led the Gaza Strip on a tragic adventure, and the end result of this adventure — enormous ruin, destruction and great suffering for residents of the Gaza Strip.

As a journalist covering the Gaza Strip for Israeli television networks, I met Hamas leaders many times, from both the political and military wings, as well as armed militants from the Qassam Brigades, masked men who even then made overblown threats. Most of the young men who were recruited to the military wing of Hamas lived in dire circumstances in Gaza, mainly in the refugee camps. From a young age they had absorbed the messages and militant principles of the Islamic movement, which laid roots in all of the refugee camps starting from the mid-1980s.

The Qassam Brigades' militants of today are children of the second intifada. Even before they were recruited or enlisted in the Qassam Brigades, they drank the jihadist messages that the movement spreads among all the needy of Gaza who knock on the gates of its institutions (the dawa — Hamas’ welfare institutions). The great neglect of Gaza in the years Israel controlled it helped Hamas to grow.

In the past, hundreds of thousands of Palestinians worked in Israel, learned its language, got to know its culture and even formed ties of friendship with their Israeli employers. In the course of the second intifada and Hamas’ rise to power, these ties have all been severed. The older generation found itself unemployed and without income and the youth found work with the militant wing of Hamas and the other organizations (Islamic Jihad as well as the popular resistance committees). These young men, who have not once in their lives left the borders of the Gaza Strip and have never seen Israel, have been fed the stories of the wonders of the Palestinian rocket, which was developed in Gaza’s workshops and can shake Israel. The stories of the glory of Hamas have been impressed well in the young recruits and the doctrine that has been so deeply etched in them has given them the feeling, or the delusion, that salvation could be gained through the rockets that have been developed in Gaza.

As delusional as the military wing of Hamas appears, it may be providing a service to the political wing of Hamas, if the latter can avoid being completely overwhelmed and dominated. It is not unlike the far right wing of the congressional Republican Party in the U.S.A., which is criticized and ridiculed for its narrow-minded extremism.  It gives a patina of respectability to what are then referred to as GOP "moderates," who- considered objectively- would themselves be recognized as extremists.

If the military boys get out of their own way at the right time, the obsession with  violence could possibly persuade the Israelis, fed up with death and destruction, to agree to a deal which would hand Hamas a political victory unobtainable by strictly military means. Although most of the world would breathe a (momentary) sigh of relief, that resolution not only the Israelis, but the Palestinian movement as a whole, would eventually find quite discomfiting.