Bob Somerby, a nearly-constant critic of Chris Matthews, has slammed the MSNBC talk show host for promoting the inconsequential story about the wealth of the Clintons.  He quotes Matthews, periodically posing as the working-class guy from the streets of Philadelphia, on Hardball asking Nia-Malika Henderson "Why don’t we accept them as they are and stop making them like us? Because I don’t know the answer why we want them to be frauds to us. If she’s a little elitist, let her be a little elitist."

Matthews is extremely wealthy, apparently with the filthy lucre he gained from a deal with the devil.

Reportedly, Matthews’ salary went to $5 million in the year 2001. Beyond that, his wife, Kathleen Matthews, holds an upper-end corporate job with Marriott.

Chris Matthews is very wealthy. His summer home, the crib on Nantucket, was purchased in 2004 for $4.4 million—about the price of the Clintons’ two houses combined.

But it's not only Chris Matthews.  Politico reports

Matt Lauer and the rest of NBC’s “Today” show cast took time out of its Thursday morning broadcast to discuss what critics are calling gendered questions from Lauer to General Motors CEO Mary Barra.

“I got a lot of criticism and I said I always thought this was not a gender issue, this is a human issue of work and life balance,” Lauer said in reaction to backlash from his interview that aired one week earlier. “It’s a parenting issue for men and women, moms and fathers, a question I ask myself every single day. But clearly it still touches a nerve.”

Lauer found himself facing critics after he asked Barra, a mother of two, how she handled both tasks of a parent and a CEO. According to Lauer, he asked the question after the GM CEO publicly spoke about missing her son’s junior prom for work. After the interview aired June 26, Lauer issued a statement on his Facebook page.

“It’s an issue almost every parent including myself can relate to,” he wrote. “If a man had publicly said something similar after accepting a high-level job, I would have asked him exactly the same thing … [Work-life balance is] an important topic, one that I’m familiar with personally, and I hope we can continue the discussion.”

Martha Stewart and Kathy Lee Gifford were also on “Today” to join the conversation, and agreed that the subject should not be “taboo.” While Gifford expressed that she feels that women can “have it all,” just not at the same time, Stewart said parents “can’t have it all, but you can try.”

Having more self-awareness than media giants such as these, you know what is missing from this discussion.  "Barra" is the married name of Mary Theresa Makela (photo below from Forbes) who, Wikipedia notes, "is married to consultant Tony Barra, whom she met while studying at Kettering University, and has two children."   Perhaps when asked "Given the pressures of this job at General Motors, can you do both well?"  Mrs. Barra, wife of a man lacking a 9-to-5 job, might have responded "I have a husband to help me."

Lauer doesn't understand. Martha Stewart doesn't understand. Kathy Lee Gifford doesn't understand. These multi-millionaires don't quite understand (or, as they might put it, "get it") as they pretend to be average Joes, people just like the rest of us.  They are far wealthier. Mary Barra- Chief Economic Officer of a company worth a mere $37.4 billion, which recently announced a recall of 8.2 milion vehicles- is far wealthier and far more important.   Her job is more consequential than yours, mine, or those of our neighbors.  If Mary Barra doesn't get it right, an automotive company could go down, with disastrous results for millions of consumers, including workers who rely on her company to get themselves to and from their job.

The ultra-rich are not like the rest of us.  The husband of Mary Barra- whose total compensation this year may top $14 million- can help with the two children.  It's merely a guess but... Tony and Mary probably could put food on the table if Tony quit his job or even retired forever. If his job is so important that he cannot do so (fat chance), $14 billion would go a long way in hiring the best household help, nannies, and the like.

Of course, Mary's involvement in her children's' lives would be ideal. But even without that, the children should do quite well, thank you, with enrollment in the finest secondary schools and colleges and a leg up in the business world. (Their mother is well-connected.) Mary herself ( though evidently thoroughly qualified to be GM's CEO) is the daughter of a long-time Pontiac die-maker.  She earned a B.S. in what was once called "General Motors Institute," then scored a GM fellowship and an MBA from Stanford Graduate School of Business.  Mrs. Barra may always have been an extraordinary individual, but this is no coincidence.

The Barras can do it any way they want- that comes with the territory when a couple earns more than $14 million a year. Good for them.   But this pretense of Lauer, Stewart, Gifford, Matthews and other fabulously wealthy celebrities that they are just like the rest of us must come to an end.  Mary Barra needs only a husband who can suck it up, be a stay-at-home parent, and recognize that marriage to a tremendously wealthy and influential woman can soothe the pangs of not being able to brag at cocktail parties about your own job. 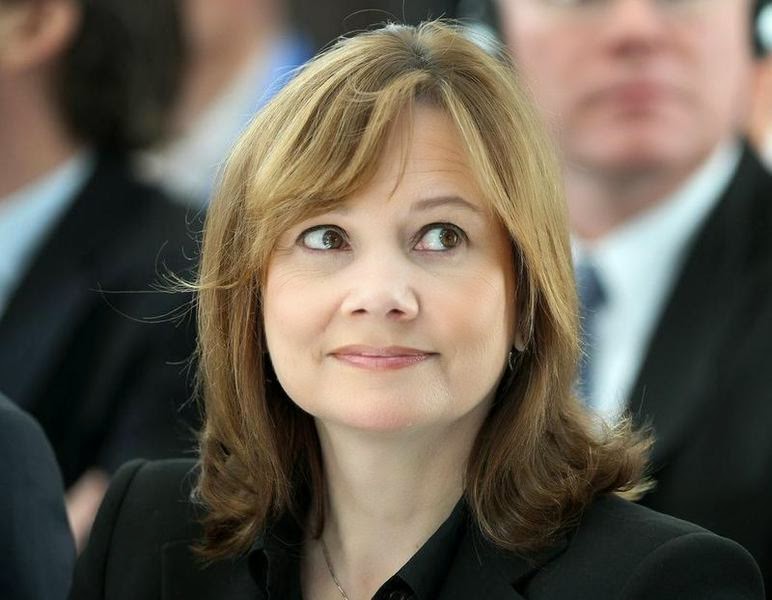