Maybe All McCain Needs Is A Good Meal

Senator McCain must get on a plane.  Restaurant week  is still going on in Los Angeles. But if he can't get away before the 27th, he still has time to catch New York City's restaurant week, which extends to August 15. No doubt in the Big Apple, by far the largest city in the country, exciting, and even exquisite, culinary options are available.

But as expensive as New York- or at least Manhattan- is, McCain may want to wait until August 13 and get in on Denver's restaurant week.  Then he can hop a plane and go to Stamford, Connecticut, which is celebrating restaurant week from August 18 to September 2.

This all sounds silly but Senator McCain really, really is anxious to go somewhere special for dinner. Politico reports

Sen. John McCain turned amateur psychologist on Wednesday and diagnosed President Barack Obama with a lack of desire to “social interface” with people and with “self-pity.”

“The self-pity that Obama continues to exhibit is really kind of sad, really,” McCain said on Wednesday during Fox News’ “On the Record with Greta Van Susteren.”

McCain’s comments came in response to a comment from Obama at a California fundraiser that suggested that the GOP is not “loyal and rational.”

“You know, I can’t work with him at all,” McCain said. “When is the last time he really called leaders of both parties together over at the White House, say, for a dinner, a social event.”

When asked why Obama has not sent out bipartisan invites to the White House, McCain said, “I cannot explain it except to say that he does not have this desire to have social interface with people and sit down and try to work things out.”

Senator McCain's interest in bipartisan action, however, appears not to be held by House Speaker John Boehner who, responding to the crisis of thousands of children illegally crossing the southern border, declares of President Obama's proposal  "I don't have as much optimism as I'd like to have" about action before Labor Day.

Senator McCain probably wasn't thinking about "social interface" and working things out when he referred to "a cowardly administration that failed to give the Ukrainians weapons with which to defend themselves."  Nor when he called U.S. policy in Syria an "abysmal failure and a disgraceful one."   Nor when he labeled the situation in  Iraq a "colossal failure of American security policy."

Given McCain's propensity to slam every inch of President Obama's foreign policy, his remarks about Iraq are mild, perhaps because the Senator may sense that the whole escapade has been a dismal failure.  At an event hosted yesterday by CNN and National Journal, McCain commented "I think I would have challenged the evidence with more scrutiny. I hope that I would have been able to see through the evidence that was presented at the time... You'll find this surprising but I think I would have been more reluctant to commit American troops."  That's at least halfway to an admission of mistake.

Such introspection, however, doesn't reveal to McCain that much of the testosterone-infused commentary about Iraq amounts to a classic case of sunk cost fallacy.   Neither does it deter Senator McCain from attributing Obama's approach to Iraq as infused with "self-pity."

"Self-pity" is the biggest crime in GOP-land.    Many Repubs live by the credo of never admit error. Never admit uncertainty. Never admit weakness.  Do not contemplate; do what feels right.  If President Obama were even more bipartisan (cartoons below by, respectively, Joel Pett of the Lexington Herald Leader, Steve Sack of the Star Tribune and Ben Sargent ), it would be perceived as even greater weakness. then the Republican Party would be really annoyed. 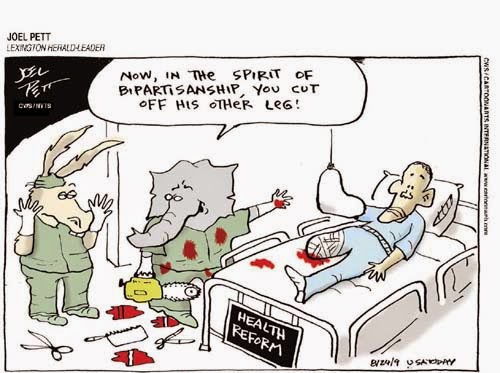 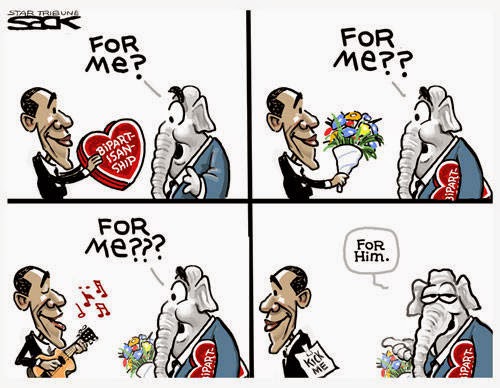 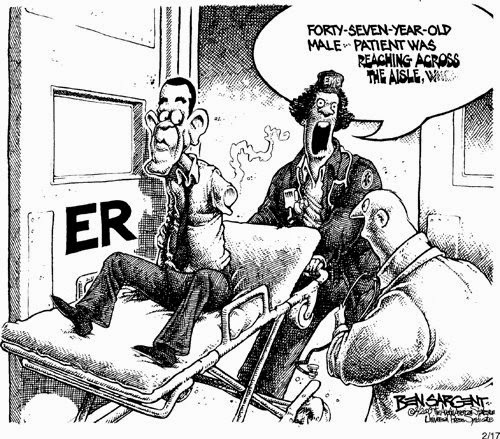