Entitlements As Persons Of (Claimed) Faith

Mr. President, during your first presidential campaign you were asked your views on same-sex marriage. You responded: "I believe that marriage is the union between a man and a woman. Now, for me as a Christian, it is also a sacred union. God's in the mix... I am not somebody who promotes same-sex marriage."

You justified withholding your support for same-sex marriage, at least in part, by appealing to your Christian faith.

Or as they were too polite to translate, a la Reverend Jeremiah Wright (and many others before him): "The chickens have come home to roost."

President Obama reportedly will issue an Executive Order barring discrimination by federal contractors on the basis of sexual preference or gender identity.    In its letter to Obama, the group, including Reverend Rick Warren of Saddleback Church, is requesting a "robust religious exemption" akin to that in the Employment Non-Discrimination Act recently passed in the Senate and stalled (because of a controversial religious exemption) in the House (Washington Blade cartoon by Ranslem, below). 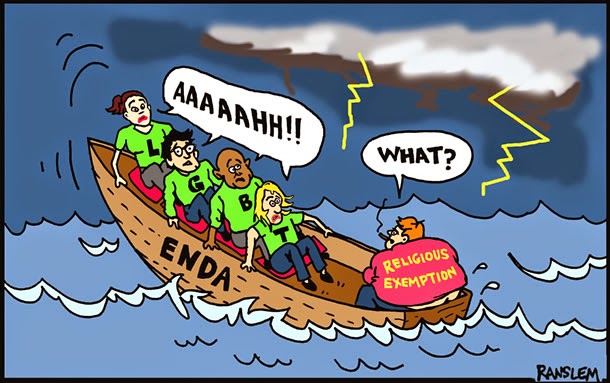 While conceding "banning discrimination is a good thing," the seven men and two women complain "religious organizations will lose federal funding that allows them to serve others in the national interest due to their organizational identity."  Moreover, "we still live in a nation with different beliefs about sexuality. We must find a way to respect diversity of opinion on this issue in a way that respects the dignity of all parties..."

One is urged to say: equal protection is good for thee, not for me.  More fairly, either these folks believe themselves that discrimination is acceptable or they are saying that other, less fair-minded people, do.  And that these are the individuals or organizations which fund them. Money talks, b_ _ _ _ _ _ _ walks.

The group maintains "all persons are created in the divine image of the creator, and are worthy of respect and love, without exception."   Still, they believe contractors who claim a Christian faith ought to be allowed to discriminate on the basis of sexual preference and gender identity and be the recipient of taxpayer largess in the form of federal grants.  Other contractors must play by a different, somewhat more constraining, set of rules

More artfully than sincerely, the group expresses concern for "the hiring process of these organizations- Christians, Jews, Muslim, and others."  But neither the Old or the New Testament counsels discrimination or provides a rationale for granting an exemption or preference in the law for those who would practice it. Instead, advantage must be proferred unto contractors claiming their own personal interpretation of Christianity or Judaism.

No good deed goes unpunished, it is said. Similarly, offering an olive branch to evangelical leaders is unlikely to deliver the desired results.  Barack Obama had Rick Warren give the invocation at the 2008 presidential inauguration, months after Obama explained he opposed same-sex marriage in part "as a Christian."

But theocrats are little interested in half-measures, compromise, or reaching an accommodation consistent with the wall of separation found in the First Amendment, as we will increasingly see in response to the Supreme Court's Hobby Lobby decision.