One Nation, One Religion Interpreted One Way


Congress shall make no law respecting an establishment of religion, or prohibiting the free exercise thereof; or abridging the freedom of speech, or of the press; or the right of the people peaceably to assemble, and to petition the government for a redress of grievances.


We found out June 30 that the U.S. Supreme Court- or rather five Justices of it- believe the Court is not a co-equal, but rather superior, branch of the U.S. government (plaintiff's attorney pictured below, from Slate).  For though Congress "shall make no law respecting an establishment of religion," the Supreme Court evidently may interpret a law, in this instance the Religious Freedom Restoration Act, as an acceptable establishment of religion.  It was hardly surprising, though still revolting, when (text of decision, here)

Some corporations have religious rights, a deeply divided Supreme Court decided Monday in ruling that certain for-profit companies cannot be required to pay for specific types of contraceptives for their employees.

The 5-4 decision on ideological lines ended the high court's term with a legal and political setback for a controversial part of President Barack Obama's healthcare reform law.

It also set off a frenzied partisan debate over religious and reproductive rights that will continue through the November congressional elections and beyond.

All five conservative justices appointed by Republican presidents ruled in favor of closely held for-profit businesses -- those with at least 50% of stock held by five or fewer people, such as family-owned businesses -- in which the owners have clear religious beliefs.

There was interest- but little doubt- in how Antonin Scalia would rule, given that when two guys were fired from their jobs because they used peyote for sacramental purposes in their Native American Church, Scalia had written- correctly-

To permit this, would be to make the professed doctrines of religious belief superior to the law of the land, and in effect to permit every citizen to become a law unto himself. The rule respondents favor would open the prospect of constitutionally required religious exemptions from civic obligations of almost every conceivable kind, ranging from compulsory military service, to the payment of taxes, to health and safety regulation such as manslaughter and child neglect laws, compulsory vaccination laws, drug laws, and traffic laws; to social welfare legislation such as minimum wage laws, child labor laws, animal cruelty laws, environmental protection laws, and laws providing for equality of opportunity for the races.

But that was then (1990) and this is now, or rather, that was a Native American/American Indian church, and Scalia belongs to a very different church indeed, as do the other four members of Monday's majority. Charles Pierce, himself a (lapsed) member of that faith, remarks

... let us look also at the religious discrimination embedded in the Court's logic. There are established religions in this country—Jehovah's Witnesses, to name one—that forbid their members to accept blood transfusions and to resist vaccinations. These are not small things. They are the basis for Christian Science. There have been religious objections to compulsory vaccinations going back to a movement among some clergy in Boston in the late 18th century. Until such time as a Jehovah's Witness owns a multibillion-dollar scrapbooking empire, and thereupon declines to offer blood transfusions to the employees of said company, and until such time as someone pushes that case all the way up the ladder, it looks very much to me like the Court, in limiting today's finding in this way, has decided to define what are acceptable religious beliefs and what it considers to be merely weird ones. And, moreover, the Court's curious limit as described above lends an undue amount of credence to specific manifestations of Christianity—namely a segment of fundamentalist Protestantism, and the conservative elements of Roman Catholicism.

Associate Justice Samuel Alito, who earns $244,400 per year and who with the other Justices constitutes the Court From Which There Is No Appeal, has an answer to the notion that members of other religions will be held in equally high esteem:

This decision concerns only the contraceptive mandate and should not be understood to mean that all insurance mandates, that is for blood transfusions or vaccinations, necessarily fail if they conflict with an employer's religious beliefs.

As the court extends the personal protections of the Religious Freedom Restoration Act to for-profit corporations, like the one belonging to Hobby Lobby’s Green family, with its more than 500 craft stores and more than 13,000 employees, it does so with the promise (pinky swear) that it will not ripple into a series of disastrous outcomes when employers decline to afford their workers vaccinations, or psychiatric care, or equal pay, based on similarly strongly held religious convictions.

"Nor does" the decision, Alito intones, "provide a shield for employers who might cloak illegal discrimination as a religious practice."  Employers who wish to discriminate now are on notice not to label their choices "discrimination."  Instead, if birth control is heretical, choose a retirement plan with mutual funds with holdings in the specific forms of birth control you're condemning, and import plenty of products from mainland China, in which women refrain from abortion at their peril.. Principle has its limits, of course.

As does this ruling, which Alito warns must not be used as precedent, reminiscent of Bush v. Gore, in which the majority held "Our consideration is limited to the present circumstances, for the problem of equal protection in election processes generally presents many complexities."   That decision was issued not in the name of a particular Judge but per curiam, used only in minor cases and for selecting a President. The only principle was the necessity for a Republican to be chosen President.  Principle has its limits, of course.

Alito allegedly based his ruling on the RFRA (passed in the Administration of progressive hero William Jefferson Clinton), about which Peters comments:   "And yes, you are still entitled to ask, "Restoration? Where's it been?" One suspects, however, any old excuse would have worked. The decision did not violate the First Amendment in word:  Congress is enjoined from acting in service of establishment of religion.  In spirit, though, the Court has done its part in establishing religion, and one particular religion, and one interpretation of that religion.   To which Justice Scalia might reply, as he has to critics of Bush v. Gore: "Get over it." 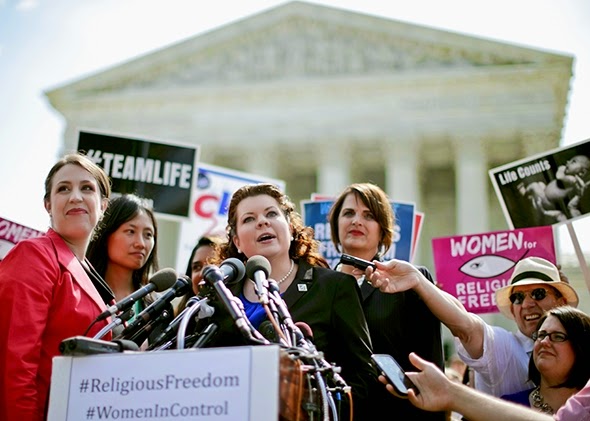