And He Doesn't Own A Dog Named Checkers

No, not that Nixon (button, above) and probably not Democratic Governor Jay Nixon, either, who is visiting Iowa to advance the economic interests of Missourians. According to The Daily Beast, the governor (photo below) with the most unfortunate surname

is visiting Project Liberty, a brand new ethanol plant that processes cellulosic ethanol, which is made from the waste parts of corn like the husk and the cob. In contrast, traditional ethanol is made from the actual corn kernels.

Poet, the company which operates the plant, has several plants in Missouri and Nixon is apparently going to promote the new process and encourage similar plants to be built in his home state. 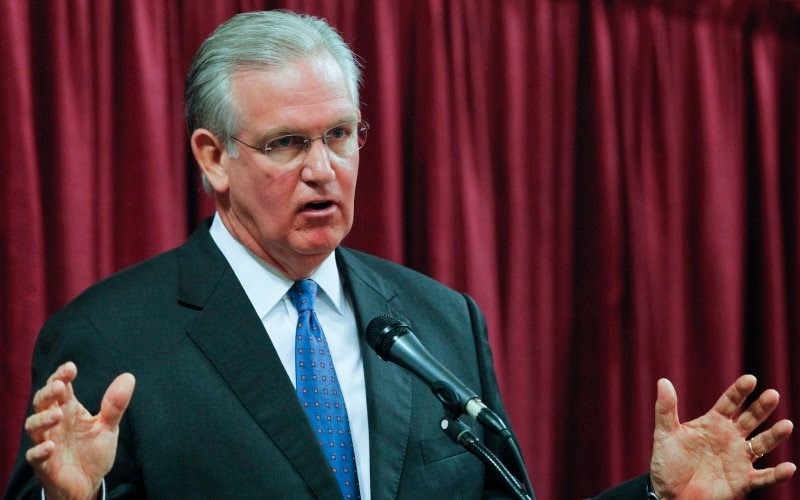 Still, given the dearth of Democrats willing to challenge putative nominee Hillary Rodham Clinton, the visit by Missouri's chief executive is intriguing, especially given his apparent understanding of at least one issue, public school security.  ABC News last week reported

The veto by the Democratic governor sets up a potential showdown with the Republican-led Legislature, which could override Nixon if it gets a two-thirds vote of both chambers during a September session.

Nixon announced the veto with a written statement on the deadline day for him to take action on bills passed earlier this year.

"Arming teachers will not make our schools safer," he said. "I have supported and will continue to support the use of duly authorized law enforcement officers employed as school resource officers, but I cannot condone putting firearms in the hands of educators who should be focused on teaching our kids."

Most significantly, the Governor has vetoed a bill which would have provided for some public school employees to portray law enforcement officers.  Educators "should be focused on teaching our kids," the governor noted, understanding that neither teachers nor administrators are police.   If educators are expected to carry concealed weapons, they likely won't focus on teaching the children. If they do, it's thenew role which won't be executed effectively.

Additionally, this would establish a two-tiered system in which one set of teachers would be granted a special kind of status, with the other educators of a lesser standing. That is injurious to the profession, as it would be to the members of it.

Nixon also recognizes what some on our side don't, given that he has evidently "supported and will continue the use of duly authorized law enforcement officers employed as school resource officers."  Police judiciously stationed in some schools can provide a needed law enforcement function and might present to young people a positive image of the profession disturbingly absent in many neighborhoods.

In most instances, police officers understand their power, the limits duly placed on that power, and the consequences of abusing that power.  Educators can be trained but they are, at base, individuals whose personalities led them to choose careers in teaching children rather than in carrying weapons and responding to delinquency or crime.

Teachers are teachers. Police officers are police officers. That should be easy to understand and in Missouri, the governor does.