Another President, Another Plan

Turnabout is fair play, however, and given the dishonest propensity of the right to term any immigration reform "amnesty," conservatives may end up being stuck with the word "undocumented," a rather benign way of saying "came here contrary to law."

In his brilliantly crafted statement, President Obama stated also "As my predecessor, President Bush, once put it, they are a part of American life."  That was a mere ten sentences before he would point out "It does not grant citizenship or the right to stay here permanently, or offer the same benefits that citizens receive. Only Congress can do that. All we’re saying is we’re not going to deport you."

A sense of shame would have prevented a president from warmly presenting human beings as "a part of American life," then almost immediately bragging they won't be given a chance to become citizens or have the benefits other people have. They are part of American life; on second thought, they are not. Truthfully, though, most successful politicians have little sense of shame, or they would not be successful; a fact of electoral life.

Notably (though few if any will note it) President Obama chose to mention only one previous president, George W. Bush. Gregory Korte of USA Today maintains "speechwriters dusted off President George W. Bush's 2006 speech on immigration, and built Obama's remarks around it."

Perhaps that was only fair to Obama's immediate predecessor, given that the Spanish-speaking Bush garnered far more Hispanic votes in his election and re-election to the presidency than did the English-speaking John McCain, who at one time actually supported comprehensive immigration reform.   Or perhaps it was an appeal to conservative voters, who recognize (or should recognize) GWB as extremely conservative while at the same time not unsympathetic to illegal immigrants- uh, er, undocumented workers.

Presumably, President Obama would have referred to George W. Bush's father, were the latter not considered a RINO by many Republicans., because the actions of the 44th President on immigration policy bear a stark resemblance to those of the 41st.

In an analysis upon which Politifact relied heavily in finding the two Presidents' actions similar, Dara Lind of Vox (its graph of "rise in unauthorized immigrant population," below) explained

After the Immigration Reform and Control Act (IRCA) passed in 1986, about 2.7 million previously-unauthorized immigrants were able to apply for legal status, which they could ultimately turn into green cards and eventual citizenship. But there were strict requirements about who could get legalized: most importantly, immigrants had to have been in the US since 1982. And that meant some members of families were eligible while others weren't. If an immigrant who was eligible for legalization under IRCA had a spouse or a child who wasn't eligible, the spouse or child was out of luck.

In 1990, President George H.W. Bush expanded the program, to allow any child or spouse of someone who was getting legalized through IRCA to apply for extended voluntary departure. That expansion made it much broader than the original program.

Bush gave the program a new name: Family Fairness. That's the action that is most comparable to Obama's actions now. 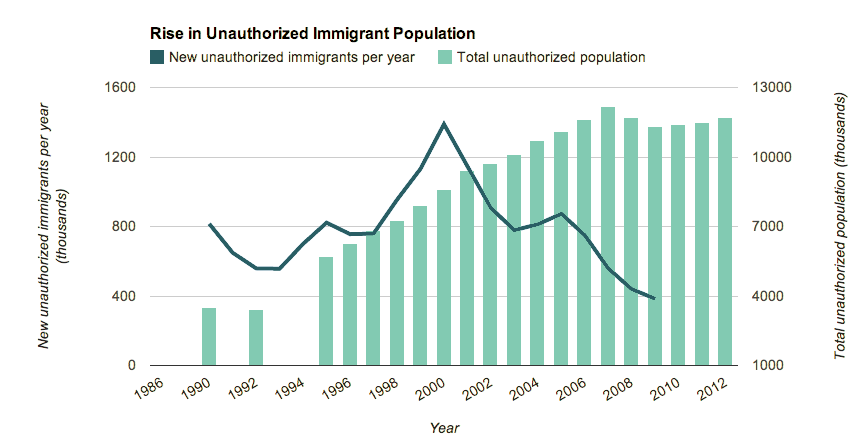 Not only were the policy and the strategy similar, so too was the scope, insofar as "Bush's executive action protected about 40 percent of America's unauthorized immigrants at the time. That's roughly comparable to the action Obama is expected to take, covering 4 million of the nation's 11 million unauthorized immigrants...."

President Obama did not refer to the immigration policy of his favorite president, Ronald(6) Wilson(6) Reagan(6), who proudly signed in 1986 the Immigration Reform and Control Act, which did little controlling and reformed policy by allowing illegal immigrants to apply for legal status.

While Reagan, unlike Obama, acted (primarily) legislatively and granted actual amnesty, the approach of the 40th President bore was a little similar to that of the 44th. President Reagan did not convey citizenship and President Obama's executive order does not convey citizenship either, with the President assuring us "it does not grant citizenship or the right to stay here permanently, or offer the same benefits that citizens receive." He added, "millions of us, myself included, go back generations in this country, with ancestors who put in the painstaking work to become citizens. So we don't like the notion anyone might get a free pass to American citizenship."

And no, they won't get a free pass.  Under the terms even of the reform bill the Senate approved, the House ignored, and Obama supports, citizenship for most illegal immigrants would be unavailable for thirteen years.

Ronald Reagan had an idea to fix an immigration system. Yet 28 years later, it is "broken," a term of art cleverly used three times by Obama, who realizes no one would disagree it is broken while people vigorously disagree on the reason and the remedy.

Five presidents (Reagan, Bush 41, Clinton, Bush 43, and Obama with his DACA initiative) over the course of 28 years have tried to fix the mess by easing up on enforcement. The system  now is even more "broken." This may be a pattern.