You Can't Miss With A Bill Cosby Reference


At the beginning of his closing argument in his immigration speech on Thursday, President Obama rhetorically asked "Or are we a nation that finds a way to welcome her in? Scripture tells us, we shall not oppress a stranger, for we know the heart of a stranger. We were strangers once, too."
Mike Huckabee on his Facebook page was not amused and commented

It is interesting that Obama cites Scripture as the justification for him taking unilateral action on illegal immigrants.

Funny how, for the first six years of his Administration, even the two years when he had unstoppable majorities in both houses, Scripture did not compel immediate action. But two weeks after the final election he'll have to deal with, suddenly, Scripture requires us to do this.

It's similar to the way that his Biblical beliefs led him to oppose same-sex marriage as a candidate for election. Then when he needed big campaign donations from gay liberals for his reelection, the Bible suddenly got rewritten.

I always thought that Scripture was eternal and unchanging, but apparently, now that Obama is President, Scripture gets rewritten more often than Bill Cosby's Wikipedia entry.

This, in turn, did not amuse the blogger I most often quote, who responded

Eternal and unchanging? How about this:

Exodus 22:21
"Do not mistreat or oppress a foreigner, for you were foreigners in Egypt.

Exodus 23:9
"Do not oppress a foreigner; you yourselves know how it feels to be foreigners, because you were foreigners in Egypt.

Deuteronomy 24:17
Do not deprive the foreigner or the fatherless of justice, or take the cloak of the widow as a pledge.

Deuteronomy 24:18
Remember that you were slaves in Egypt and the LORD your God redeemed you from there. That is why I command you to do this.

Deuteronomy 27:19
"Cursed is anyone who withholds justice from the foreigner, the fatherless or the widow." Then all the people shall say, "Amen!"

When quoting Scripture in defense of a political perspective, one needs to be very, very careful. Here, for amusement sake, are a few passages Digby never would cite, all from the English Standard Version:

Now we know that the law is good, if one uses it lawfully, 9 understanding this, that the law is not laid down for the just but for the lawless and disobedient, for the ungodly and sinners, for the unholy and profane, for those who strike their fathers and mothers, for murderers, 10 the sexually immoral, men who practice homosexuality, enslavers,[a] liars, perjurers, and whatever else is contrary to sound[b] doctrine (1 Timothy 1:8-10)

For this reason God gave them up to dishonorable passions. For their women exchanged natural relations for those that are contrary to nature; 27 and the men likewise gave up natural relations with women and were consumed with passion for one another,men committing shameless acts with men and receiving in themselves the due penalty for their error. (Romans 1:26-27)

You shall not lie with a male as with a woman; it is an abomination. (Leviticus 18:22)

If a man lies with a male as with a woman, both of them have committed an abomination; they shall surely be put to death; their blood is upon them. (Leviticus 20:13)

It would not be sensible to put to death a man who has sex with another man.  Nor, for that matter, is it wise to put a great deal of stock in a biblical verse to support a political position.

And it's not only immigration or homosexuality on which we can quote Scripture, both misleadingly. We go to Genesis 15: 18-21 in which Moses (inspired by God, it is contended) wrote

On that day the Lord made a covenant with Abram, saying, "To your offspring I give this land, from the river of Egypt to the great river, the river Euphrates, the land of the Kenites, the Kenizzites, theKadmonites, the Hittites, the Perizzites, the Rephaim, the Amorites, the Canaanites, the Girgashites and the Jebusites.

That's it; problem solved. As the map below indicates, that would be the end of a Palestinian state, at least the Arab Palestinian state to which "Palestinian state" refers, because Israel would include everything within the circled area.  The Israel-Palestine issue is resolved, all with no more thought than is necessary to read Exodus. 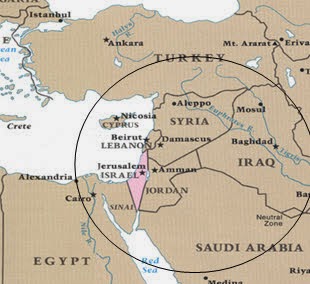 That would not be very helpful, fair,or productive.  But it is as much- no, more- relevant to the middle eastern conflict than "do not mistreat or oppress a foreigner, for you were a foreigner in Egypt," is to immigration policy.  That, and the related verses, say nothing about jobs, visas, immigration quotas, or sovereign boundaries.

If God gave us the Bible, surely he gave us the capacity to think on our own.  Scripture may inform our values, but it should not bear heavily on the policy decisions of a great republic or its constituent parts. Someone notify Barack Obama.