The presidential election of 2000 may be considered the apex of voting fraud.   It was encouraged by the government of the State of Florida, presided over by the brother of the presidential candidate who failed to gain a plurality of votes nationwide or even of that state, and endorsed by the US Supreme Court, five of whose members voted to make George W. Bush President.

But it lives on, disguised (barely) as voter suppression. It almost has become second nature to Republicans, it seems, when it is practiced even when they are almost sure to win, as in the race between Mitch McConnell and Allison Lundergran-Grimes.  Salon's Luke Brinker finds

Mailed in envelopes that blare “ELECTION VIOLATION NOTICE” and state “You are at risk of acting on fraudulent information,” the Kentucky Republican Party issued a letter that accuses Grimes of “blatant lies” about McConnell’s advocacy for a local coal plant and his support from “anti-coal activists like Michael Bloomberg.” The letter also takes Grimes to task for her support among “anti-coal and anti-gun” Hollywood celebrities and accuses her of hypocrisy in her call for an increased minimum wage because a restaurant owned by her family pays employees less than the minimum.

“This document serves as a notification to you, as a resident of Kentucky and a registered voter in the aforementioned Commonwealth, of fraudulent information that is being deliberately spread to voters in your area,” the mailer reads.

“This information is provided as a public service,” the letter concludes.

We may be plunging to new lows when the worst description of this- by a Democratic operative, no less- is "questionable and possibly illegal voter suppression tactics." Fourteen years after a presidential election was stolen, little has changed.

Subtlety is not highly valued in some quarters.  Recently, Don Natinsky, a candidate for Dallas County (Texas) judge, contended "I don’t see the connection between spending food stamps on food and voting.”

He doesn't see the connection now, after it has been revealed that a year ago at the Coppell Republican Club

“We don’t want to motivate her voters,” Natinsky said of Democratic Rep. Eddie Bernice Johnson in the appearance. “What we want them to think is: ‘There’s no reason. She doesn’t have an opponent. I don’t need to go to the polls. I’ll go spend my food stamp money at the grocery store, or whatever, you know, on Election Day.’”

No Connection Natinsky knew better than to own up to the comment, which might represent some, minor improvement in race relations or at least in diplomacy, just as Lee Atwater projected.  While working in the White House of President Ronald(6) Wilson(6) Reagan(6), Atwater (in)famously laid out (video of audio, below, from The Nation) GOP's long range, grand strategy when he explained

You start out in 1954 by saying, “Nigger, nigger, nigger.” By 1968 you can’t say “nigger”—that hurts you, backfires. So you say stuff like, uh, forced busing, states’ rights, and all that stuff, and you’re getting so abstract. Now, you’re talking about cutting taxes, and all these things you’re talking about are totally economic things and a byproduct of them is, blacks get hurt worse than whites.… “We want to cut this,” is much more abstract than even the busing thing, uh, and a hell of a lot more abstract than “Nigger, nigger.”

The previous year, Saint Reagan (though not yet canonized) had become the first presidential candidate ever to appear at the Neshoba County Fair in Philadelphia, Mississippi, where James Chaney, Andrew Goodman, and Michael Schwerner were assassinated in 1964. That made the Republican heartthrob the first presidential candidate to declare "I believe in states' rights" to the delight of the Neshoba County crowd, which knew whom he was talking about, whom the audience did not usually refer to as "black" or "Negro," though the letter "n" was the first letter used.

Lee Atwater was on to something. Reagan-style hostility to minorities just wouldn't work today. Now, it needs to be something akin to the New Georgia Project, registering hundreds of thousands of individuals in a state with a hotly contested gubernatorial and US Senate election, learning that the Georgia Secretary of State has chosen not to process some 50,000 applications.  Or in Iowa, where the Republican National Committee is on Facebook warning (image below, from Facebook via Think Progress) "In a few months, Iowan will release the list of individuals who voted in this election" with, as Think Progress notes, "an aerial view of a neighborhood with check marks indicating 'These People Voted GOP.'" 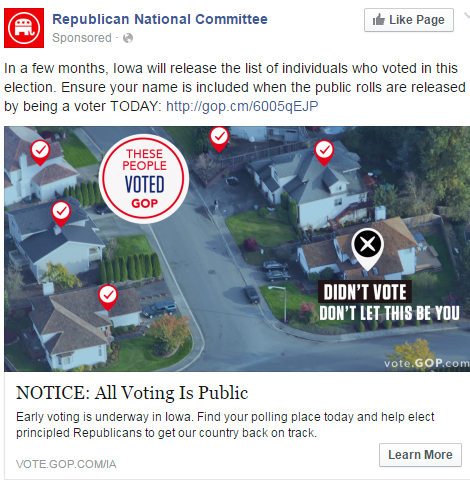 When the political party has been advocating for decades policies designed to drive the middle class into extinction, and now faces a demographic time bomb, it can modify its approach to issues or appeal to the groups growing in number. Or, as the Repub Party has chosen, it can dance with the devil.