Reflecting on Election Day 2014, Philadelphia Daily News columnist and blogger Will Bunch makes about 87 good points, roughly 31 above his average, in Wednesday's "The Democrats' Goldwater Moment." But I have to call him on one thing- an election covered extensively both before (video below from late October) and after November 4 by Rachel Maddow.  Bunch writes

It was no surprise that Republicans solidly re-took control of the Senate, in a year where the map was stacked toward red states, with a bunch of seats that the Dems probably had no right holding in the first place  But what was shocking was losing governor's races in solid-blue, progressive-minded states like Maryland, Massachusetts and Illinois. Indeed, can you name one race where a Democrat exceeded the pre-election expectations, or pulled a true upset?

He should have said "one federal race." Although there exists one or two , there exists, well, one or two.  But one set of municipal races, though close, may be considered an exception. It occurred, moreover, in California, whose political winds at one time were considered harbingers.  Common Dreams reports

A slew of progressive candidates were elected in Richmond, California on Tuesday night in a resounding defeat of corporate power, after a multi-million-dollar opposition campaign funded by Chevron brought national attention to the race but failed to take control of City Hall.

Collectively, those candidates became known as Team Richmond. In a victory speech from his campaign base, Butt said, "I’ve never had such a bunch of people who are dedicated and worked so hard. It’s far away above anything that I’ve ever experienced."

The sweeping win in the David-and-Goliath story was seen by many as an excoriation of corporate influence in elections after the U.S. Supreme Court's Citizens United decision.

Uche Uwahemu, who finished third in the mayoral race, said, "The election was a referendum on Chevron and the people obviously made it clear they did not appreciate the unnecessary spending by Chevron so they took it out on the rest of the candidates."

Chevron spent more than $3 million funding three political action committees that executed an opposition campaign including billboards, flyers, and a mobile screen, spending roughly $72 per voter in hopes of electing a slate of candidates that would be friendly to the oil giant.

Martinez, Beckles, and McLaughlin have all criticized the company and promised to tighten regulations on it. Chevron has an ugly history in the city, particularly in the wake of a large and destructive fire at their refinery in 2012, for which Richmond sued the company.

The voters of Richmond (photo below from Malena Mayorga/Flickr of the Asia Pacific Environmental Network marching against Chevron on 8/9/14) knew both what Team Richmond, as well as its opponents, stood for and who they stood with.  That conveniently fits in neatly with another of Bunch's comments, in which Will recognizes

It's not a matter of moving further to the left, not really. It's just a question of standing up for the forward-looking and mostly progressive platform bullet points that you already have. Because the problem, Democrats, is not with what you believe, but that people don't believe that YOU believe in what you say you believe. In fact, they flat out don't believe you, not right now. And that lost trust isn't something you can't win back overnight. Goldwater, Reagan, and the Republicans didn't get a majority to trust them right away, either. 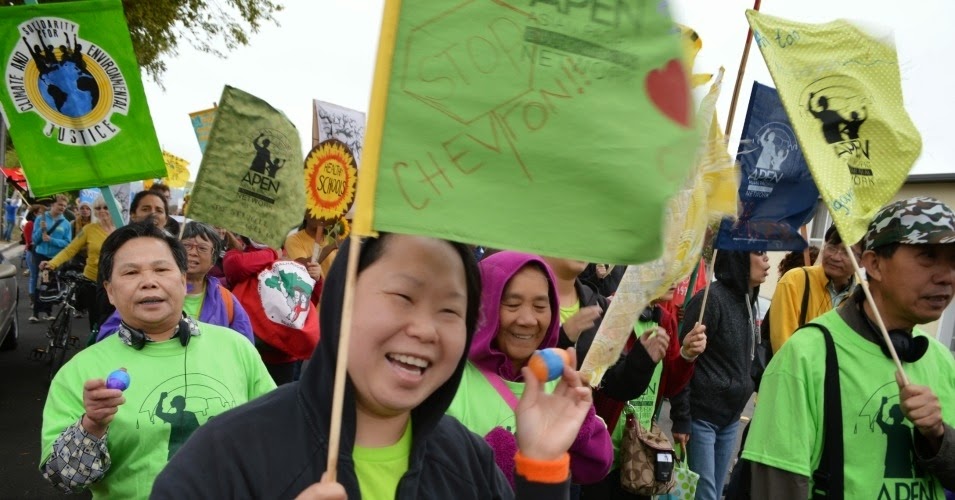