Piers Morgan Says Something Which Shouldn't Be Necessary. Apparently, It Is.

A 6-letter noun in the English language which the dictionary defines as ‘a contemptuous term for a black or dark-skinned person’.

It’s such an inflammatory and offensive word that for any high profile white person to publicly use it, without abbreviating to ‘N-word’, is rightly tantamount to professional suicide and personal opprobrium.

I don’t use it; would never use it. But it has become astonishingly ubiquitous in modern American society.

The reason it is so ingrained in pop culture is that many blacks, especially young blacks reared to the soundtrack of N-word splattered rap music, use it in an ironic way.
They’re aware of its history; they know from their parents and grandparents that arrogant, dumb, racist whites used it as a wicked, derogatory insult against their black slave forebears. And they enjoy the freedom of being able to say it now in the knowledge that it’s become taboo for whites to do so....

And this is why: it doesn’t work. It has the complete opposite effect to the one that I imagine everyone who does this imagines it will have.

Far from ‘owning’ these words, seizing back control with the use of them, I believe it merely serves to empower those who wish to deploy them abusively - and encourage them to continue doing so.

Your average dim-witted, foul-mouthed bigot – and there are plenty of them as Twitter can attest – thinks: ‘If they use it, why can’t I?
’
They hear African-Americans say the N-word to each other and claim victory: ‘See, that’s what they even call themselves!’

It’s the twisted, horrible mind-set of the wretchedly ignorant.

Reaction, mostly but entirely negative, was swift. In one of a series of twitter response's to Morgan's column, John Legend (photo of him and Morgan, below, from Vibe) went sarcastic, remarking "ya'll better thank @piersmorgan for providing that simple, straightforward solution to racism. So brilliant.  why didn't we think of this???"  Perhaps because Morgan, maintaining "I just think it's the right thing to do," does not hold out the hope there would be some colossal benefit from avoiding the word. 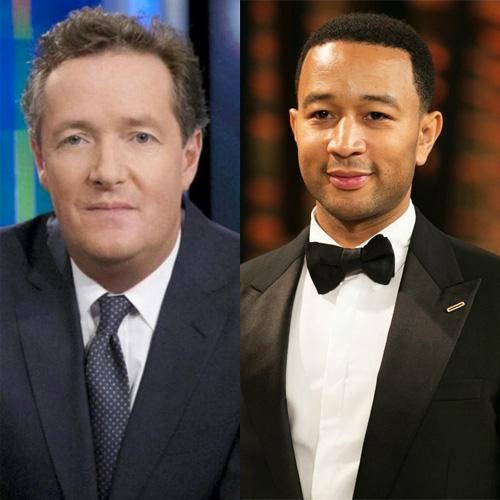 Exquistely sensitive Alternet Senior Editor Terrell J. Starr tweeted "If racism is what Piers Morgan wants to end, perhaps he needs to speak to WHITE PEOPLE and not us BLACK PEOPLE. We don't need his lecture."  Here is Starr's idea of a "lecture":  "As a white man, I have no right to demand that any black person gives up using the N-word.But as someone who believes passionately in civil rights, I just think it’s the right thing to do." Now that's intimidating!

To newly-credentialed anthropologist Ta-Nehisi Coates, "Banning 'nigger' means exempting black people from a basic rule of communication- that words take on a meaning from context and relationship."  So let's try this on:

Frustrated Georgetown law professor Paul Butler asked rhetorically "Is it too much to expect white people to understand there’s some things that they can’t do, that black people can do?"

Uh, yea, Paul, because that's called a double standard.  It's also placing the bar quite low for black people, lower than for other individuals, to suggest that blacks should not be expected to refrain from doing something as vile as Butler, Morgan, and most people believe it is. (This is what many folks refer to as the "soft bigotry of low expectations," but I never liked the phrase and evidence that Butler is bigoted is scant.)

It is true, as some of Morgan's critics noted, that whites will not completely stop using the n-word if and when blacks do. But it would eliminate one excuse, one which argues that if the people who most object to the term- and against whom it is brandished- use it, it must be just fine.

And it would reduce, substantially or otherwise, use of the term by non-blacks, for most of whom it would eliminate what little respectability it has. Presumably, Piers Morgan's critics would be pleased. Presumably.