"He's Crazy For Cream Cheese." It Gets Even Funnier Than That.


The New Yorker has published an essay by Lena Dunham entitled "Dog or Jewish Boyfriend? A Quiz" with the introduction "Do the following statements refer to (a) my dog or (b) Jewish boyfriend?"

Read it and you may observe it is less anti-Semitic than inane, or equally anti-Semitic and inane. A testament to the Girls' star's inability to maintain a train of thought, the 35 statements range from the insignificant "His best friend is named Archie" to the highly significant ".... he expects to be waited on hand and foot by the women in his life, and anything less than that makes him whiny and distant," from the self-indulgent "I have more Instagram followers than he does" to the  pithy and humorous "He has an obsession with bellhops that is troubling to me."

As Dunham (photo by AP/Richard Shotwell) defender Anna Silman notes, Dunham has been severely criticized on Twitter and in a statement by the Anti-Defamation League for promoting anti-Jewish stereotypes.  Silman says that she herself is "a Jewish person," which evidently justifies her belief that the piece is not anti-Semitic and qualifies her to discern how Americans from coast-to-coast will interpret the actress' remarks.

Dunham herself identifies as "very culturally Jewish," meaning she.... what, anyway?  Certainly, that implies that she is not religious, hardly an earth-shattering revelation.  Whatever else it means is unknown, except that it does give her an opportunity to repeat stereotypes about Jewish males, propagate others, and hope she is defended by people comforted that she identifies as "culturally Jewish."

The phrase itself is a misnomer. As David Javerbaum speaking as God explains,  "Breaking news from Mt. Sinai. Judaism is a religion. The millions of allusions to me in every single text and commentary and ritual of the past 3,000 years probably should have been a giveaway."

(Religious/religion is, admittedly, a word shunned by most people these days. Evangelical Christians don't like to identify themselves in that manner, in part because they foolishly believe it implies adherence to ritual for the sake of ritual. The other folks don't like it because they think declaring themselves as non-religious will get them blackballed from the people who avoid describing themselves as religious. And so it goes.)

Silman's defense of Dunham turns on her argument that

making fun of one’s own people is a time-honored part of the Jewish comic tradition. Jewish comics often turn within their own culture for material — just look at Jon Stewart, Abbi Jacobson and Ilana Glazer, Larry David, Sarah Silverman, Jerry Seinfeld, and the many, many other comedians whose humor involves riffs on their own Jewishness (one has only to think about the classic Seinfeld episode, about the dentist who Jerry accuses of converting to Judaism “for the jokes”).

Indeed, much of humor in general relies on self-deprecation. The best comedy comes from a place of introspection, joking about oneself rather than joking about others. Jewish comics — Dunham included — are allowed to make jokes about being Jewish that non-Jews could never make, because they come from an intimate and specific understanding of their own culture.

But Silman is not alone in her disingenousness or to be charitable, failure to comprehend. New Yorker editor-in-chief David Remnick stated to Mediaite

The Jewish-comic tradition is rich with the mockery of, and playing with, stereotypes. Anyone who has ever heard Lenny Bruce or Larry David or Sarah Silverman or who has read ‘Portnoy’s Complaint’ knows that. Lena Dunham, who is Jewish and hugely talented, is a comic voice working in that vein. Richard Pryor and Chris Rock do the same about black stereotypes; Amy Schumer does it with women and gender. I don’t mind if one reader or another didn’t find the piece funny. People can differ on that. But considering all the real hatred and tragedy in the world, the people getting exercised about the so-called anti-Semitism of this comic piece, like those who railed at Philip Roth a generation or two ago, are, with respect, howling in the wrong direction.

Dunham, who has one Jewish and one Protestant parent, at least has recognized that characterizing herself as "very culturally Jewish" is "the biggest cliche for a Jewish woman to say."  Javerbaum asks "Canst thou imagine being introduced to a 'cultural Christian' or a 'cultural Muslim'?"    But insofar as Dunham is Jewish, reinforcing stereotypes encourages acceptance of those stereotypes by individuals not as culturally sophisticated as Silman, Remnick, and their colleagues. Not everyone is in on the joke.

Nonetheless, Lena Dunham need not be terribly worried that her boyfriend is Jewish, or a dog, or whatever. Of more pressing concern ought to be "When I go out of town on a business trip, he sleeps with a pair of my underwear." 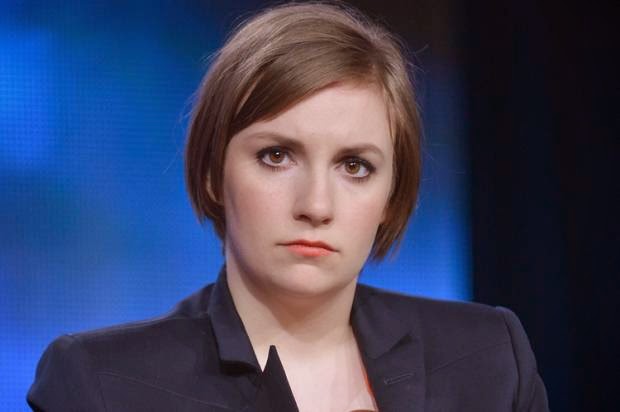