Slut Is Not A Racial Term


It's a typical weekday at Salon and already there are eleven posts and at least, Digby's takedown of faux country music fan Ted Cruz, which is spectacular. Another, however, is spectacularly wrongheaded.

You probably remember Philadelphian Mo'ne Davis, the remarkable 13 or 14-year old who was a star pitcher at last year's Little League World Series.  She is back in the news, and not only because The Disney Channel is making a movie about her experience.  Bloomsburg (Pa.) University first baseman Joey Casselberry on Friday night tweeted (emphasis his) "Disney is making a movie about Mo'ne Davis? WHAT A JOKE? That slut got rocked by Nevada."  (Castleberry promptly apologized and Davis has sent to the University a letter generously recommending he be reinstated.)

"It goes without saying," Brittney Cooper notes, "that she’s a better person than Casselberry. But she should not have to be" because

For starters, he meant what he said. One doesn’t slip up and mistakenly call a young teen girl a slut. Second, it bothers me that she sounds almost apologetic about how much others have to see her on television. Girls in our culture are taught that they should never take up too much space, that they should be seen (and look real pretty), but not heard. And Black girls in our culture are damn near invisible, whether in regards to their triumphs or their struggles.

Lest we think this inappropriate sexual shaming of Black girls is an isolated incident, let us not forget that in 2013, The Onion “jokingly” referred to then 9-year old actress Quvenzhané Wallis, as a “c*nt” in reference to her Oscar nomination that year for Beasts of the Southern Wild.

Cooper ought to have indicated something, anything, in the student's tweet indicating that he was thinking about race in any manner- or that he would not have tweeted the same had she been of any other ethnicity.  Though girls for too long were "taught that they should never take up too much space, that they should be seen (and look real pretty) but not heard," most of that thankfully has passed. That is particularly true in the university culture (fraternities aside), in which Casselberry studies (and until recently, played baseball).

But it gets worse. Cooper continues

Such language is nothing short of vile and reprehensible. And it raises the question of why young white people have such a prurient fascination with young Black girls? Mo’ne Davis is 13. Quevenzhané Wallis is 11. One is a baseball player. The other is an actress. Why are they being characterized in sexual terms at any level?

The fact that Black girl artists and athletes are understood only in terms of a sexuality that they may not even have begun to articulate for themselves should concern us. That their sexuality is already being publicly circumscribed by white men (and the anonymous Onion tweeter) in dirty and shameful terms is appalling.

The reason "young white people have such a prurient fascination with young Black girls" is that young males have a prurient interest with young girls.  They do tend to have great sexual interest- usually in the opposite sex- and generally with young females rather than old females.  (Were young men routinely interested in old women, that would be a different story... and probably a more interesting one.)   It is also hard to believe, for nearly everyone but Cooper, that young black males have significantly less interest in black girls than do young white males.

Davis is several years younger than Casselberry (photo below of both from Clem Murray of philly.com). Contrary to Cooper's implication, he probably was not sexually aroused by Davis, but rather using an offensive, sexist term promiscuously (okay- indiscriminately).  I don't know; Cooper hasn't asked, her mind having already been made up.

Brittney Cooper's assumption that the first baseman's loathsome tweet is due to "racialized sexism" or "sexualized racism" is nearly as rash as the tweet itself,. But it is not out of character, given that jumping to conclusions, rushing to ascribe racial motives uncritically, is not unusual for her. As a writer, she is entitled to bizarre leaps of logic.  However, Cooper also teaches Women's and Gender Studies and Africana Studies at Rutgers University in New Jersey, a situation New Jersey's state university would be wise to contemplate. 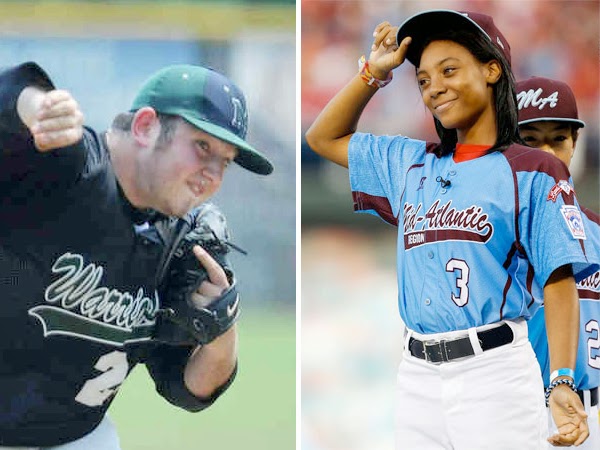