The Man Who Won't Go Away

Dick Cheney likes lattes. Seated in his favorite brown-leather chair in the sunlit study of his home in McLean, Virginia, the former vice president of the United States can toss back two of the warm java blasts in an hour. They come from a stainless-steel machine in the kitchen and a slender, mustachioed housekeeper named Gus, who serves them in custom-ordered white Starbucks cups outfitted with cardboard Starbucks sleeves.

Digby comments "Why would anyone want to pretend they're drinking Starbucks when they're drinking a latte made in their own kitchen?"  Personally, I wonder why Dick needs a pool boy to serve the lattes. In either case, Digby is right to conclude "should be fun."

And the fun begins almost immediately, when the former vice-president contends

I think with respect to the situation in Iraq, his precipitous withdrawal and refusal to leave any stay-behind forces, to negotiate a Status of Forces Agreement with the Iraqis, was a huge mistake; we are paying a price for it now....

I don’t think he ever bought into the notion that we’re at war, in terms of a war on terrorism; I think he always wanted to treat it as a law-enforcement problem.

Those drone strikes in Pakistan, Yemen, and Somalia must be the President's version of the Miranda warning.  Admittedly, President Obama did not sign a Status of Forces Agreement with Baghdad. But George W. Bush did- and it required all USA soldiers to be out of Iraq by December 31, 2011. In the press conference announcing the pact, President Bush maintained it

provides American troops and Defense Department officials with authorizations and protections to continue supporting Iraq's democracy once the U.N. mandate expires at the end of this year. This agreement respects the sovereignty and the authority of Iraq's democracy. The agreement lays out a framework for the withdrawal of American forces in Iraq -- a withdrawal that is possible because of the success of the surge.

Bush imagined that in the withdrawal it would lead to, "we are leaving the next President with a stable foundation for the future, and an approach that can enjoy broad bipartisan support at home."

Declaring victory in a war- or success of a surge- does not make it so.  The Obama Administration balked at signing its own agreement because American soldiers were specifically denied legal immunity by the Iraqi government.

Cheney follows the Iraq myth with another myth, referring to Obama's "apology tour, when he went to Cairo in the summer of 2009."  When Mitt Romney attacked Obama during campaign '08, it wasn't true, as CNN's Fact Check, factcheck.org, and Politifact all concluded. It is no more true now, and restating a myth doesn't make it any more accurate.

During this imagined apology tour, President Obama- according to Cheney- "said the U.S. overreacted to the events of 9/11."  Bush's V.P., Charles Krauthammer, and others believe the USA did not overreact to the events of 9/11. But that does not make it so, and we don't have to consider the debacle of the Iraq War and the upsurge in terrorist activity it spurred to know we overreacted.

Cheney himself should know best. After the terrorist attacks on the Twin Towers and the Pentagon, he camped out for weeks a few miles north of Camp David at what has become known in American lore as the "undisclosed location." It is nothing of the sort, but rather in a complex of buildings ("Site R") inside Raven Rock Mountain Complex at Raven Rock Military Reservation in Liberty Township, Adams County (near Blue Ridge Summit in Franklin County, Pa.) in south-central Pennsylvania, a few miles north of Camp David, Maryland (location below).  Yet, the Vice-President's location was strictly confidential at the time because... well, because we surely did not overreact to the events of 9/11. 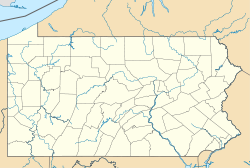 I came to town in 1968, and I have never seen people I have known in some cases for a quarter of a century—foreign leaders, especially in the Middle East—who are so terribly frustrated, angry, frightened. “Whatever happened to the United States?” There’s a conviction they can’t count on us, that our word doesn’t mean anything.

So says the man who asserted Sadaam Hussein has "reconstituted nuclear weapons;" that, though we knew otherwise, 9/11 hijacker Mohammed Atta had met with an Iraqi spy in Prague; and that American forces "will be greeted as liberators" by Iraqis.

On a positive note, Dick Cheney has remained consistent, weaving the same old fabrications into a narrative that long ago was proven false.