The major problem faithfully conservative Leon H. Wolf of Red State sees with the Republican Party is that it too often makes common cause with Democrats. However, he knows his crime and punishment. On Sunday, he slammed "a particularly stupid bill that is being pushed by Texas State Rep. Jason Villalba which would, in essence, make it illegal for any person (other than media) to film cops while they are performing their duties from a distance of less than 25 feet (or 100 feet if you are legally carrying a concealed weapon, for some reason."

On Monday Wolf- who claims to have read all 102 pages of the Department of Justice report on the Ferguson (MO.) Police Department- wrote

The reflexive defense of the FPD by conservatives tends to come from two sources: the first is the belief among many conservatives that Officer Darren Wilson was telling the truth and that the witnesses and friends of Michael Brown were lying – and thus by extension, the DOJ is perceived to be taking the “Michael Brown side” and therefore is not credible. However, this particular source of distrust makes no sense as the DOJ likewise did not charge Officer Wilson in connection with the Michael Brown shooting. Thus, insofar as the credibility of a person is judged by whether they believe the spurious “hands up, don’t shoot” narrative, the DOJ comes down on the side of conservatives.

The second is the belief that the FPD was unfairly targeted by the DOJ as retribution for the fact that Officer Wilson was not indicted by the local authorities. Many conservatives I have spoken to are of the opinion that the FPD is no worse than any other police department and that they oppose the FPD being targeted simply because of the Michael Brown incident. I suppose this is probably true, but what I don’t understand is why that is seen as a feature, not a bug.

Wolf is "singularly unimpressed" by conservatives who reflexively distrust the investigation conducted by the DOJ because the department is headed by Eric Holder.  He also recognizes that, as the report indicates, blacks are disproportionately disadvantaged by practices of the Ferguson Police Department. But he seems also to realize that  most of the problems are not generated by racism or due to race per se, as when he acknowledges

One of the more infuriating sections of the report proves – again, through documentary evidence collected from the FPD – that the FPD and Municipal Court employees and clerks regularly and systematically intervene in the judicial process to have tickets and citations for their friends dismissed. Because the Ferguson PD is almost entirely white, and the Municipal Court employees are 100% white, this means as a matter of practicality that most of their friends are probably white, and this is seen in the fact that if you are white and live in Ferguson, you have over a 30% chance of getting a ticket “dismissed” through knowing somebody whereas if you are black your chances are virtually zero.

The problems go far beyond the issue of race, which is among the reasons few lessons from the investigation will be sufficiently learned. Wolf explains

If you read nothing else in the report, flip to page nine, roman numeral 3, and read that section. The results of this tremendous top-down pressure are astounding. Between the years of 2010 and 2014, revenues from fines and fees assessed by the Ferguson PD almost tripled, from $1.38M to over $3.0M. As a consequence, the portion of the city’s budget that was comprised by revenue from these fines increased from about 10% to about 25%. Each year the city has budgeted for these increases and clearly ordered the FPD to get them at any cost.

Ferguson has no system in place to determine ability-to-pay with respect to municipal fines and offers no community service alternative for those who are unable to pay. As a result, the Ferguson municipal court and police system operates functionally as a debtor’s prison. Inability to pay fines, or missing a single payment on a payment plan, results in the immediate issuance of an arrest warrant – the crippling effects of which are seen in the sheer volume of these warrants that are issued.

Recognition of fines and penalties as a system of revenue enhancement is not the only structural problem Wolf picks up in the DOJ report. which, he finds

describes the misuse and abuse of several municipal code sections that are blatantly facially overbroad under the constitution and serve no purpose other than to allow cops to arrest and fine the citizens of Ferguson for offenses that can only be described as “contempt of cop” violations. The DOJ brief is replete with instances of dozens of citations and arrests for violations of the City’s “Failure to Obey,” “Failure to Comply,” “Manner of Walking,” and “Resisting Arrest,” where, even according to the charging document, the charged conduct can only be described as making a police officer irritated. Numerous instances were recounted where citizens were arrested for “Failure to Obey” or “Failure to Comply” where the described order was facially illegal or in excess of legitimate police authority.

Thus it is that such problems, Wolf notes, "have their root in the first matter highlighted above- that many municipal police departments face increasing and unrelenting pressure from city hall to fill increasingly wide gaps in revenue with money from fines and citations."  Unfortunately, as a conservative he will not acknowledge that this emanates originally from this nation's tax phobia, a reality liberals, prone to attribute most things nefarious to race, are nearly as blind to.

Budget-based ordinances will not be re-examined in many municipalities, nor contempt of cop curtailed in many jurisdictions in a nation in which law enforcement personnel are increasingly put on a pedestal (Robert Cohen/St. Louis Post-Dispatch/AP photo).   Cory Booker, Rand Paul, Mike Lee, and other politicians elevating their profile by addressing the penal system will look elsewhere and leave sacred cows unscathed. 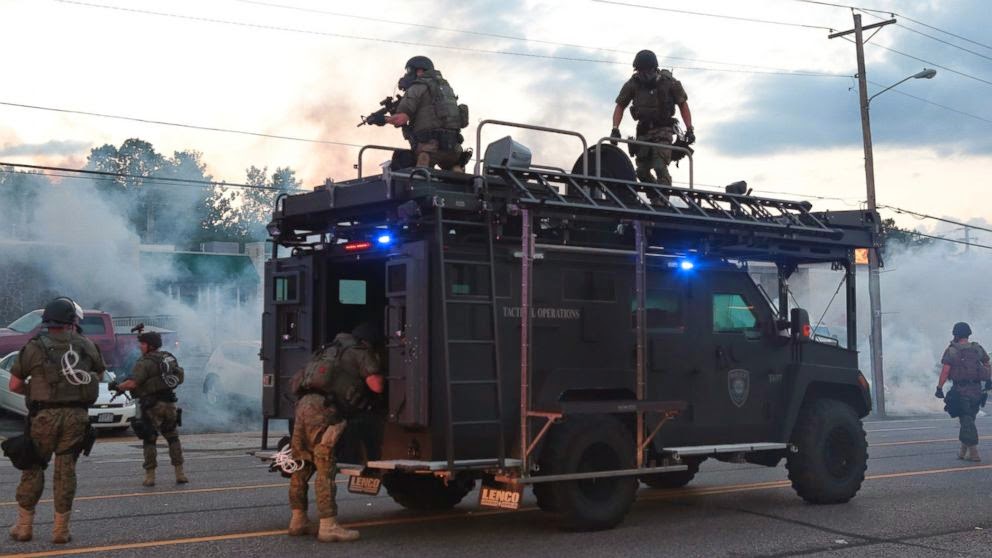