Israeli Prime Minister Benjamin Netanyahu said Wednesday his speech to the U.S. Congress offered a "practical alternative" to a possible Iranian nuclear deal, while opinion polls showed his party received a slight bump following his address ahead of the country's March 17 election.

U.S. President Barack Obama said the Israeli leader had offered no viable alternative to preventing Iran from getting nuclear weapons, saying "there was nothing new" in Netanyahu's speech Tuesday.

In a statement released after he landed in Israel, Netanyahu said the alternative deal he presented in Congress would make it harder for Iran to build a nuclear bomb.

"I proposed a practical alternative that through tougher restrictions would extend the breakout time, by years, that it would take Iran to reach a nuclear weapon if it decides to breach the agreement," he said.

Netanyahu (photo from AP/Susan Walsh) argued that the current restrictions should not be lifted until the world demands "that Iran do three things. First, stop its aggression against its neighbors in the Middle East. Second, stop supporting terrorism around the world. And third, stop threatening to annihilate my country, Israel, the one and only Jewish state." 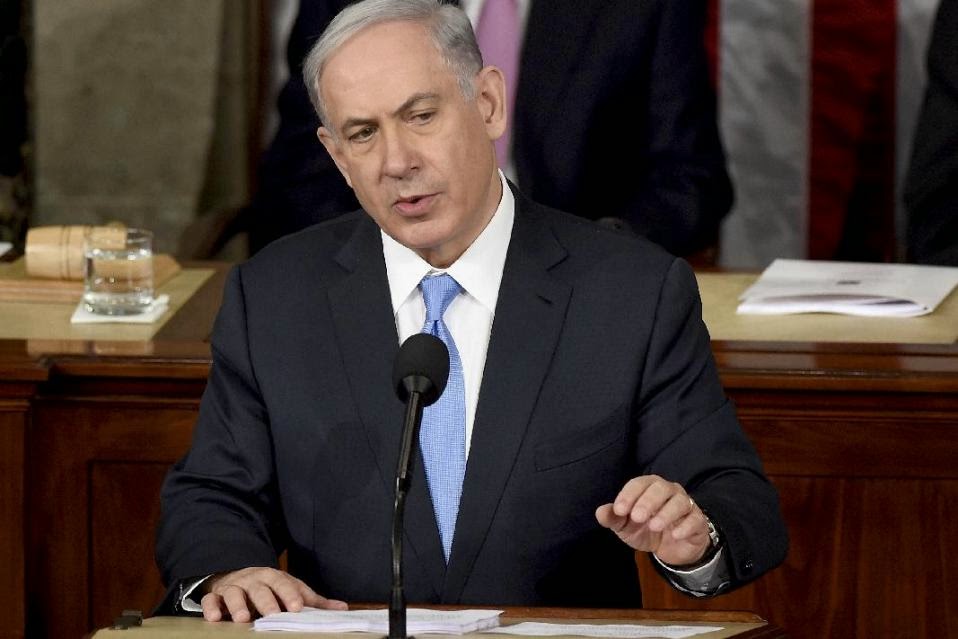 It is, he might have added, the one and only democratic state in the region, but far be it for me to tell a fellow who got 23 standing ovations how to frame an applause line.

The Prime Minister demanded not one, not two, but three things be accomplished before the current restrictions are lifted.  If the USA is going to implement sanctions against any Arab or Persian country  which does not stop aggression, support terrorism, or threaten to annihilate Israel, we're going to have a rather wide-ranging sanctions regime. We can begin with Saudi Arabia, which formerly funded Hamas and ISIL. These are not nations with good intentions.

The AP noted also "He said he received 'very encouraging" responses from Democrats and Republicans to his speech."

If indeed the Prime Minister heard "very encouraging' responses from Democrats, they may have been blowing smoke up his posterior, given that chances for veto-proof passage by Congress of a sanctions bill appear to have declined as a result of the speech. However, the opinion polls back home do show an improvement, however slight, for Likud.

Mission accomplished. Electoral victory is susceptible to major influence by the Prime Minister. The reaction of Iran to an increase in sanctions is not, though it is likely it would break off negotiations and ramp up its effort to produce a nuclear weapon.      As Mother Jones' David Corn points out, "if the past 12 years are any guide, unintended consequences are the norm when it comes to war and policy in the Middle East."

Correction: In a rather stupid mistake, my previous post contained quotes from a Netanyahu speech and a link to it. Unfortunately, that was the speech the Prime Minister delivered in Israel before embarking to the USA. The error is regretted or, as public officials are wont to put it, "I apologize if you misinterpreted anything I said and it offended you."