In the course of slapping American policy toward Iran, Israeli Prime Minister Benjamin Netanyahu made a valid point when he noted

As Assad drops bell bombs on his own people, Israeli doctors treat his victims in our hospitals right across the fence in the Golan Heights.

As women in the region are repressed, enslaved, and raped, women in Israel serve as chief justices, CEOs, fighter pilots, two women chief justices in a row.Well, not in a row, but in succession. That’s pretty good.

Two "not in a row, but in succession"- even the grammar was impeccable, unsurprising from someone who went to high school in the greater Philadelphia, Pa. area.

Still, the Miami Herald's Jim Morin succinctly and exquisitely captures the essence of the Netanyahu visit: 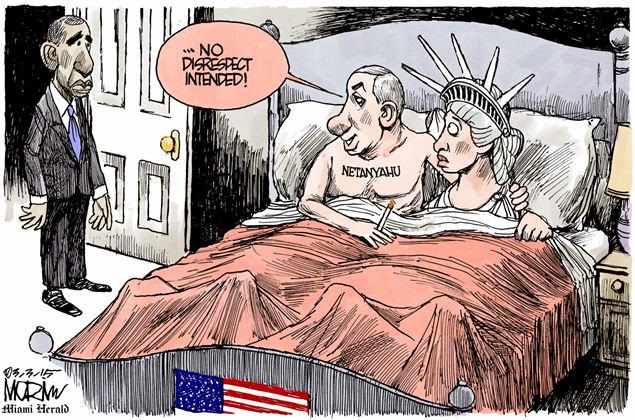 No disrespect, indeed.  Netanyahu spoke before a joint session of Congress, as American presidents do, in an effort to derail any deal between the administration of this president and Tehran, and from the same rostrum as presidents do. There, he gave a shout-out to Ron Dermer, Israel's ambassador to the USA, as "a man who knows how to take the heat," stating "I couldn't be prouder to have you representing Israel in Washington." (By contrast, he commended US Ambassador to Israel Dan Shapiro for "the great job you’re doing representing the United States and the State of Israel." The US and Israel?)

Yet, Netanyahu has an election to win and calculates that pressing Israel's interests (as he sees them) in such an august setting in the capital of Israel's most powerful and steadfast ally is likely to help him squeeze through.

John Boehner and his merry band of obstructionists, however, have no such excuse.Notwithstanding Netanyahu's strategic gamble and  the ironic phrase coming from the Israeli prime minister in Morin's cartoon, this nearly unprecedented event was driven not by Bibi but by House Repubs.  Tuesday afternoon, Vox's Zack Beauchamp explained

On January 8, House Speaker John Boehner and Senate Majority Leader Mitch McConnell reached out to Ron Dermer, Israel's Ambassador to the US (and a former Republican operative), to discuss having Netanyahu speak in Congress. The Israelis and Republicans worked out the details of the event without notifying the White House, to "make sure," in Boehner's words, "that there was no interference" from the administration.

That process went on for two weeks. The afternoon of January 20, Boehner's office "informed Ambassador Dermer of our intent to issue the invitation." Dermer "accepted and acknowledged [their] intent to do so."

Sometime between then and the morning of January 21, the Speaker's office told the Obama administration of the plan. That morning, Boehner issued a formal invitation to Netanyahu. The Prime Minister accepted, and here we are.

The details of the timing are important. Dermer knew about the invitation before Obama did, and, according to Boehner's office, accepted that the invitation was coming. But Netanyahu did not formally accept until after the White House had been informed.

Evidently, this was largely a deal between the Speaker of the GOP House and Dermer, who

was widely seen in Israel as having steered Netanyahu toward showing almost overt support for Republican candidate Mitt Romney in his failed 2012 electoral bid to unseat President Barack Obama, with whom Netanyahu had had frosty ties.

Israeli media reported that Dermer, though officially welcomed by the Obama administration, had had ties with the U.S. leader’s Republican rivals.

During the campaign for the November election, Netanyahu had a high-profile meeting with Romney when he visited Israel, in contrast with past Israeli practice of avoiding publicity that may be seen as expressing support for any U.S. candidate.

The Haaretz newspaper wrote on its website that Dermer was seen as a “clear supporter of the Republican party”, whose family has had close ties with the party. State-owned Channel One television said he was seen as someone who supported Romney.

Admittedly, Bibi Netanyahu was, and is, more than a pawn.  Nonetheless, this whole escapade has been a political gambit spawned by two GOP heavy hitters (approved by the P.M.)  more interested in political advantage than in heading off acquisition of a nuclear weapon by Iran.  In approximately two weeks Israeli voters will have an opportunity to prove they won't be played.