As Radical As Eisenhower, Kennedy, Johnson

It was entirely predictable that Politico has joined the chorus of voices, some of them emanating from the Hillary Clinton camp, denigrating Bernie Sanders.  Ben Shreckinger and Jonathan Topaz set the tone as they write

Democratic primaries have always featured liberal insurgent candidates, but perhaps none quite so liberal or insurgent as the socialist senator from Vermont. Sanders’ comments are a reminder of just how far the second-place Democratic presidential candidate stands from the American mainstream on some issues, and the looming reckoning Democrats face.

many of his most important positions today fall well outside the traditional parameters that have bounded American political discourse in recent decades. He wants to raise the marginal tax rate for top earners to more than 50 percent — which would be the highest rate in 30 years and is more than 10 points higher than Barack Obama proposed as a candidate in 2007. He says he would replace the Affordable Care Act — perhaps Obama’s signature accomplishment in office and a prized victory for Democrats — with a Medicare-for-all, single-payer system, a position that was too liberal for Dean when he was governor of Vermont. (Sanders’ standard Obamacare line is to quickly laud its “modest gains” but quickly say it isn’t enough.)

Inform Politico: the last few decades have not been all sweetness and light for the American middle class. In 2013, The New York Times' Steven Greenhouse wrote

Wages have fallen to a record low as a share of America’s gross domestic product. Until 1975, wages nearly always accounted for more than 50 percent of the nation’s G.D.P., but last year wages fell to a record low of 43.5 percent. Since 2001, when the wage share was 49 percent, there has been a steep slide.

“We went almost a century where the labor share was pretty stable and we shared prosperity,” says Lawrence Katz, a labor economist at Harvard. “What we’re seeing now is very disquieting.” For the great bulk of workers, labor’s shrinking share is even worse than the statistics show, when one considers that a sizable — and growing — chunk of overall wages goes to the top 1 percent: senior corporate executives, Wall Street professionals, Hollywood stars, pop singers and professional athletes. The share of wages going to the top 1 percent climbed to 12.9 percent in 2010, from 7.3 percent in 1979.

Greenhouse attempted to be fair and balanced, noting "Some economists say it is wrong to look at just wages because other aspects of employee compensation, notably health care costs, have risen."

overall employee compensation — including health and retirement benefits — has also slipped badly, falling to its lowest share of national income in more than 50 years while corporate profits have climbed to their highest share over that time....

From 1973 to 2011, worker productivity grew 80 percent, while median hourly compensation, after inflation, grew by just one-eighth that amount, according to the Economic Policy Institute, a liberal research group. And since 2000, productivity has risen 23 percent while real hourly pay has essentially stagnated.

It is true that Sanders wants to raise the rate on highest earners (chart below from National Taxpayers Union) to its lowest level in 30 years. Although  in 1981 it was 70%  before President Reagan embarked on his program to degrade, humiliate, and impoverish American workers, by 1987 it was down to 38.5%.  But it had been even higher in the early 1960s which, as Business Insider's Henry Blodget has noted, "was one of the most successful eras in US economic history. The middle class boomed, the economy boomed, and the stock market boomed. And all with the top marginal income tax rate over 90%."

Once that era ended

In 2003, the top bracket dropped to 35%. The deficit reappeared--and then soared. And, interestingly, we saw a repeat of the 1920s: An unsustainable economic boom that ultimately collapsed, followed by a massive recession and huge deficits. And soaring inequality, which still plagues us today. 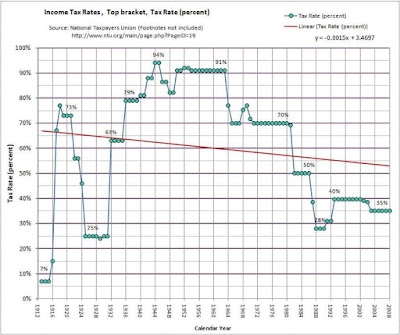 Bernie Sanders is "well outside the traditional parameters," Politico argues of the man who has observed "If the minimum wage had kept pace with productivity, it would be more than $16 per hour today. "  Fun fact, according to Mother Jones (its chart, below): "if the median household income had kept pace with the economy since 1970, it would now be nearly $92,000, not $50,000." 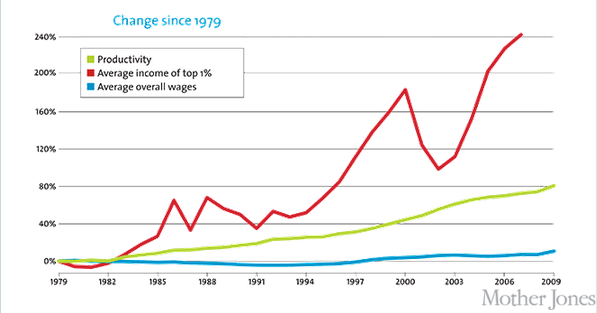 
next up: and as for that healthcare legacy....