Kristol Certainly Knows A 'Crazy' When He Sees One

The reviews have come in on Donald Trump's statement that John McCain is "a war hero because he was captured. I like people that weren't captured.

The responses have not been positive. John Ellis Bush termed Trump's remarks "slanderous attacks." Scott Walker called McCain "undoubtedly an American hero" and argued Trump "needs to apologize to Senator McCain" for this "disgrace." Marco Rubio asserted "America's POW's deserve much better to have their service questioned by the offensive rantings of Donald Trump."

Rick Perry claimed Trump has shown himself "unfit" to be Commander-in-Chief of the U.S. armed forces," as if there ever were reason to believe he was fit.  However, the most clever (though probably not prescient) remark came from Mitt Romney, who declared "the difference" between McCain and his critic is "Trump shot himself down."

In a sense, though, the most interesting remark was made by Bill Kristol, who stated on ABC's "This Week"

So I'm finished with Donald Trump. And I don’t think it's going to -- he'll -- and I don't think -- I don't think he'll stay up in the polls, incidentally. Republican primary voters are pro-respect the military. And he showed disrespect for the military.

He showed a lack of respect for war heroes (not for "the military") but, as John Kerry discovered and Jake Tapper pointed out (video below), the GOP's respect for the men and women in uniform is selective.  We will find, also (though it will not be acknowledged) that support for Trump does not plunge because he slammed a guy for having failed to succeed. McCain's service was heroic; but he was captured, and that's a far cry from Republican idolization of the "winners" in society. "I don't like losers" Trump said, but that really captures the ethos of his entire Party.

Kristol played a prominent role in the 2008 presidential campaign, for he and two other National Review heavyweights (with some family members) took a cruise to the governor's mansion in Juneau. After a pleasant visit to the state's chief executive

The most ardent promoter, however, was Kristol, and his enthusiasm became the talk of Alaska’s political circles. According to Simpson, Senator Stevens told her that “Kristol was really pushing Palin” in Washington before McCain picked her. Indeed, as early as June 29th, two months before McCain chose her, Kristol predicted on “Fox News Sunday” that “McCain’s going to put Sarah Palin, the governor of Alaska, on the ticket.” He described her as “fantastic,” saying that she could go one-on-one against Obama in basketball, and possibly siphon off Hillary Clinton’s supporters. He pointed out that she was a “mother of five” and a reformer. “Go for the gold here with Sarah Palin,” he said. The moderator, Chris Wallace, finally had to ask Kristol, “Can we please get off Sarah Palin?"

The next day, however, Kristol was still talking about Palin on Fox. “She could be both an effective Vice-Presidential candidate and an effective President,” he said. “She’s young, energetic.” On a subsequent “Fox News Sunday,” Kristol again pushed Palin when asked whom McCain should pick: “Sarah Palin, whom I’ve only met once but I was awfully impressed by—a genuine reformer, defeated the establishment up there. It would be pretty wild to pick a young female Alaska governor, and I think, you know, McCain might as well go for it.” On July 22nd, again on Fox, Kristol referred to Palin as “my heartthrob.” He declared, “I don’t know if I can make it through the next three months without her on the ticket.” Reached last week, Kristol pointed out that just before McCain picked Palin he had ratcheted back his campaign a little; though he continued to tout her, he also wrote a Times column promoting Senator Joe Lieberman, of Connecticut.

On Sunday, Kristol contended Trump "jumped the shark yesterday."   But when a great war hero and veteran United States Senator- in part due to Kristol's prodding- selects Sarah Palin (!) to be a heartbeat from the presidency (cartoon below by M. Wuerker of Politico), that could not possibly be jumping any fish..

Donald Trump was very rude. But so was Barack Obama. He did not, after the election of 2008, bother to send a thank-you note to William Kristol. 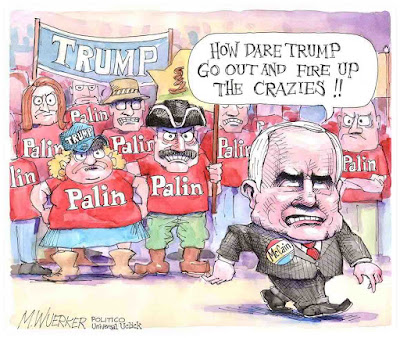