A CNN/ORC poll conducted by phone June 26-28 has found that for the first time in two years at least half of all Americans approve of the job Barack Obama has been doing as president. This followed a week in which, Will Bunch summarizes,

The Supreme Court sided with the progressive argument on three major issues of great import: Legalizing same-sex marriage in all 50 states, saving Obamacare and inoculating health-care reform against future challenges, and upholding the broad liberal interpretation of the Fair Housing Act of 1968. President Obama, who basked in the glow of the Supreme Court victories, had another big win, getting congressional approval to negotiate in secret yet another free trade pact, this time with the Pacific Rim. In response to a horrific act of violence in Charleston, S.C., governors and other key politicos in the Solid South are starting the much-belated process of lowering a Confederate flag that had become a beacon to hate groups.

But he checks his enthusiasm, noting

Whoa, whoa, whoa...what was that middle one again? Not every win for President Obama is a victory for a progressive agenda, no matter what they say on Fox News. The trade deal -- the Trans-Pacific Partnership, or TPP -- will be negotiated in secret by the Obama administration under the guidance of the same folks who pushed through two decades of so-called "free trade" that have decimated the American labor force, on terms that have been great for large multi-national corporations but have been terrible for the average blue-collar workers (not to mention the environment. The administration line on TPP is basically, "Trust us, this one is going to be different" -- but most everyday folks on the left and on the right don't trust them. It's the elected politicians of both parties, flush with corporate donations, who pushed the TPP, through.

Perhaps the President, as Charlie Pierce put it, "simply hasn't recognized the concept of lame-duckery," for once the week was over, word came down that he would give roughly five million workers a raise by extending overtime protections to full-time workers earning up to $50,400 annually.

But with Trade Promotion Authority approved, the specter of TTP, TTIP, and other trade agreements casts doubt on the future of the middle class. Now comes the announcement that the US Supreme Court in its next term will hear Friedrichs v. California Teachers Association  in which, Ian Millhiser explains, the primary issue is

“fair share service fees,” a fee that the unions at issue in this case charge to non-members in order to compensate the union for bargaining on those non-members’ behalf. Under well-established law, unions are required to bargain on behalf of every worker in a unionized shop, regardless of whether a specific worker elects to join the union. This means that union members and non-members share alike in the benefits of working for a unionized employer, and these benefits can be significant. According to one study, workers in unionized shops enjoy a wage premium of nearly 12 percent.

If workers were allowed to accept these higher wages without having to pay anything in return, however, that would create a free-rider problem — where workers would have no incentive to join the union because they benefit regardless of whether they are members. Eventually, the union would be starved for funds, and all the workers would lose the benefits they gain from being unionized.

To combat this problem, unions have historically charged fees — alternatively referred to as “fair share” fees or “agency fees” — to non-members in order to recoup the costs of bargaining on the non-members’ behalf. These costs can be significant, as collective bargaining often requires a sophisticated team of financial experts and lawyers who must be paid as professionals. Nevertheless, an individual worker’s share of these costs typically do not exceed the value of the higher wages and increased benefits they receive from collective bargaining. And if the union fails to strike a deal that increases workers’ take-home pay once the cost of agency fees are covered, the workers always have the opinion of voting not to be represented by the union.

Friedrichs, however, asks the Court to invalidate these agency fees — or, at least, to declare them optional — and permit non-members of a public sector union to gain many of the benefits of being in a union without having to pay for it. Should this case succeed, it would place enormous, potentially even crippling, financial pressure on public sector unions.

As unions decline, pressure on employers in non-union businesses and agencies to keep wages and benefits up to deter unionization will disintegrate. Income will be increasingly concentrated in the hands of the wealthy, as this 2013 graph (below) from Piketty and Saez suggests. 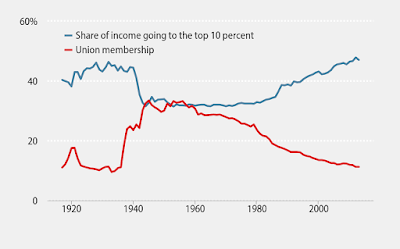 At the close of his dissenting opinion in the same-sex marriage case, Chief Justice Roberts told gay marriage supporters to "celebrate the achievement of a desired goal," as well as "the opportunity for a new expression of commitment to a partner (and) the availability of new benefits" but not the Constitution, for "it had nothing to do with it."

All that can be celebrated. But if the Court- presumably with the support of Justice Kennedy, the author of the majority opinion in the marriage case- declares agency fees optional, the 99% will have even less defense against the power of the 1%.  And no LGBT celebration or White House rainbow will change that.