They Meant No Harm, Nor Much Of Anything

Even after the narrative of a benign and honorable Confederacy fell out of favor with historians, it continued to dominate American popular culture in film and literature, from The Birth of a Nation to The Dukes of Hazzard. The damage wrought by this interpretation of history is immeasurable. It is only now unraveling.

The Birth of a Nation and The Dukes of Hazzard- perfect together?  Not quite. Premiering in 1915, according to this account

The Birth of a Nation is three hours of racist propaganda — starting with the Civil War and ending with the Ku Klux Klan riding in to save the South from black rule during the Reconstruction era.

"[Griffith] portrayed the emancipated slaves as heathens, as unworthy of being free, as uncivilized, as primarily concerned with passing laws so they could marry white women and prey on them," Dick Lehr, author of The Birth of a Nation: How a Legendary Filmmaker and a Crusading Editor Reignited America's Civil War, tells NPR's Arun Rath.

The movie was "a runaway hit" and for many years "much of the storyline was accepted as historically accurate."  But it reflected "the embedded, bigoted, racist state of mind of the time" and "immediately after the film's release the Ku Klux Klan experienced a surge in membership, and it continued to use the film as a recruiting tool for decades after that."

There is no evidence that the ranks of the KKK grew during, or following, the run of the series from 1979 to 1985. Nor is there indication of an upsurge in racism while Bo and Luke Duke were evading the evil machinations of (Sorrell Booke as) Sheriff Boss Hogg, who was assisted by bumbling Deputy Roscoe P. Coltrane (video, below; r.i.p,, Waylon).  A modest hit of its time, it would have been even less likely to have sociological impact telecast on TV Land, where nearly 39 people across the U.S.A. would have watched it regularly.

That reality lends no more credence- even less, actually- to the remarks of Ben Jones ("Cooter"), who believes the Dukes of Hazzard "represents the spirit and the good heart of America [because] it’s the most positive show in the history of television. Kids of all races love this. Why are they doing this? This is like the book burning in Nazi Germany!"

Any similarity between the fictional Hazzard County and the all-too-real Third Reich is purely coincidental, and non-existent.   Although amusing in its absurdity, the program was hardly "the most positive show in the history of television," or the most anything in the history of television.  It probably was not wildly popular among black, Hispanic, or Asian children.  To the best of my recollection, very few African-Americans ever appeared (and none portrayed negatively) and probably no Hispanics or Asians. It would have detracted from the story line.... and this was the rural south, after all.

That storyline was intended to be entertaining and to carry no redeeming social value, positive or negative, notwithstanding Jones' interpretation.    Comedian Joe Rogan notes "The Dukes Of Hazzard was about a lot more than just that s****y paint job on one of the most beautiful muscle cars the good lord ever inspired man to create, it was about tradition. That show started the tradition of the most iconic piece of clothing our nation ever produced; The Daisy Duke shorts."

The Dukes of Hazzard was about one-dimensional characters- Bo and Luke Duke, "just good ol' boys, never meaning no harm;" the brilliantly played Boss Hogg and his Deputy; and the gorgeous, always scantily-dressed Barbara Bach (then and in 2013, below).  It was hard to take very seriously unless one were a young, rural male from certain parts of the country. with a crush on hot cars. 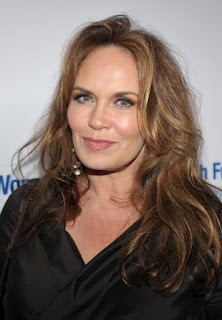 Ben Jones says the show was cancelled because of "sanctimonious left-wing special interests in New York and elsewhere." The Dukes of Hazzard was not The Birth of a Nation nor the cultural benchmark some cultural historians and Jones believe it was. Further, those sanctimonious special interests at Viacom probably were less motivated by politics or a passion for racial justice than the possibility of a backlash, which would hurt its image, thus its bottom line. (On a positive note, there was no reference to "Jewish left-wing special interests in New York." )

And still, we hear little about guns.