Whoa! This is not good timing. On Tuesday, Guns & Ammo gushed "In 2014, Alabama residents voted overwhelmingly to adopt ballot initiatives to strengthen the right to keep and bear arms in the state as well as affirm the right to hunt.... Obtaining a CCW permit is quick and easy and does not require training."

The gun John Russel Houser used Thursday evening to shoot eleven innocents in a movie theater in Lafayette, Louisiana was a Hi-Point .40 caliber semiautomatic pistol which he bought legally in February 2014 from a pawn shop in Phenix City, Alabama.   Houser proceeded to take his own life, odd given as NRA Director Wayne LaPierre has put it, "The only thing that stops a bad guy with a gun is a good guy with a gun."  Perhaps, in the NRA's eyes, Houser was one of the good guys (photo from Ethan Miller/Getty Images, from shooting death in Las Vegas in June, 2014). 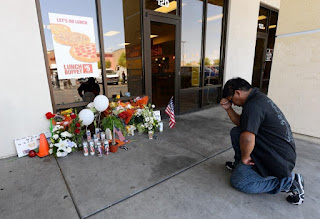 It wasn't so odd, though, that the killer purchased his weapon in Alabama, given that according to Mayors Against Illegal Guns, Alabama was in 2009 fifth in rate of gun exports, guns purchased in that state recovered after being used in a crime in another state.

Louisiana itself, however, is no slouch.   A state with arguably the most lax gun laws in the nation, Louisiana in 2010 ranked second in per capita gun deaths and in 2013 was the fifth most violent state in the union.

Still, blaming any one, or two, states for a murderous attack or rampage is a little like blaming a particular blizzard or hurricane on climate change. There probably is an association, but can't be proven at the current rate of scientific knowledge.

We do know, however, that proliferation of firearms in a state increases total murders in that state, just as we know America's gun culture predisposes it to a higher rate of violence than virtually any other industrialized nation.  That helped prompt President Obama Friday to acknowledge

You mentioned the issue of guns, that is an area where if you ask me where has been the one area where I feel that I've been most frustrated and most stymied it is the fact that the United States of America is the one advanced nation on earth in which we do not have sufficient common-sense, gun-safety laws. Even in the face of repeated mass killings.

Even in the face of repeated mass killings.    It's not as if  we're completely incapable of responding to mass killings.  After Dylann Roof murdered nine individuals in an African Methodist Episcopal church in South Carolina, South Carolina removed the Confederate flag from the Capitol grounds, Mississippi is seriously considering removing the Confederate battle cross from its state flag, Tennessee may move from its State House a bust of a confederate general and early KKK leader, and five other states are examining their own flag.

But still we do nothing about guns and, unlike in years past, there is even little effort expended to debate firearm proliferation. With the lack of talk about guns, it almost seemed as if eleven people were bludgeoned to death in Charleston by a flag, for all the talk about guns. When the flag came down, liberals cheered, media gushed, and conservatives were accepting. State officials had done as they must, politically and ethically, so as not to continue giving offense, without ever conceding the flag was an emblem of treason.  The NRA celebrated- or would have, if it still believed death by gun, over and over, threatened its agenda.

It goes on an on and on.  So Guns and Ammo is guilty of terrible timing.... except that it doesn't matter anymore.