Big things are happening in criminal justice, and Philadelphia, Pa. is not being left out.  On Wednesday, Slate's Leon Neyfakh wrote

President Obama just gave a major speech calling for criminal justice reform. The speech presented an expansive yet detailed argument not only for reducing the number of people serving time in prison, but for changing the way prison time is spent so that individuals return to society better-equipped to succeed.

The speech, delivered in Philadelphia at the annual conference of the NAACP, comes one day after the president commuted the sentences of 46 nonviolent drug offenders serving time in federal prison, and one day before a scheduled visit to a federal prison in Oklahoma.

The speech was wide-ranging—Obam asaid he wanted to talk about proposals “in the community, in the courtroom, and in the cellblock”—but was built upon a basic thesis, that the American criminal justice system “is not as fair as it should be,” and that “while the people in our prisons have made some mistakes, and sometimes big mistakes, they are also Americans.”

“Mass incarceration makes our country worse off,” Obama said, “and we need to do something about it.”

As New York City prepares to do away with cash bail for thousands of low-level offenders charged with nonviolent crimes, Jim Kenney is weighing a bail proposal for Philadelphia, part of a broader plan to address the city's overcrowded prisons in the event that he wins the mayor's office this fall.

Kenney's campaign spokeswoman, Lauren Hitt, declined to provide details on what he is considering. But she said Kenney, who in May won the Democratic nomination for mayor, is looking to reduce the city's prison population while ending what she called "the epidemic of nonviolent offenders being kept in prison because of their inability to make nominal bails."

As recently as Monday, Kenney's staff and stakeholders met to discuss options for bail reform. "It's clear that everyone shares that common goal," Hitt said.

Inmate advocates have long argued that bail unfairly burdens the poor, and their criticism has gained some traction in recent years in other quarters. Across the country, broader prison reform has increasingly drawn bipartisan support, as it addresses both humanitarian and fiscal concerns. New Jersey's legislature last year passed changes that allow judges, starting in 2017, to release certain inmates without bail before trial, a measure supported by Gov. Christie.

In Philadelphia, about 75 percent of the city prison system's approximately 8,000 inmates are awaiting trial. Advocates have said that on any given day, hundreds likely are detained on low-level offenses because they cannot pay relatively small bail amounts. 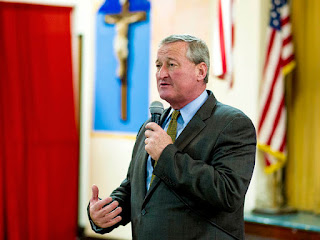 Advocates may say, but few would doubt, that there are several hundred individuals detained in Philadelphia on any given day because they cannot make bail on low-level offenses.  Depending on the definition of "low-level," the number may be in four figures.

The city recently received a $150,000 grant to study means of reducing its inmate population and officials are unsure of their eventual approach. However, the Inquirer continues

Under New York City's $18 million plan, announced last week, as many as 3,000 people will be placed in court supervision programs as an alternative to bail.

Providers will use a risk assessment tool to pick eligible candidates and determine the level of supervision, including regular check-ins or connection to services that address specific needs.

Separately, New York City Council last month said it was looking to create a $1.4 million fund that would be used to cover bails of $2,000 or less for defendants who cannot afford to pay.

The de Blasio Administration, as this New York Times article from April describes, is taking numerous steps to reduce its population of detainees. However, the primary principle which should guide any approach is understood by a former correction commissioner who is quoted as noting "Speedy disposition of justice is just an incredibly important moral obligation for a state. These are pretrial; they're not guilty of anything."

Actually, some of them are guilty. But they haven't been found guilty, at least not yet, and deserve some consideration.  However, whether in NYC. Philadelphia, or elsewhere, giving the individuals their just due- if done properly- will not come cheaply.

Releasing more inmates before their case is heard will endanger the city unless there is adequate supervision.  That will not be the case if- as in New York- monitoring of the defendants is outsourced to a private company.  Accountability will be greater, and standards applied more uniformly and consistently, if supervision remains in the public sector. Judges are not employed by a private company and neither are prosecutors. The same should apply to the professionals who will be ensuring (as much as possible) that the defendants remain arrest-free and returned to court as scheduled.

There will be other costs, as New York City will learn. Mayor de Blasio wants all defendants to be scheduled within 45 days. Additional judges, prosecutors, public defenders, and probation officers (or whatever the City chooses to call them) will be needed to process the cases. In their absence, there will be irresistible pressure to issue 'get out of jail free' cards.

Once the  research is completed and a strategy implemented, Philadelphia officials very likely will succeed in their effort to prevent city jails from being cells for holding defendants because they are too poor to meet bail for a relatively minor offense.  But they will endanger the public  safety unless they are committed to spending a substantial amount of money on hiring real people to perform an important job.