(The imperial) "we" return to Ben Schreckinger and Jonathan Topaz, who on Monday claimed in Politico

Still, many of his most important positions today fall well outside the traditional parameters that have bounded American political discourse in recent decades. He wants to raise the marginal tax rate for top earners to more than 50 percent — which would be the highest rate in 30 years and is more than 10 points higher than Barack Obama proposed as a candidate in 2007. He says he would replace the Affordable Care Act — perhaps Obama’s signature accomplishment in office and a prized victory for Democrats — with a Medicare-for-all, single-payer system, a position that was too liberal for Dean when he was governor of Vermont. (Sanders’ standard Obamacare line is to quickly laud its “modest gains” but quickly say it isn’t enough.)

The Affordable Care Act has achieved the "modest gains" noted by Senator Sanders, who has stated "We have got to grapple with the fact that we remain the only country, major country, without a national health care program."   Among other problems wrought by the ACA, many doctors are dropping out of exchanges, as illustrated by Stacey Burling of The Philadelphia Inquirer when she wrote

When economist Dan Polsky set out to study how many doctors were in the health-insurance networks available to Obamacare customers, he found out it was hard - even for him.

"Nine out of 10," said Polsky, executive director of the University of Pennsylvania's Leonard Davis Institute of Health Economics.

He concluded that many of the 10.2 million people who have bought insurance through the Affordable Care Act marketplace probably don't realize they are giving up access to many physicians and hospitals in order to get lower premiums.

He and colleague Janet Weiner learned that 41 percent of health plans at the midrange "silver" level included fewere than 25 percent of physicians in their  area, making them "narrow networks."

Cancer patients in particular often want to see topflight doctors, but in oncology, 59 percent of networks were classified as narrow.

Polsky said insurers need to do more to help shoppers determine who is in the network they are considering. Otherwise, he predicted, lawmakers may set specific limits on how narrow networks can be. The Affordable Care Act says only that networks must be large enough that "all services will be accessible without unreasonable delay."

Kathy Hempstead, who directs work on health-insurance coverage for the Robert Wood Johnson Foundation, said consumers using the exchanges deserve better information. "They don't have the information they need to support their decisions," she said. "You're only able to see the trees and not the forest." The foundation funded the Penn research.

Antoinette Kraus, director of the Pennsylvania Health Access Network (PHAN), said her organization, which helped people sign up for Obamacare insurance, is "definitely concerned" about small networks and is keeping a close eye on problems customers are encountering.

"It's great to get people health insurance coverage, but we want to make sure people can use that coverage," she said.

To most laypeople, ease of using the service is critical. But it's not so obvious to journalists, politicians, and others who believe that a major piece of legislation is valuable as "a signature accomplishment in office" apart from its actual value to actual individuals and families.

Between Democrats who celebrate Obama's health care reform and Republicans who gin up opposition by misleadingly claiming it has ushered in government control, typically lost is the reality that the Affordable Care Act would have done Rube Goldberg proud.  Burling continues

So far, patients have been most confused by tiered plans. These plans may have relatively large networks, but there are extra co-pays and deductibles when customers go to certain doctors and hospitals.

Patrick Keenan, PHAN's director of navigation, said plans with smaller networks were introduced before the most recent enrollment period. Subscribers were optimistic that they could get the doctors they needed, but Keenan said subscribers sometimes struggle with getting a physician with convenient hours in their neighborhood.

As of March 2015 HHS reported a total of 16.4 covered due to the ACA between the Marketplace, Medicaid expansion, young adults staying on their parents plan, and other coverage provisions. According to Gallup that translates to an uninsured rate of 11.9% down from a high of 18% in 2013.

According to the US Census Bureau, before the ACA in 2009 about 48.6 million or15.7% of the population was uninsured.

The improvement is graphically demonstrated below, from that site.  In 2009, before the Act was passed, 14.6% of individuals at least 18 years of age were uninsured, and by 2015 the percentage was down to 11.9%. That is, in the timeworn phrase, nothing to sneeze at. 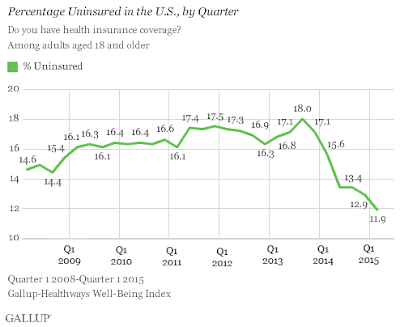 Nonetheless,it is far less of a drop than was inferred, implied, and occasionally even promised by supporters.  Democrats won't tell you that for obvious reasons; Republicans won't tell you that because it would draw attention to the millions of Americans who have obtained health care they otherwise wouldn't have. (And a bunch of conservatives probably are happy, for ideological or strategic reasons, that the number of insured isn't higher.)

Much of the blame goes to Repub governors who have not taken advantage of the opportunity to expand Medicaid, buttressed by the Supreme Court's decision which blocked the federal government from eliminating program subsidies to states which refused to expand eligibility.  Evidently, the intransigence was unexpected by the Administration, understandable given the harm which came to the poor when a state government  found its 10% contribution would be burdensome. (It may be too generous to assume that cost was the primary factor.)

It may be unfair to argue that the Administration was responsible for being caught unprepared.  Still, whatever the motivation, it stands as a failure of the legislation, though insufficient to conclude that the Affordable Care Act wasn't a success overall. It's an improvement and, technically, the President's signature achievement. However, most individuals- and Bernie Sanders- know that it is  simply Tnot good enough.