Look In The Mirror

Two influential House Democrats are pushing the Obama administration for a review of federal law enforcement policies that led to the release of an undocumented immigrant now accused in the fatal shooting of a woman at a San Francisco pier this month.

House Minority Leader Nancy Pelosi (D-Calif.), who represents San Francisco, and California Rep. Zoe Lofgren, the top Democrat on the House panel on immigration, are asking for the review. They suggest in a letter being released Wednesday that Juan Francisco Lopez Sanchez, the suspect in Kathryn Steinle’s killing, should not have been released directly to San Francisco officials.

“Whenever an innocent person is lost to violence, as a society we should consider what steps we can take to make our communities safer,” Pelosi and Lofgren write the letter, provided to POLITICO in advance of its release Wednesday. “Moving forward, we believe San Francisco and the Departments of Homeland Security and Justice should improve communication to ensure all interests are weighed in future cases.”

No one can argue with the idea of improving communications- well, no one but sanctuary city advocates, anyway.  Min Kun continues

The letter is addressed to Attorney General Loretta Lynch and Jeh Johnson, the secretary of the Department of Homeland Security.

That’s according to federal policy that calls for all criminal matters to be resolved before immigration officials take over a case, the letter says. After he was released, authorities allege, Lopez Sanchez shot and killed the 32-year-old Steinle on the pier in broad daylight on July 1.

The San Francisco request took precedence possibly because immigration violations are considered administrative, not criminal.   Still, we learn that enforcement of the law may be labeled "rigid adherence to policy," given that

“In some circumstances, rigid adherence to this policy may not actually serve the interests of justice,” Pelosi and Lofgren wrote. “Rather, where the outstanding criminal warrant pertains to a particularly old charge not involving violence or serious damage to property – as was the case here – and the state or local prosecutor is unlikely to proceed with a prosecution, there is no purpose to be served in deferring deportation.”

Pelosi and Lofgren are criticizing federal- not state- policy. They are ignoring the central issue- existence of sanctuary cities, which in a rational world might be of interest to pols concerned about "communication." They have yet to question the propriety of a city not informing the federal government when an individual in the nation illegally has been arrested for a criminal offense.

Pelosi/Lofgren refer to "a particularly old charge not involving violence or serious damage to property," which, according to this report, "involved a small amount of marijuana." But as the Los Angeles Times has reported, Lopez Sanchez previously had been convicted of "at least four felonies for possessing heroin and manufacturing narcotics and a misdemeanor conviction for inhaling toxic vapors."  And since he was apparently arrested with the marijuana, he was caught and prosecuted on three occasions by the federal government after attempting to enter the country illegally and convicted at least three times.

As the local prosecutors were aware, this was not some poor black kid who shoplifts a quart of milk from the local grocery store. This was a person who was capable of murder.  Not a likely murderer, but someone whom it was difficult to prosecute largely because local authorities had been able to avoid the issue for some sixteen years.  If the marijuana charge were to be dismissed, authorities in California had the ethical responsibility to notify ICE.

The city did not do so because

Handed over to the San Francisco County Sheriff's Department in March on a bench warrant for a 20-year-old marijuana sales case, he was cut loose when prosecutors declined to charge him.
U.S. Immigration and Customs Enforcement had lodged an "immigration detainer" with the Sheriff's Department asking to be "notified prior to his release," but "the detainer was not honored," ICE spokeswoman Virginia Kice said in a statement.

The detainer was not honored, though that appears to be consistent with passage in California in 2013 of the Trust (Transparency and Responsibility Using State Tools) Act, which "sets clear, uniformed standards to limit burdensome detention of aspiring citizens by local law enforcement solely on the basis of federal immigration detainer requests." Under these terms, the federal immigration detainer request could not be honored.

That quoted passage was included in a letter written in August, 2013, (successfully) urging Governor Jerry Brown (who earlier had vetoed a bill which would have limited even further the ability to hand individuals over to immigration authorities) to sign the legislation. The third signature belonged to Zoe Lofgren. The first belonged to Nancy Pelosi.

The killing of Kate Steinle was a tragedy, a crime, an abomination. it also was partly the result of one level of law enforcement defying the request of another level of law enforcement. This has happened many times before, but most notably in the events leading to the terrorist attacks of September 11, 2001. There was a lack of communication, as Pelosi and Lofgren suggest- and they helped make it so. 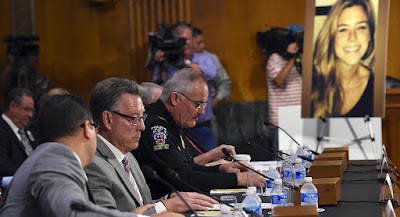