It Should Kill His Campaign. It Won't.


For a couple of months last winter, the top political question was: will he or won't he? will Willard Mitt Romney make a third run for the presidency/

Eventually, the former Massachusetts governor announced that he would not be a candidate. Evidently, however, the man who made elitism his running mate with his 47% remark has now under an assumed name, "John Ellis Bush," stated

My aspiration for the country and I believe we can achieve it, is 4 percent growth as far as the eye can see. Which means we have to be a lot more productive, workforce participation has to rise from its all-time modern lows. It means that people need to work longer hours and, through their productivity, gain more income for their families. That's the only way we're going to get out of this rut that we're in.

From the end of WWII until the 1970s productivity in the U.S. and median wages grew in lockstep. But from the late 1970s until today we've seen a divergence, with productivity growing faster than wages. The divergence indicates that companies and the people who own and run them are doing much better than the people who work at the companies.

"We have to be a lot more productive," says John Ellis Bush, of workers whose productivity has grown 240% since 1970 and have seen their average wages grow by approximately a third of that (graph from Mother Jones, below).  "People need to work longer hours," says the fellow who made at least $1.85 million each year, from when he left the Florida statehouse in 2007 through 2013. Most of that came from speeches, in which he presumably bemoaned Americans not so lucky as to be born to the family Bush. 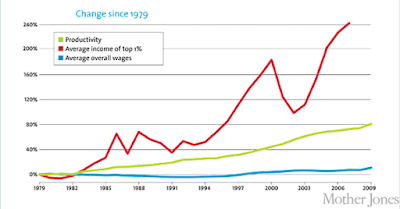 Employed Americans have been working longer hours. What they need, as the maps below (also from MoJo) indicate, is the assurance of time off each week, which all but 15 other nations give their workers; paid annual leave, denied in only eight other nations; and paid maternity leave, lacking in only five other countries. 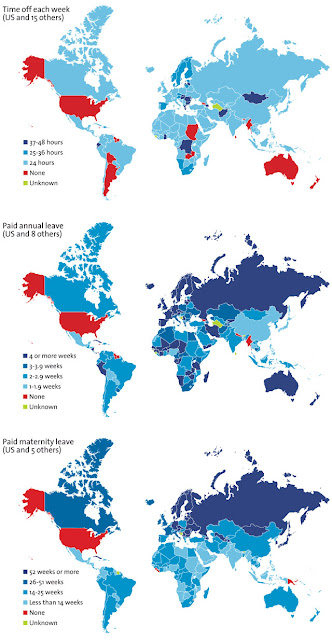 Perhaps a Bush, believing the USA began to fall apart on January 20, 2009 might not notice

Wage stagnation is a decades-long phenomenon. Between 1979 and 2014, while the gross domestic product grew 150 percent and productivity grew 75 percent, the inflation-adjusted hourly wage of the median worker rose just 5.6 percent — less than 0.2 percent a year. And since 2002, the bottom 80 percent of wage earners, including both male and female college graduates, have actually seen their wages stagnate or fall.

Charles Pierce is outraged at the media's favorite candidate as only he can be, writing

Holy Jesus H. Christ on a furlough, there's your "47 percent" moment for this cycle. What is it with this guy and with that other Florida Man, Marco Rubio? Is the sun so bright that neither of them sees the rakes until it's too late? Every legitimate survey demonstrates that Americans are working longer hours for wages that pretty much have remained flat for 30 years while most of the country's wealth was being shoved up to that level of the economy wherein reside Jeb (!) and his family of entitled layabouts. This is pure Romneyism in action. This one statement should kill his campaign. It should be hung around his neck like a dead raccoon until the last ballot of the 2016 election is cast. If it's not, it's only because some people will do anything to keep this guy viable because he allegedly is more "serious" than many of the other presidential candidates. Those people are wrong.

John Ellis Bush may be more "serious" as in having a much better chance of being nominated than Carly Fiorina, Bobby Jindal, and a couple of others who believe the same things but couldn't get away with saying them.   He is no more moderate than they are; he merely looks reasonable, as any Bush must, and is confident of his entitlement.  This is one of your three Repub front-runners, a guy who thinks the economy is ready to take off once Americans get off their rear end and start working.