Back To Rubio And Cruz


Steve M. realizes that the Republican caucus results last night were bad news for the Democratic Party. He writes

We seemed to be on the verge of a Republican crack-up. Instead, last night we got a better-than-expected performance by someone who might be able to keep the party patched together. I hope someone -- Trump, Kasich ... hell, even Jeb -- humiliates Rubio in New Hampshire next week. If not, I hope Trump and Cruz cleans his clock in South Carolina.

Rubio's surprisingly strong second-place finish was not the worst of it for Democrats. Rather, it was the defeat of the "ignorant bigot" who, though he "has created a particularly toxic strain of Republicanism"

poses a threat to the Republican Establishment -- he tarnishes the GOP brand by saying out loud what other Republicans say in code, and while his agenda may overlap with that of the GOP's power brokers on many issues, he wouldn't just take an ALEC or Grover Norquist agenda off the shelf and run on it, much less govern by it. I think a Trump presidency would be a nightmare, but it would be a singularly Trumpian nightmare -- it wouldn't be a tactical advance in the long war being fought by the Koch brothers and their allies. And we might never get to that point, because Trump would be a weak general election candidate, at a time when the Democrats are going to have a weak candidate of their own.

Ia case of "be careful what you wish for," while Democratic politicians and progressive blogs everywhere condemned Donald Trump the last few months, looming ahead were two much greater threats to the Democratic Party: Marco Rubio and Ted Cruz.

Steve M. warns "if Marco Rubio is the nominee, he will win. Take that to the bank."  But although the Florida Senator would seriously jeopardize the election of Hillary Clinton (or Bernard Sanders), Ted Cruz should not be taken lightly.   Bill Maher has commented "There’s a reason why the big question about Ted Cruz is always, “When he shaves in the morning, how does he avoid spitting in the mirror?"

That might, however, not be only the big question about Ted Cruz- it might be the only question. Although he is a political extremist, so too is Marco Rubio. Cruz appears to be more radical, which goes to Maher's remark, but he is a better campaigner and smarter than Rubio. And for what it's worth:  if he comes under withering assault, the Texan will have less difficulty than the Floridian under the same circumstances.  As Charlie Pierce recognizes (and Chris Christie has demonstrated) of Rubio, "if you knock him one inch off his talking point on a particular issue, he's lost and floundering" (photograph below from CNN).

While Steve M. is correct to describe Marco Rubio as "dangerous," there should be no assumption that he would be elected if nominated. He still has exhibited severe difficulty with personal finances, is evidently confused about religion, and has been for immigration reform before he was against it.   Unfortunately, now that the GOP frontrunner has been wounded, Democrats have to be concerned that they won't be able to run against a guy who doesn't know the difference between a collection plate and a communion plate . 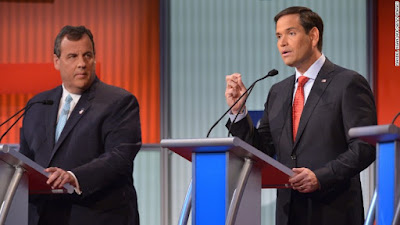