And today, there are voices in this world, particularly over the Internet, who are constantly claiming that you have to choose between your identities -- as a Muslim, for example, or an American.  Do not believe them.  If you’re ever wondering whether you fit in here, let me say it as clearly as I can, as President of the United States:  You fit in here -- right here. (Applause.)  You’re right where you belong.  You’re part of America, too.  (Applause.) You’re not Muslim or American.  You’re Muslim and American. (Applause.)

The  President condemned hate crimes in the USA and courageiously acknowledged "there are Christians who are targeted now in the Middle East" and Jews who in France and elsewhere who "feel themselves under assault- sometimes by Muslims."

However, the President stated also

So let’s start with this fact:  For more than a thousand years, people have been drawn to Islam’s message of peace.  And the very word itself, Islam, comes from salam -- peace. The standard greeting is as-salamu alaykum -- peace be upon you.  And like so many faiths, Islam is rooted in a commitment to compassion and mercy and justice and charity. Whoever wants to enter paradise, the Prophet Muhammad taught, “let him treat people the way he would love to be treated.”  (Applause.) For Christians like myself, I’m assuming that sounds familiar.  (Laughter.)

People have drawn for more than a thousand years to Islam's message of peace, just as they have been drawn for at least as long as that to Christianity's message of peace. However, as this piece (written nearly four  years ago, before some of the more egregious examples came to light) indicates, religion has been the primary motivator of the Crusades,The Thirty Year War, the strife in Northern Ireland, "numerous religious wars of England and France," and more recent wars in Yugoslavia, Iraq, and Afghanistan. It goes on and on, with religions- Islam and Christianity included- being responsible for much evil and much good in the world. "Faith" has proven a handy rationale for scoundrels and the well-meaning alike..

But Muslim activists Asra Q. Nomani and Ify Okoye painted a different picture of the chosen mosque when Wednesday they wrote

This past weekend, dozens of girls and boys as young as about 8 years old ran up the stairwell to the main entrance of the musallah, or main prayer hall, of the Islamic Society of Baltimore, where President Obama visits Wednesday in his first presidential visit to a U.S. mosque. As the children rounded the corner, a stern mosque Sunday school teacher stood before them, shouting, “Girls, inside the gym! Boys in the musallah.”

The girls, shrouded in headscarves that, in some cases, draped half their bodies, slipped into a stark gymnasium and found seats on bare red carpet pieces laid out in a corner. They faced a tall industrial cement block wall, in the direction of the qibla, facing Mecca, a basketball hoop above them. Before them a long narrow window poured a small dash of sunlight into the dark gym.

On the other side of the wall, the boys clamored excitedly into the majestic musallah, their feet padded by thick, decorated carpet, the sunlight flooding into the room through spectacular windows engraved with the 99 names of Allah, or God, in Islam. Ornate Korans and Islamic books filled shelves that lined the front walls.

And it didn't have to be that way. Obama did not have to go to that particular house of worship to bring his message of acceptance and inclusion because (emphasis mine)

Today, in an estimated two-thirds of mosques around the United States, women and girls are segregated in dark basements, sparse balconies, separate rooms and even behind shower curtains in the “sisters’ section,” listening to Friday sermons piped in through shaky sound systems and watching them, if we are lucky, via TV screens.

There are mosques in the USA in which women are not segregated. As the 2011 report to which Noman/Okoye link reveals, "two thirds (66%) of mosques sampled use dividers to demarcate women’s prayer spaces during daily prayers. This percentage has also not changed over the past decade."

That leaves one-third which do not. None of those was honored with a visit while the leader of the Free World chose to extend a hand of friendship where "on any given day a woman or girl worshiping in the mosque would be dispatched away from the musallah where he will stand to speak out against 'Islamophobia,' to the 'prayer room for females,' as one worshipper described it."  Noman and Okoye

believe it is the role of government to protect women’s rights within religion, if a place of worship gets federal nonprofit benefits, just as it protects civil rights in the secular space. Places of worship in the U.S.would not be allowed tax-exempt status if, for example, they were to seat African Americans in segregated spaces. To condone the mosque’s gender segregation is particularly ironic coming days after the White House announced efforts to win equal pay for women and increased workplace benefits for women in the military.

It's ironic, but not surprising.  While robustly applauding the breakdown of barriers to same-sex marriage in the USA, the left can at most manage a "tsk, tsk" at the brazen discrimination practiced among some of those recognized by President Obama as Muslim and American.

Noman and Okoye refer to it as "gender apartheid."  However, I refer to it as segregation, practiced 62 years after Brown v. Board of Education of Topeka and 52 years after discrimination in public accomodations was outlawed. Houses of worship, including mosques, can segregate males and females as does the Islamic Society of Baltimore. But the President of the United States of America should not celebrate it. 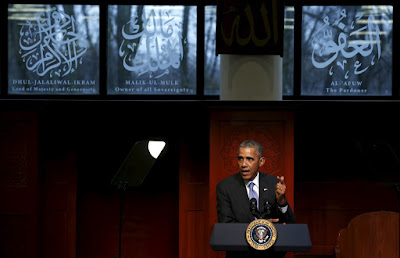