The Pie In The Sky Was Eight Years Ago

It is not a death match and indeed Marcotte refers to it as a "dialogue." Marcotte actually appears to prefer Sanders' position on the issues while O'Hehir concedes "on many issues the two candidates aren’t as far apart as they appear." He explains

despite the sturm und drang of the moment I’m still inclined to believe Nate Silver’s thesis that the Democratic outcome is virtually foreordained. Another reason is that Amanda’s argument that Hillary Clinton represents a pragmatic option for governing the country in the near term and restoring some semblance of political order and sanity, while progressives build better options for the future, should be taken seriously by Sanders supporters. Because you are likely to hear some version of it coming out of Bernie Sanders’ mouth, sometime between April and July.

O'Hehir  appears to recognize that Marcotte's strongest point probably is

The presidency is an executive office. Clinton’s more pragmatic approach to politics means she’s more suited to that work, which is about executing the existing law in ways that best get you closer to liberal goals. The job isn’t about passing single-payer healthcare. It’s about running the health and human services department. Sanders has failed to persuade me that he really, truly gets the difference, and so I can’t, in good conscience, support nominating him over Clinton.

Both Marcotte and O'Hehir recognize that the objective of the next Democratic presidency is to get closer to progressive goals. However,although he isn't confident "this is that moment," O'Hehir argues- borrowing from a French philosopher-

“if we accept the inevitability of the unbridled capitalist economy and the parliamentary politics that supports it” — and that is precisely the position of Hillary Clinton and the Democratic Party — and if we do not put an end to the “linguistic terrorism” of the neoliberal age, which has forbidden words and ideas like “socialism,” we cannot imagine such a world, let alone create it.

The fight between Clinton supporters and Sanders supporters has been played out in Salon for months ago, not always as reasonably as between these two exceptional writers. Context is provided in part by checking in on their stances in the presidential race of 2008. Marcotte originally was a supporter of the arguably one progressive, inarguably somewhat populist, candidate among the three initially viable hopefuls. Forced out as a blogger for Edwards in a faux scandal, Marcotte switched  her support to Obama.

Seven-plus years later, as she was transitioning from blogging for Raw Story to writing for Salon, Marcotte would maintain

Bloggers, liberal bloggers anyway, set out to change the way we talk about politics in this country. We wanted a more liberal Democratic Party. We wanted social justice issues at the center of the conversation. We wanted the war to end. Those things happened,

We "wanted the war to end" but there currently are thousands of American soldiers in Iraq, Afghanistan, and Syria, albeit not directly in combat.  The Taliban have made major advances in Afghanistan, ISIL still controls large swaths of land in Iraq and Syria, and in the latter nation, the USA faces the Hobson's choice of now either trying to destroy ISIL and the Baathist regime or ISIL alone (which Sanders views more realistically than does Clinton).  Admittedly, social justice issues are "at the center of the conversation"- in the Democratic Party- but only because there has been very little "change we can believe in."

That doesn't make Andrea Marcotte a hypocrite, any more than I am for supporting Mrs. Clinton eight years ago, despite her support for making abortion "safe, legal, and rare," a concept Republican-controlled states are embedding in onerous anti-choice legislation (graph below from 2013, but you get the idea), and one Clinton she has not renounced (nor has any reason to, now that reproductive rights organizations such as Planned Parenthood, NARAL, and Emily's List have endorsed her). 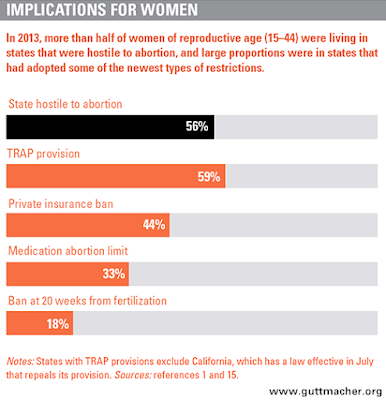 But it does raise questions, chief among them being why an individual who (eventually) supported the candidate of hope and change over Hillary Clinton now finds Clinton so eminently befitting the presidency.  Understandably, eight years ago, she supported someone with great promise, who had become a member of Congress not quite four years earlier. Now, she believes a US Senator who has served a quarter of a century in the United States Congress is less suited for the presidency and unrealistic about the chance of achieving policy goals.

"Effecting change is not about making really big promises and posturing about how you're more socialist than thou," Marcotte contends. That is more than a cheap shot coming from someone who supported Barack Obama, the candidate of huge, unfulfiled promises. (it was not so long ago that the Affordable Care Act was touted as reform which would insure 40-45 million more Americans. It has fallen qute short of that.)   She also knows Bernie Sanders is principled, not stupid, and has not "postured" about being "more socialist than thou."

Similarly, Marcotte would be more forthright were she- as a 2016 supporter of HRC- to acknowledge that she was wrong four years ago to favor a relatively inexperienced candidate rather than a woman who, unlike Obama, had gained the respect of colleagues while serving in the U.S. Senate.

Admittedly, Bernard Sanders is not Barack Obama, though both have inferred that their election ultimately would bring about dynamic reform. However, it is disquieting that the commitment to principle which separates Sanders from Obama would be used as more of a disqualifying, than qualifying, criteria for the presidency.